I'm joining in with Five on Friday, hosted by my very lovely (I know this as I have had real actual coffee with her a few times) friend Amy from Love Made My Home.

I think this falls within the rules but it feels slightly cheaty as it's not really five things, more really just five photos of the same thing. But it is a Very Exciting Thing (well to me, anyway). As I don't have enough yarn in my life (ahem) or enough projects in the go (ahem again) I've decided, slightly belatedly, to join in the Moorland Blanket CAL with Lucy of Attic24 - hurray! 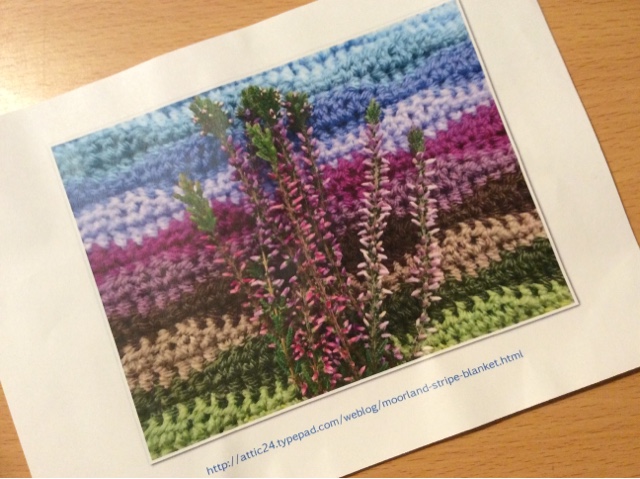 Honestly I've been longing to make this blanket since Lucy first introduced it on her blog back in November or so. Now, bear with me while I seem to go off on a tangent - until my late 20's (I stopped around the time I met my husband) I holidayed in the Highlands of Scotland with my family (as in my parents and my brother). My parents were very big on golf (Mum still is) so my brother and I sort of grew up on golf courses, and the place we went to - Dornoch - has a championship golf course, and also the most amazing beach. A really stunning natural beach, there were no places to rent deckchairs, no lifeguards, no public toilets, just beautiful, rugged, unspoilt beach, edged by the sand dunes with the golf course just the other side. At the time I was very jealous of all my friends jetting off to Majorca or Spain, and coming back with amazing suntans, whereas I came back with sand in my shoes, a bit of sunburn if I was lucky, and a stick of rock. Looking back though I think our holidays in Dornoch were pretty idyllic - from when I was aged 4 we went to the same hotel at the same time each year, along with several other families from Scotland, England, and even the U.S. Going to Dornoch was the only way we knew each other and we met up for the exact same two weeks every year. There were at least 20 of us kids, and the adults all played golf - some of the kids did too. The adults would take it in turns to take a day off from the golf to look after the kids, we played in the gardens (swing ball, cricket, hide and seek) or if it was raining we'd get taken to the swimming pool in the next town. There would be at least 8 children crammed in each car, there were no car seat regulations in those days. We'd play in the hotel lounge if it was wet (card games, jigsaws, colouring, messing about with walkie talkies and whoopee cushions LOL), and get coke and crisps from the bar, and if it was dry (note - not necessarily warm) we'd go to the beach for some fun but chilly swimming, kite-flying, making sand castles, exploring rock pools. When we were teenagers we had barbeques on the beach, the girls discussed boys, the boys probably discussed girls, some of us dated each other and there were even 2 weddings eventually. The town of Dornoch is very small so we could walk from the hotel to the golf club or the beach, and we had endless freedom, just appearing back at the hotel (or the golf club) at mealtimes. Really wonderful times. At the end of the two weeks I would cry the whole way home as I knew I wouldn't see everyone again for a whole year. The whole thing was just magical, it was pure luck that we found the hotel, and that everyone else went there at the same time, as young kids we all felt like brothers and sisters. I really wish my children could have had the same experiences, but as I said it was like a little bit of magic, and you couldn't replicate it if you tried.

Aaaaanyway, back to the CAL. The reason I mentioned holidaying in Scotland is because so many of my memories feature us on the beach, and in my mind's eye I can see the golden sand, the blue skies, the yellowy-green of the sand dunes, and the purple heather edging the lush green of the golf course.
The moorland palette really is the same as the Highlands palette, so for me the blanket will really be a Highlands blanket, and it will always remind me of Dornoch. 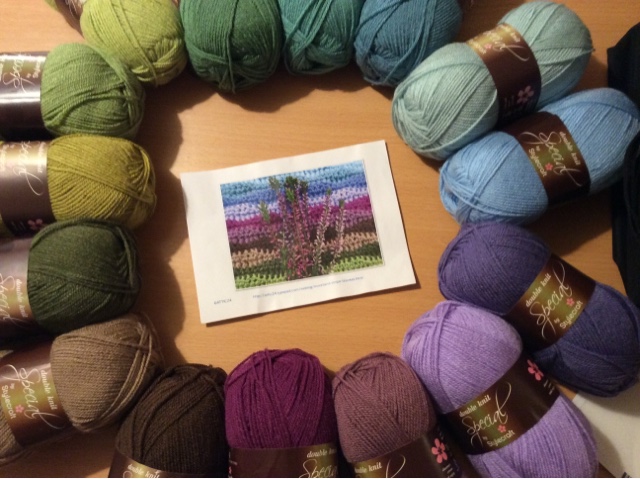 So, back to the moorland pack. Lucy was introducing it and tempting us with lots of photos before Christmas, so it would have been a perfect Christmas present for the hubby to get me. This wasn't going to happen though as I had already asked for some other wool (more on that another time). Plus I knew hubby would then want to bring it in the car to NIreland for me to open on Christmas Day, and the car would be already very, very full with 5 suitcases (3 contained just presents!), 2 adults, 3 not very little Little People, various backpacks, one dog, and one dog's crate. And no, we don't have a roof-box or a trailer, just a Mum (me) who is exceedingly good at packing a car boot (I get that from my Dad who showed a similar skill set every year when packing for Dornoch). Plus if I got it for Christmas I 'd have to wait til the official start date of Jan 6th before getting going on it - how frustrating would that be! And finally then there's the fact, pure and simple: I. Don't. Need. Any. More. Wool.

I very strictly told myself I didn't need it, had enough wool, and enough WIPs, and to just forget about it.

Kept thinking of those gorgeous colours all together .... and of course kept seeing updates on Lucy's blog ..... and there was the draw of a new project .... in the end, how could I resist? 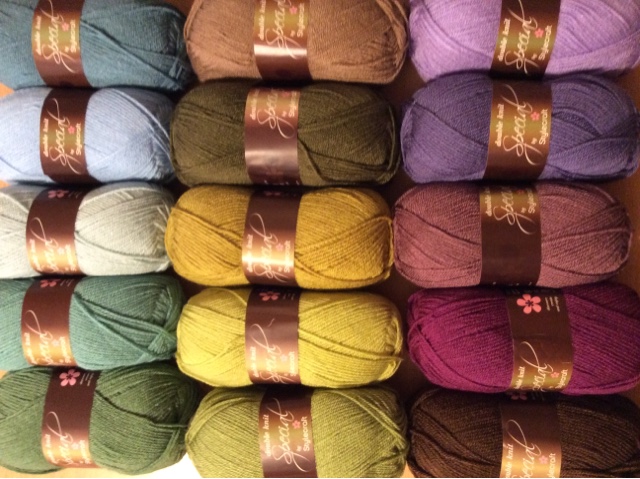 I went ahead and ordered the pack quite late one evening this week, and without my glasses on. I often feel if I order stuff with no specs on then it isn't really real and doesn't really count as a purchase. Bonkers, I know. Then I realised it was due to arrive on Saturday when hubby would be here. Aaargh! There's no way I could justify yet another wool purchase to him. But it was done, nothing I could do about it ..... However the doorbell rang at lunchtime today and there was my lovely postman holding a big squashy bag with a Wool Warehouse sticker - hurray hurRAY HURRAY!!! So not only did it arrive early, but hubby won't even have to know about it (one ball of wool is the same as the next to him, and he STILL calls my crochet my knitting - bless him).

This pack really is gorgeous, and there is something so delicious about an array of perfectly formed balls of wool, isn't there ? I just want to lie down on a bed made of balls of wool. A wool ball pi, no there's a thought :)

So Lucy lists all the colours in the moorland pack here, the yarn is all Stylecraft Special DK, and the pack includes some colours I haven't used before, so that is my excuse for ordering Yet More Wool :) 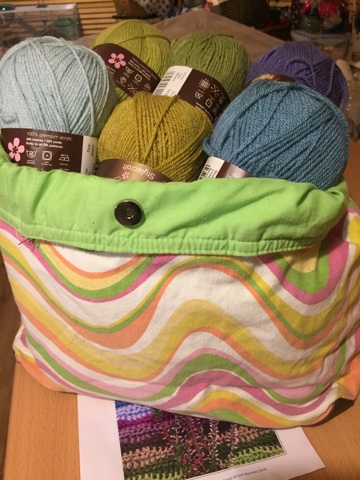 I'm storing it in my slightly too small but highly appropriate wavy bag. This was a present from my Mum years ago and also has beachy memories - when my Little People were a lot littler this bag was always our NIrish beach bag - usually to be found stuffed with towels, sun hats, sun cream (optimistic), hoodies, jackets (the beach in NIreland is not known for its heat...), biscuits, water bottles, bits of shell and stone, and bucket loads of sand (why is there always So Much Sand). The handle came off the bag a couple of years ago rendering it useless for the beach (sob) but it is perfect for storing a crochet project.

I'm going to be a Very Good Hooker and, as Lucy suggests, make a tension square with some random bits of Stylecraft Special DK from my stash. I don't want to make a tension square that is just useless, so I'm going to make it big enough to be a cushion cover for Little Miss, for her bedroom, using the colours below. In fact I think Lucy has made a cushion cover with this pattern, that's probably where I got the idea. 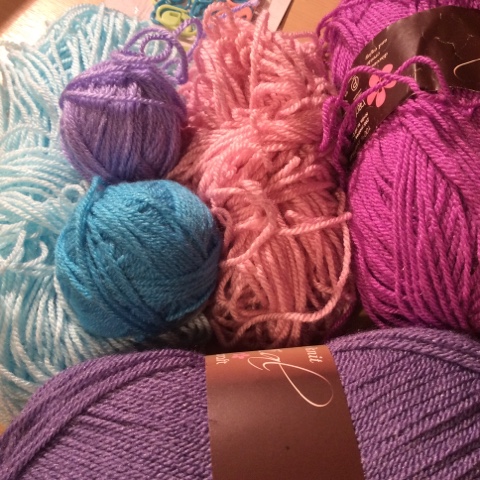 And of course I'll be updating you as I make progress on this CAL. Can't wait to get started and lose myself in that glorious Highland palette 😊

Til next time,
Jillxxxx
Posted by Jill at emeraldcottage at 19:15