I bet you thought I'd given up blogging at the 1 year mark .... well of course not :) Sorry about a slightly longer absence than usual but we've been busy having a really marvellous Easter holidays, I mean really tippity top. It's been one of those holidays where we've found the perfect balance of going out .... staying in .... doing lots .... and relaxing ..... There really has been much to be thankful for. 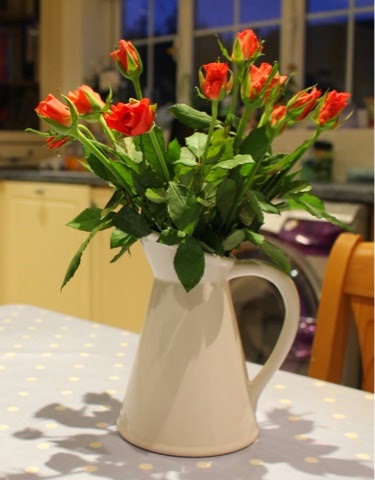 .... spring greenery from the garden 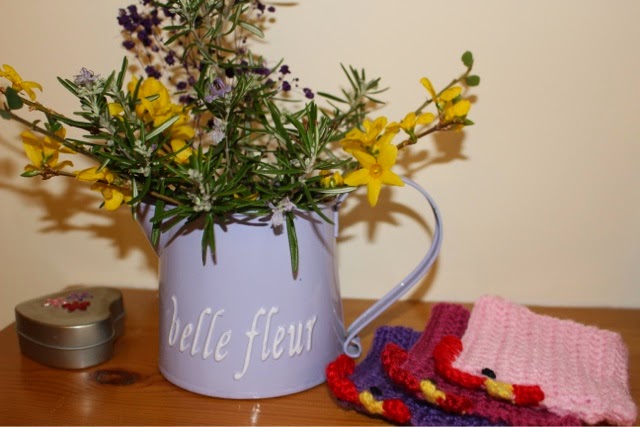 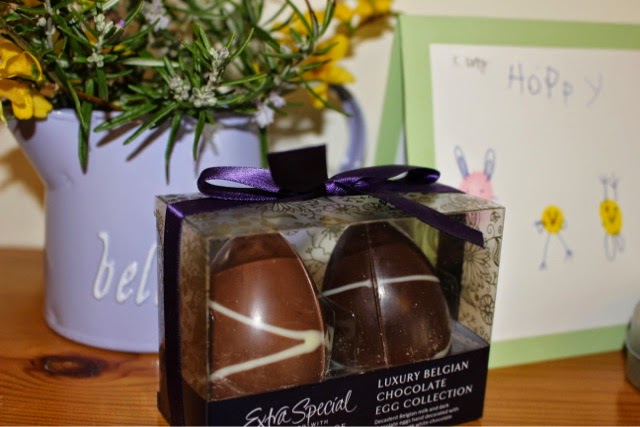 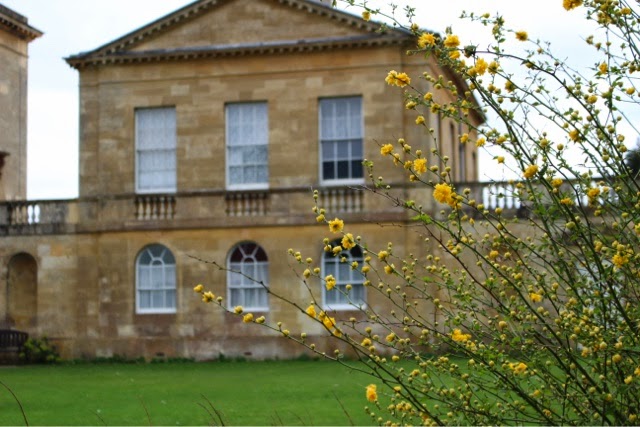 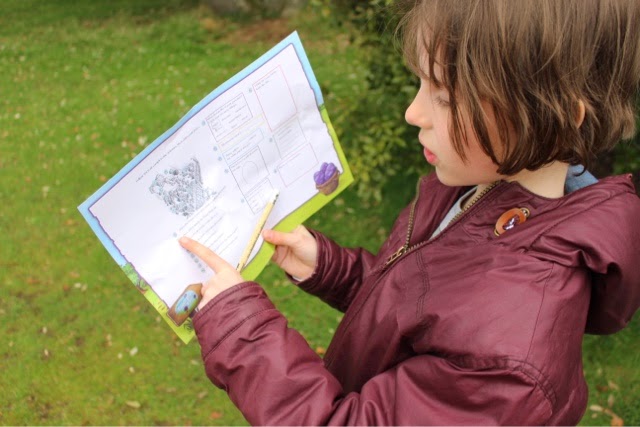 ... and admiring the beautiful blooms 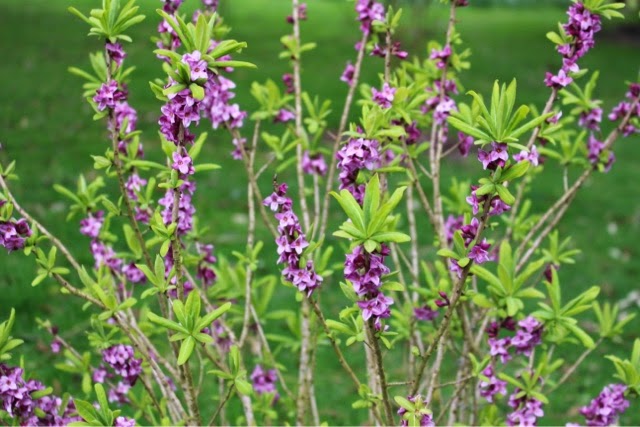 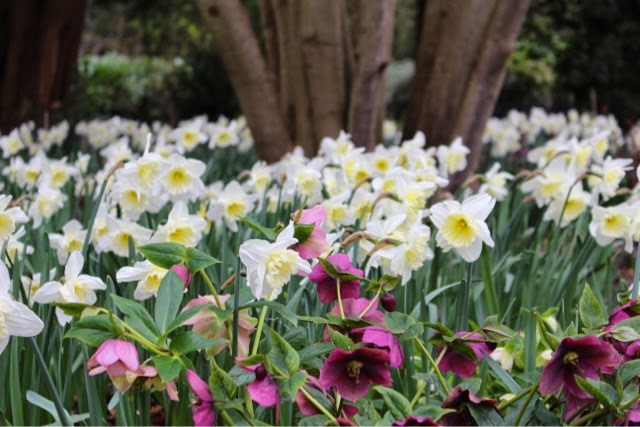 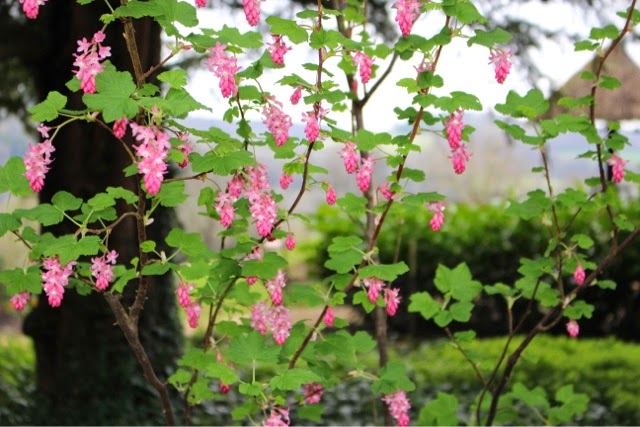 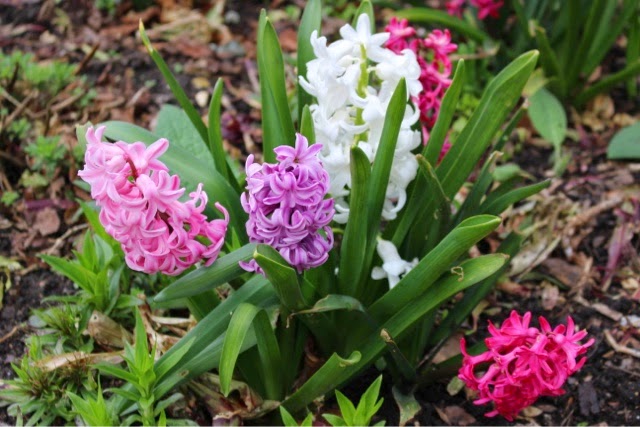 .... enjoying first crochet in the garden this year 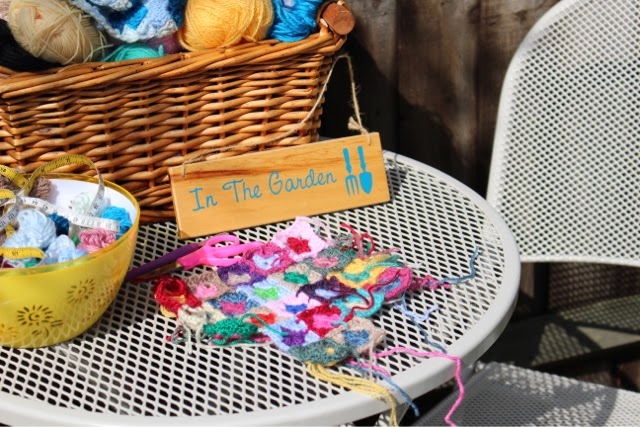 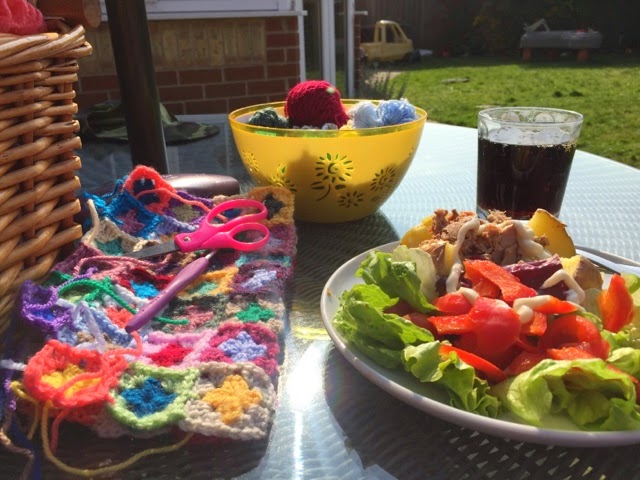 The weather has been fabulous here, I hope it's been as good wherever you are. We've really made the most of it with trips to the park, lots of time in the garden, Little Man and his friends have been out on their bikes and playing nerf-gun wars on the field, and the girls have been trampolining, playing hopscotch, making assault courses, skipping, ..... oh the list of outdoor pursuits goes on and on, its been so lovely to see them having all this wholesome fun :)

Just before Easter I had spotted these little chick beanbags on Pinterest. (http://www.petalstopicots.com/2014/03/crochet-chicken-pattern-little-chick-bean-bag-pattern) I decided to make a whole bunch so we could play beanbag games with them. And of course they had to be rainbow coloured. 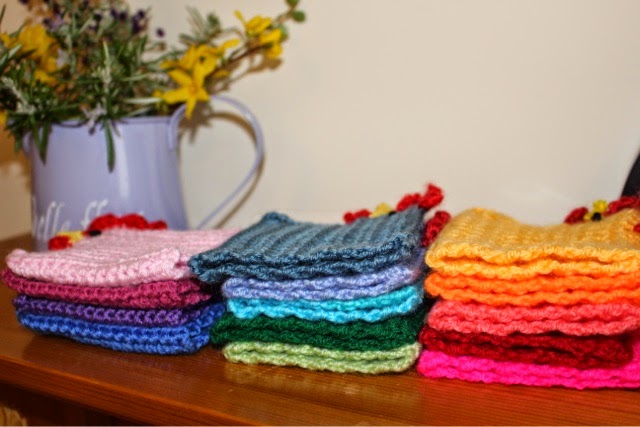 I tell you, this is a fab stash-busting project. Each chick is just a rectangle, twice as long as it is wide, then you sew it up at a strange angle, add on some of those red wobbly bits on their heads (should they only be for roosters ??) and some beaks and ta-daaaah ..... little beanbag chickens ..... 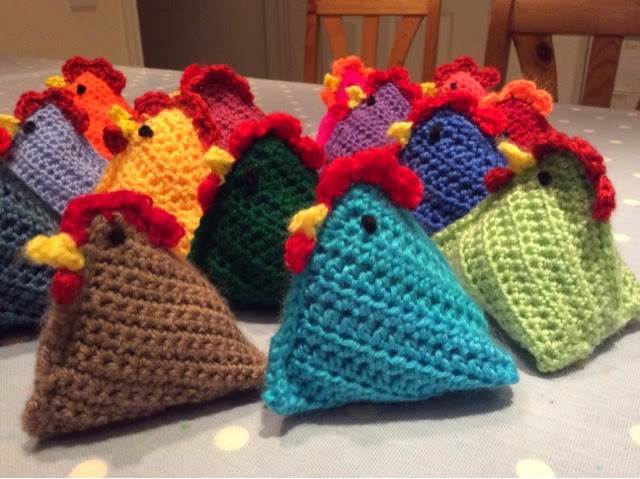 If you think they are looking rather menacing, you should have seen the first one I made with pointy eyes. Very Angry Birds.
In the absence of a suitable Easter bucket, we stuffed them all in a Halloween pail and took them outside for some beanbag fun. 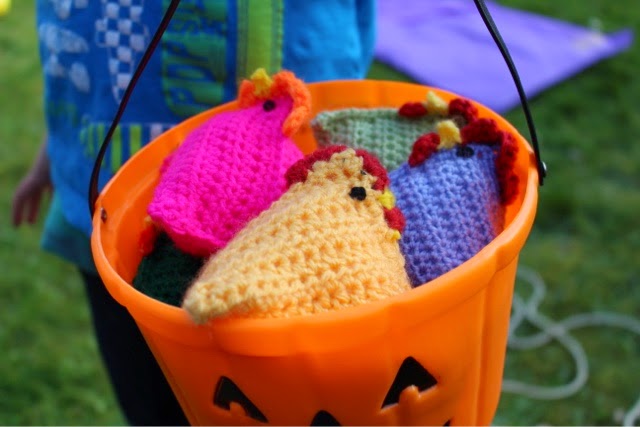 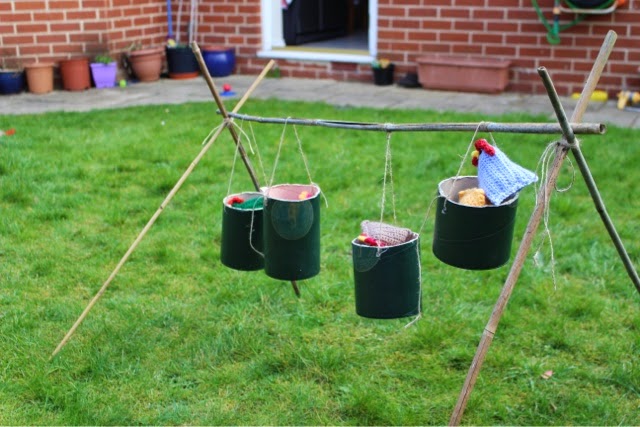 Now. After all that jolliness, get our tissues ready for I have a sad little tale to tell you. Little Man and his friend were out on their bikes yesterday and found this little chap at the roadside. They very carfeully carried him home in one of their bike helmets (so proud of them both :) The doorbell rang. "We found a tortoise" they said. "A tortoise?" I said. "Er.....". And so we phoned the vet. And took the tortoise, in a shoebox balanced very carefully on Little Man's lap in the car, to said vet - me, my 3 Little Peeps plus Little Man's friend. Quite an expedition. And so the vet took a look at the tortoise. Which turned out to be a turtle. 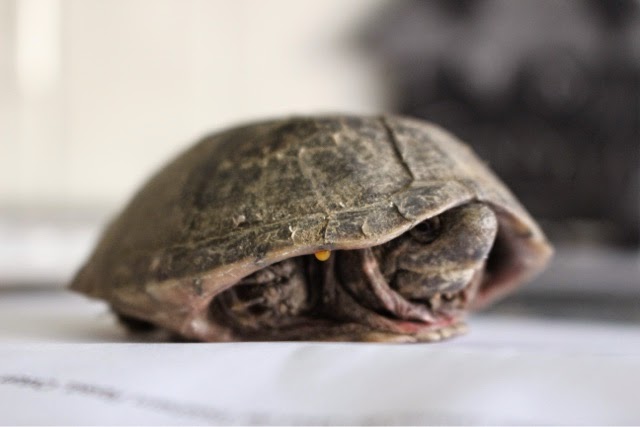 "He's very poorly...." said the vet "... very skinny and dehydrated..." he continued. Turns out he is a type of Asian Box Turtle. Aquatic, not native to the UK, difficult to look after, and of high monetry value. Often used for breeding, illegally. And really not in great shape at all. The vet said he would monitor it overnight and call us today with an update. In the meantime we called at a few houses to see if anyone had an escapee turtle (how does that even happen) but in reality I was rather hoping we wouldn't find anyone as I have a suspicion that the poor little turtle was, at best, not being looked after properly, and at worst, had been abandoned.
So the vet called this morning, poor little turtle didn't do well overnight, isn't feeding himself so needs tube-feeding which would need an anaesthetic which would add more stress and trauma....... aaaah bless him :( Vet is going to monitor again tonight but between us we agreed it would be best, if there's no improvement overnight, to put him to sleep :( We, hubby and I, considered giving poor little turtle a home, but we don't think we'd be able to care for him properly. Poor little turtle :(

Phew. Sorry. Bit of a sad ending there. I am supremely proud of my boy and his friend so being so caring, they were so worried and so gentle with poor little turtle.

And onto brighter things. Little Miss helped me to pick the Blog Birthday Giveaway Winners :) 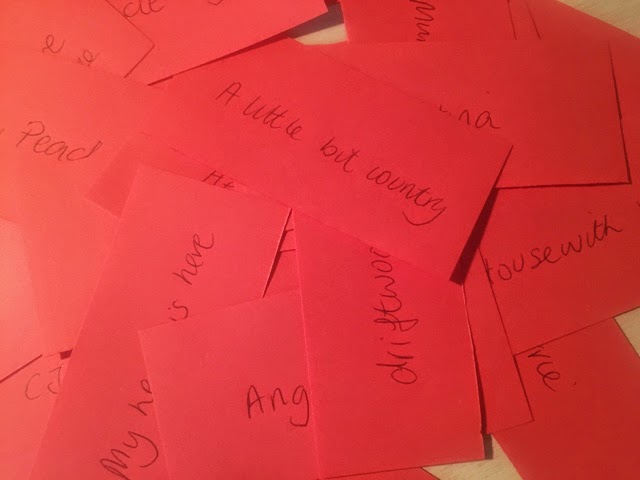 We wrote out the names, folded them up and plonked them in my button tin. If you're wondering where the buttons are, they are now in jars and sorted according to colour (wee bit OCD ??). 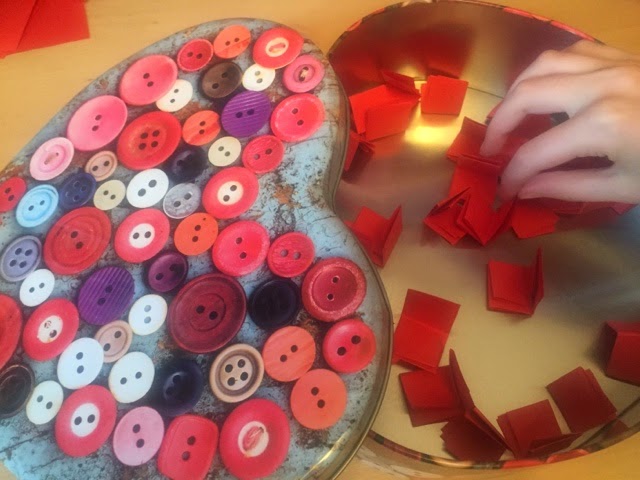 And the lucky winners are ..... Niki Murray - hurray!!! And HouseWithHearts - yippee!!!
I'll be in touch tomorrow ladies to get your contact details :) And then you can await an exciting parcel in the post :) 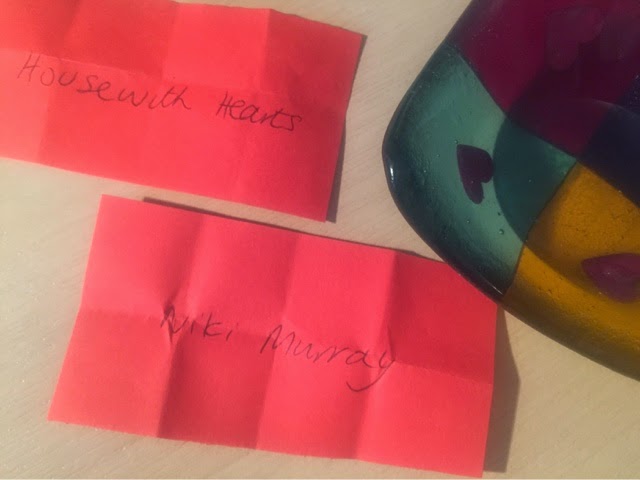 Enjoy the rest of your Easter hols people - mwah!

Posted by Jill at emeraldcottage at 21:56