Are you a hoarder ? I am. I try to deny it, and I tell Mr EC off for keeping random boxes of god-knows-what - mostly cables it seems (what is it with men and cables ???) but in all honesty I'm as bad. Its just my hoard is prettier and more fluffy. Ball of wool anyone ?

One of the things I keep is old cards, or to be more precise the fronts of, or pictures from, old cards. I've been doing it for years, and very, very occasionally I even put them to good use by making some handmade cards. Meanwhile the months go by, I forget to buy cards for birthdays and the pile of card making stuff sits untouched and my friends feel unloved.

So I've been meaning to sit down and make a load of cards for ages, and today seemed like a good time to do it as my other job for today was laundry. About 8 loads of it. Where does it all come from ? Are there some children living here that I haven't noticed yet ?? In between putting the machine on, hanging stuff out, bringing stuff in, rearranging the washing line for optimal clothes peg usage, I put together a few really easy cards. I know a lot of card making peeps make lovely fancy cards: my imagination/design skills are not that great so I like to keep it simple. Plus I can make them faster that way which is great if you're looking for instant-gratification. 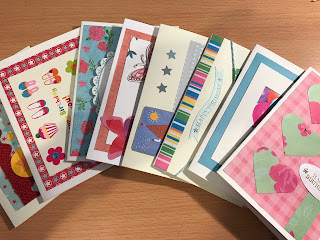 So I thought I'd show you the cards I made today, to demonstrate how easy it is to make some quite nice cards (or maybe they are hideous, I find it really hard to tell when I've made them lol) with some really basic supplies, and not much skill!

The basics that you need are:

- scissors, pencil and ruler, and of course card blanks. Or just plain card if you are feeling confident enough to be able to fold it exactly in half.

- decorative card and/or paper. I got a lot of mine free with magazines, or have leftover stuff from the days of crafting with the children .... 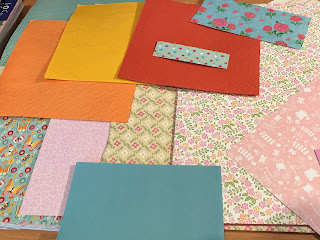 - card toppers - most of mine come from bits and pieces of old cards. I have a few packs of things that are labelled "card toppers" but I've no idea where they came from! Probably given to me by someone clearing out their stash. I seem to be a magnet for that sort of thing (not that I'm complaining). 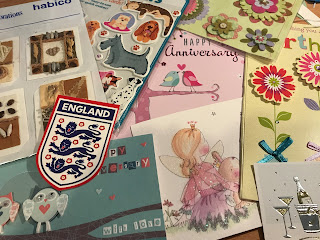 - this picture below is a really good example of reusing an old card. The original card had 16 cupcakes on it, I was able to chop it in 3 to give me 3 little rows of cupcakes each with a "happy birthday" sentiment, (one row of cakes ended up having to be trimmed to close to the edge) and I can use each little row for a new card. 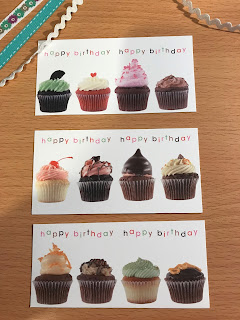 - sentiments - obviously these can be hand-written or stamped, but I found this pack of 100 little sentiments in the poundshop - yes, 100 for £1. Bargain! 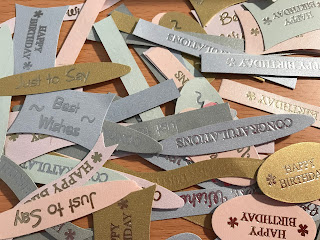 - bits of ribbon, trim, twine are all useful for little touches 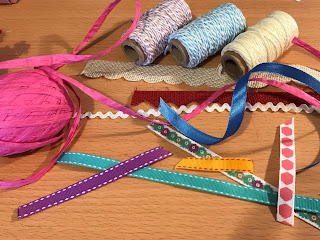 - shaped hole punches are handy, and glue obviously. But the one non-essential item that I consider to actually be essential is a guillotine. Mr EC bought ours years ago, before we got married so its a good 17 years old. We've used it loads, for making our wedding invitations, kids party invitations, cutting up laminated things, and now of course card making. You could just use scissors or even a ruler and craft knife, but if you're anything like me, manually chopped up stuff will look like a pre-schooler has made it. So personally I'd recommend splashing out on a guillotine, they can be really cheap - this one on amazon is less than £8. 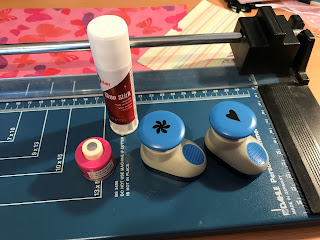 - I also have a Sizzix Big Shot manual die-cutting machine. I mostly use it for hearts, circles, flowers and butterflies, but you really can make lovely cards without it. Mine was a birthday present from Mr EC, and whilst its not essential, it is fun and I love it! 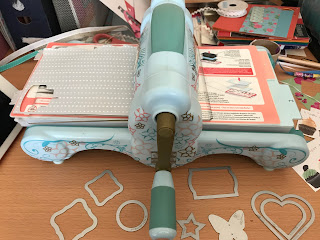 So that's the supplies covered! Here are the cards I made today and a bit of blurb about each of them. Oh and also all the sticking was done with a cheapy gluestick. 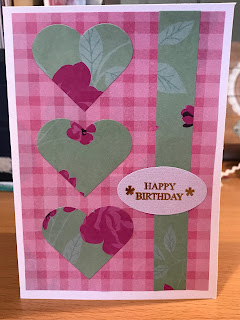 Here I used pink checkered background paper, with 3 die cut hearts. I wanted to fit 6 hearts on but even my smallest heart die they were too big to all fit. 3 on their own looked a bit lost somehow until I added the vertical striped to match. I also thought of putting a smaller heart on top of the ones shown, but it was starting to look a bit fussy, so I left it as it was. Then I added the "Happy Birthday" sentiment. 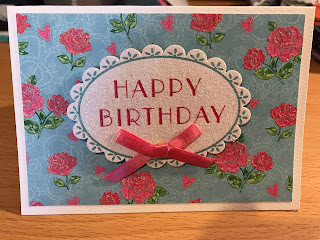 I used this flowery card front from an old birthday card which already had this sentiment on it. So I just guillotined it down to size and stuck it on the card blank. The sentiment is stuck on with foam dots so it has a pleasing 3D effect. 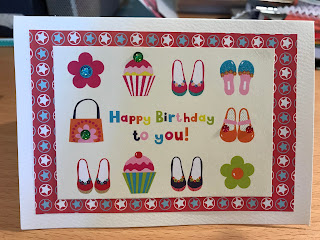 Next is quite a fun girly little card. The shoes etc and the "Happy Birthday" sentiment came from an old card. I guillotined it to size, and also guillotined some coordinating background paper. It was quite hard to decide which colour to use for the background, the main picture has so many colours in it, you'd think anything would match, but nearly everything looked horrible! I think/hope this one works. Though this is a prime example of where I can't decide if it actually just looks a bit rubbish! 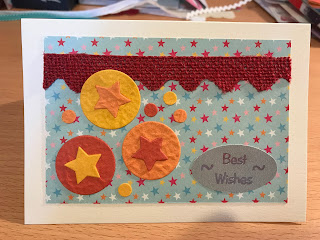 Ooooh I do really like this one. I have a few papercraft magazine and took inspiration for one of those for this card. Its really very simple but I quite like the layered effect. I started off with the background paper of pale blue with lots of little cards. I decided to pick out the colours of the stars in the decorations. The red trim is some hessian bordering stuff that I found at the poundshop. I used my die-cutter to cut circles and stars to layer over the background and hessian. The paper for the stars is from a pad of paper that claims to be handmade. I'm not sure how true that is, but its that sort of paper that has a lumpy bumpy texture. This would be a  nice one for a chap I think, but could easily be copied in a more girly style. 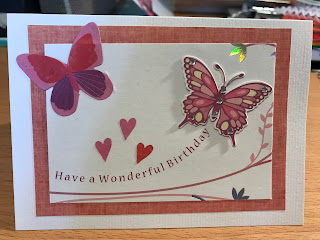 I started off with the piece of an old card that has the sentiment on it - and it also had some swirls and a lovely 3D butterfly. I managed to find a piece of very lightly patterned paper that matched the pinky-red of the main card, and then I die cut another butterfly, and used a heart stamp for some mini hearts. I think this would have looked just as nice without the second butterfly, and maybe with a few more hearts. 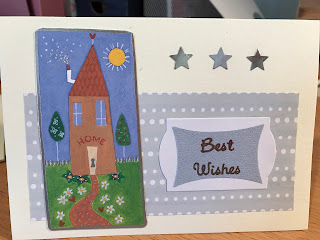 Again I started off with the main image which came from a new home card. We last moved home 15 years ago so that's how long I've kept this one! Bonkers!! Anyway I cut it out free-hand as it had a sort of wonky look to it. Then layered it over some grey and white patterned paper, and also layered on a white die-cut plaque shape, and then a "Best Wishes" sentiment. You could easily just cut or guillotine a rectangle instead of the plaque shape. 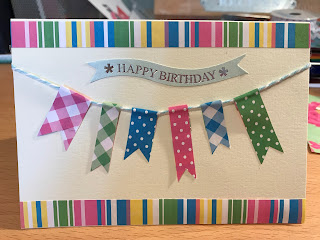 This was another magazine-inspired card, and is by far the most fiddly of the cards I've made today. I found some stripey paper which had came with some sheets in checks and spots of matching colours.
I guillotined down the stripey paper to make the edge pieces, then using guillotine, scissors, and glue, I made some little flags and looped the over the twine. The twine is fixed at the back with sellotape and then I kept the flags in place by gluing down a couple of them. Then stuck a little sentiment on top. 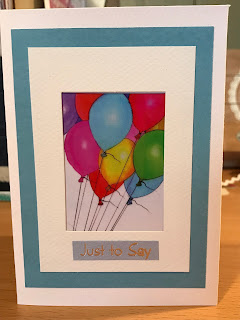 Another really really simple card. I guillotined down some blue card as the background. The balloon decoration again came from a card that I received absolutely years ago. It's balloons painted on a piece of acetate and the original card had an aperture so you saw through the balloon window but I decided just to put some white card behind it. This meant when I layered it over the plain blue card, the background of the balloons stayed white not blue. Does that make sense ??! And of course a little sentiment added at the bottom.

I've currently not got any plans for tomorrow - no, not even any laundry - so I'm planning to make a load more cards while my stuff is all already set out! I might bore you with some more pictures too. And well done if you read this far!!!

ps no idea why my images look so grainy today but I have to go and start dinner now so they will have to do!!! Sorry!

Posted by Jill at emeraldcottage at 17:53