Hello dear friends and readers, thanks for popping by, I hope you're having a good week :) 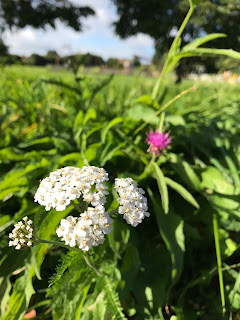 My Little People have been back at school almost a week now, and we are settling back into the familiar, and mostly comfortable, routine that comes with school life. I say mostly comfortable because I will never find getting up at 6.30am to be comfortable, but it is lovely to get the house back to some semblance of normality. 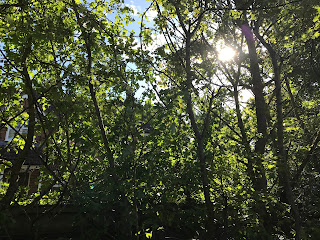 By the end of our 6 week summer holidays the house usually resembles a slum with no room (nor the garden) escaping the ravages of 3 mess-makers. Honestly, how do they make SUCH a mess EVERYWHERE ???
Anyway, they're back to school now so I can get a bit of order back, and the fridge isn't quite so empty. Of course being back at school bring its own delights and challenges - last night we had to attend a GCSE meeting for Mr14, and a curriculum meeting for Little Tomboy. The meetings were in different schools, at the same time. Great. We decided to not attend Little Tomboy's, but to both go to the GCSE meeting. Which turned out to be somewhat of a waste of time anyway, the message simply being - This is an important time. They need to be in school. Support them with their learning at home. Nothing earth-shattering or particularly useful.

This morning before 7am I had Little Tomboy thrusting at me a pile of forms which needed handing in TODAY, Little Miss dictating to me a shopping list for food tech tomorrow, Mr14 shouting that his lunch money account was empty so could I top it up, and oh can we go to Hobbycraft after school (and after the hairdressers as they are getting haircuts today) to get a birthday present for a friend for tomorrow. Seriously, when will they learn asking me this stuff before my first coffee is never going to elicit a cheerful reply.  Luckily Little Miss' kickboxing isn't back til next Thursday and it's just hairdressers and Hobbycraft before dinner. Term-time is fairly manic, and having three at three different schools is bit of a juggling act to say the least. 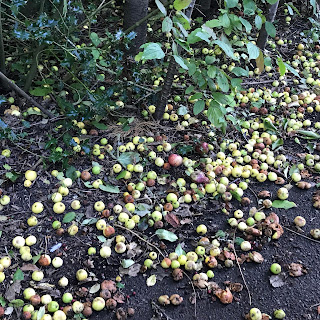 With the start of term also comes the onset of autumn. The mornings are getting darker, the sun is dipping a little lower and the air is that little bit cooler. I have very mixed feelings about this. I love the turning of the leaves, and the windfalls, and gorgeous colours that herald autumn, but I don't like the darker mornings, and I really, really don't like the fact that winter is around the corner. I definitely suffer from seasonal blues, and have come to not quite dread winter, but I certainly don't look forward to it. I do try though to relish the opportunity to sit inside all cosied up with my crochet, and, having a few tricks up my sleeve this year for dealing with the winter blues, I'm hoping to stave it off a little at least. 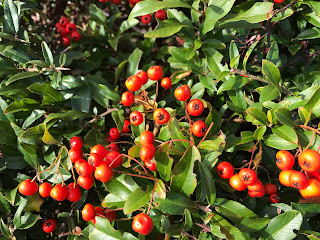 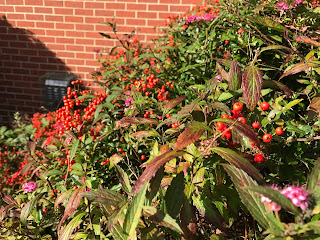 We've also had Little Tomboy's birthday this week, she turned 10. 10!! Double figures! How did that happen ?! Her presents included a stunt scooter, a massive football goal and goalie gloves: she is goalie for her football team and wants to be able to practise more at home with Daddy. 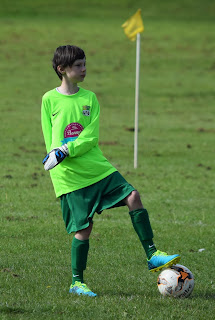 She had a trampolining party with a load of friends. Best party ever, 2 hours of them jumping while I sat in the cafe and crocheted. We worked out we have now done 36 kids' birthday parties. I'm rather a dab hand I think. We've done trampolining, laser quest, miniature railway, cinema, craft, dancing, football, making-a-bear, and traditional party games. I know they don't much care for the food bit, plus it causes extra stress because inevitably they all end up running round like maniacs threatening to crack a head off the corner of the table. So, often, we don't even bother with food, and for this party they just had time bouncing instead. I know parents hate party bags full of sweets and tat, the children also aren't bothered with the tat, and, I am very sorry parents, but the party is all about the children, so I just do party bags with sweets. No expensive tat. Judge me if you will! 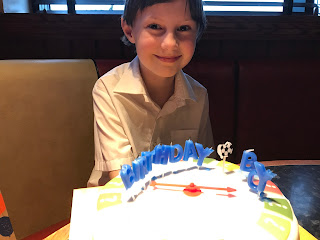 On her actual birthday we went out for birthday tea and I'd brought along a cake for the waitress to bring out for pudding. What I'd failed to notice was that the candles I had bought (which the waitress kindly put on the cake for me) spelt out "Birthday Boy"!! I'd assumed they spelt Happy Birthday. In the shop I'd just seen a pack of blue candles with letters and grabbed them, thinking "those will be perfect". I did think we could have spelt out "Birthday Yob", which, given her behaviour on occasion, would be quite apt. Little Tomboy did see the funny side though, she would definitely rather have had blue birthday boy candles than pink birthday girl ones.

Meanwhile in crochet-land, my purple zazzle scarf is growing nicely. 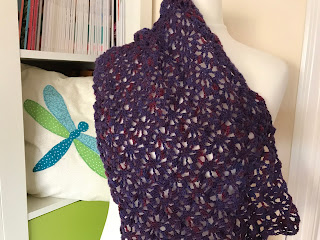 Here is the pattern opened up a bit ... 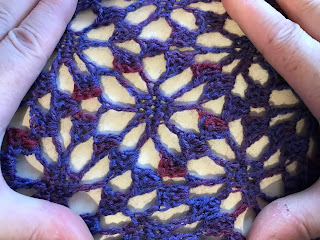 Its going to need a fair bit of blocking, which I might have to do in a couple of stages, as I don't think my blocking boards are big enough. I'm hoping to get it all done by Saturday night as the friend whom its for is having a birthday party then. I wouldn't say its likely that I'll hit the target, but its possible. People may need to go without food tonight and tomorrow though.

I'm planning to come back tomorrow with another "Finish for the Weekend" post, so I look forward to seeing you then,