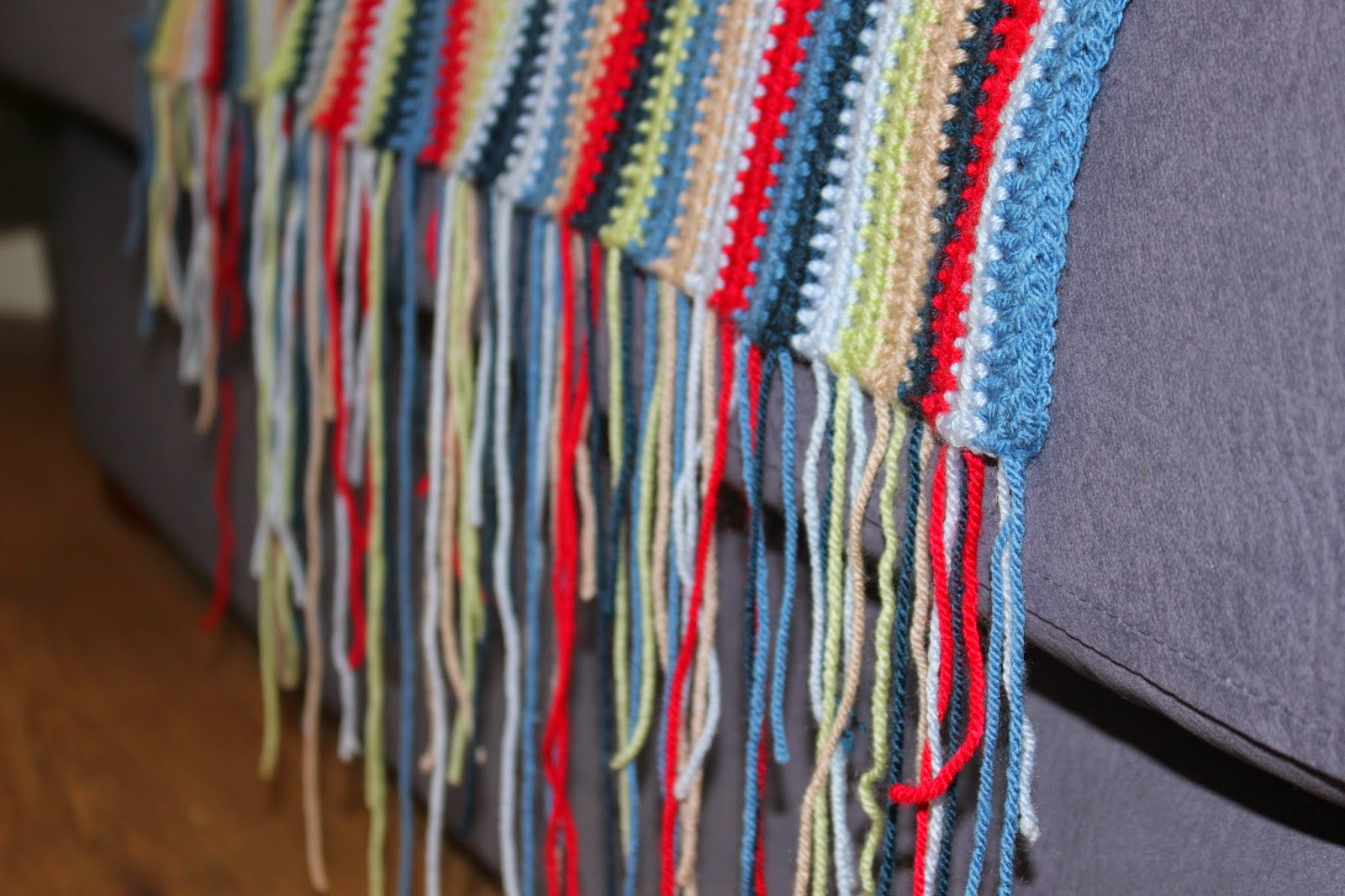 In the last few months I've finished two baby blankets with a square theme - Harrison's giant granny square blanket, and Jasper's dot in a square blanket - and both used the same colour palette of pale blue, oatmeal and white. I had another blanket to make, this time for my cousin's new baby, Jacob, but I wanted to make something different.

Time to sit down with a cuppa, some magazines and the laptop for a flick, a ponder and a browse for inspiration.... 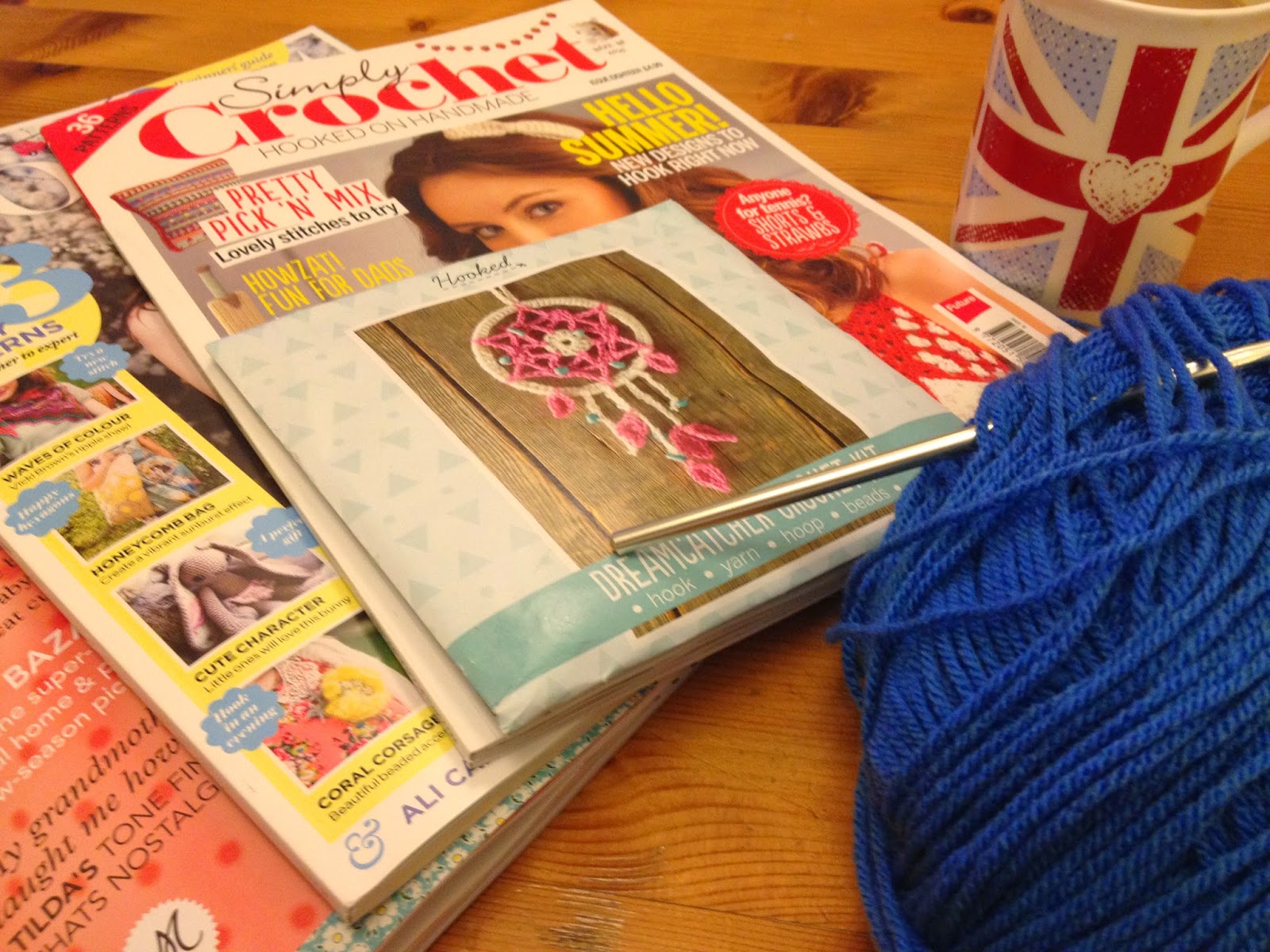 Oh yes! I remembered that I'd seen a stripey blanket by Heather of Little Tin Bird, and felt inspired to make something similar (*** see note at the end of this post :) I quite fancied using the bright blue again that I'd used in Little Miss' Beautiful Bright Bag but it wasn't sitting right with the other colours I wanted. 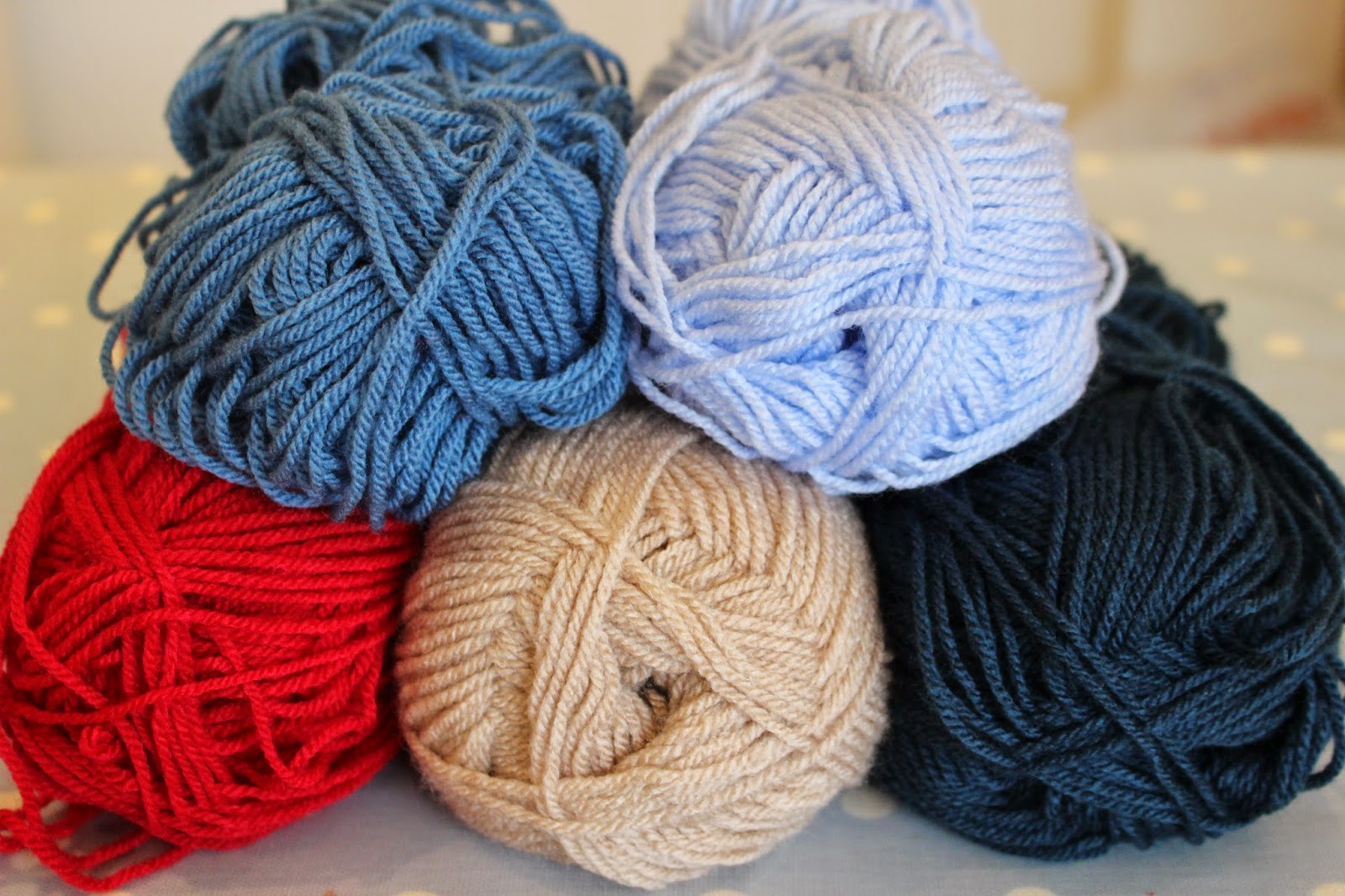 A more varied colour-scheme than my other blankets was in order, with several blues, a red, and beige. That combo looked okay, but something was missing, it needed a bit of a lift. The light green gave just the gentle zing I was looking for. 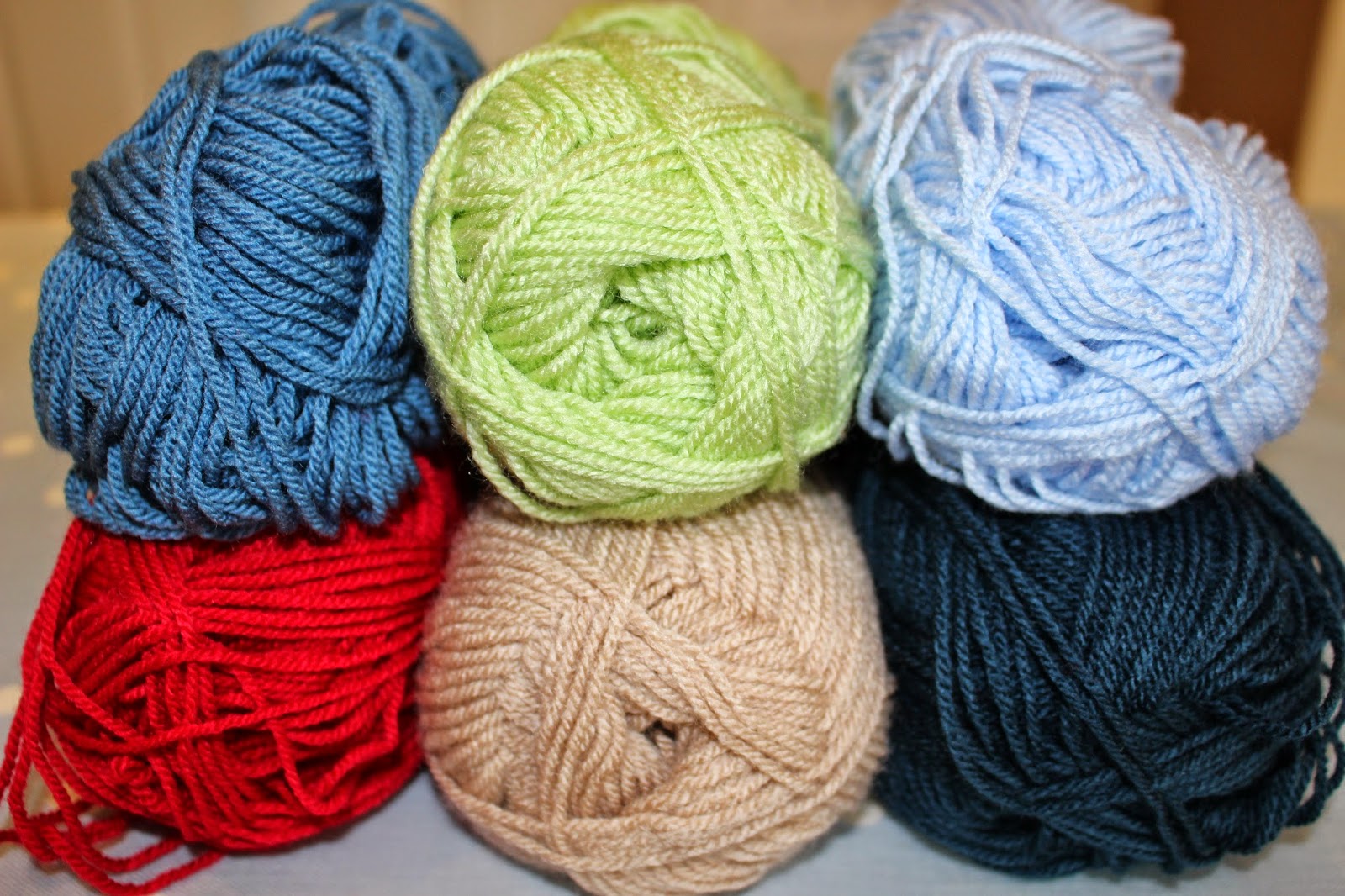 That was it decided then. It would be a simply stripey blanket, with 6 colours, and some kind of border to be decided at the end.
When I make anything worked in rows I always start with a foundation double crochet, instead of simple chains, as its a bit more stretchy and forgiving. I found this foundation double crochet tutorial, it was so hard at first I thought I would never get it, but I persevered and now I absolutely love it. It's definitely worth trying out. 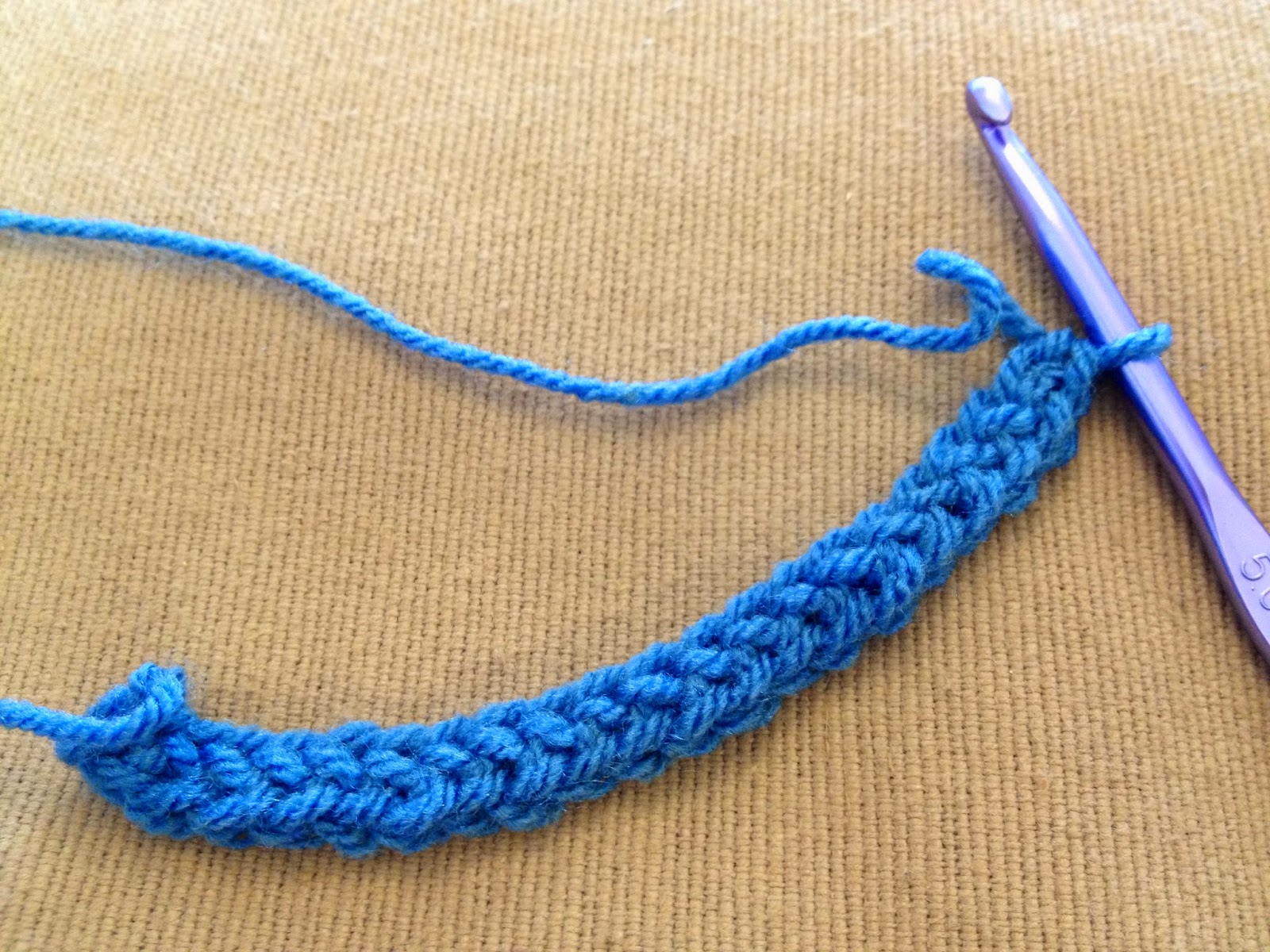 I made my starting row as long as I felt it needed to be. A few rows in, out of curiosity, I counted the stitches - there were 99. Gah! I really wish it had been exactly 100! Somehow that would have pleased me more :)
Anyway. I crocheted my stripes all in half-trebles (UK htr that is), and each stripe was 2 rows, turning the work at the end of each row. This way every stripe had the same texture - one right side then one wrong side (or vice-versa on the other side). 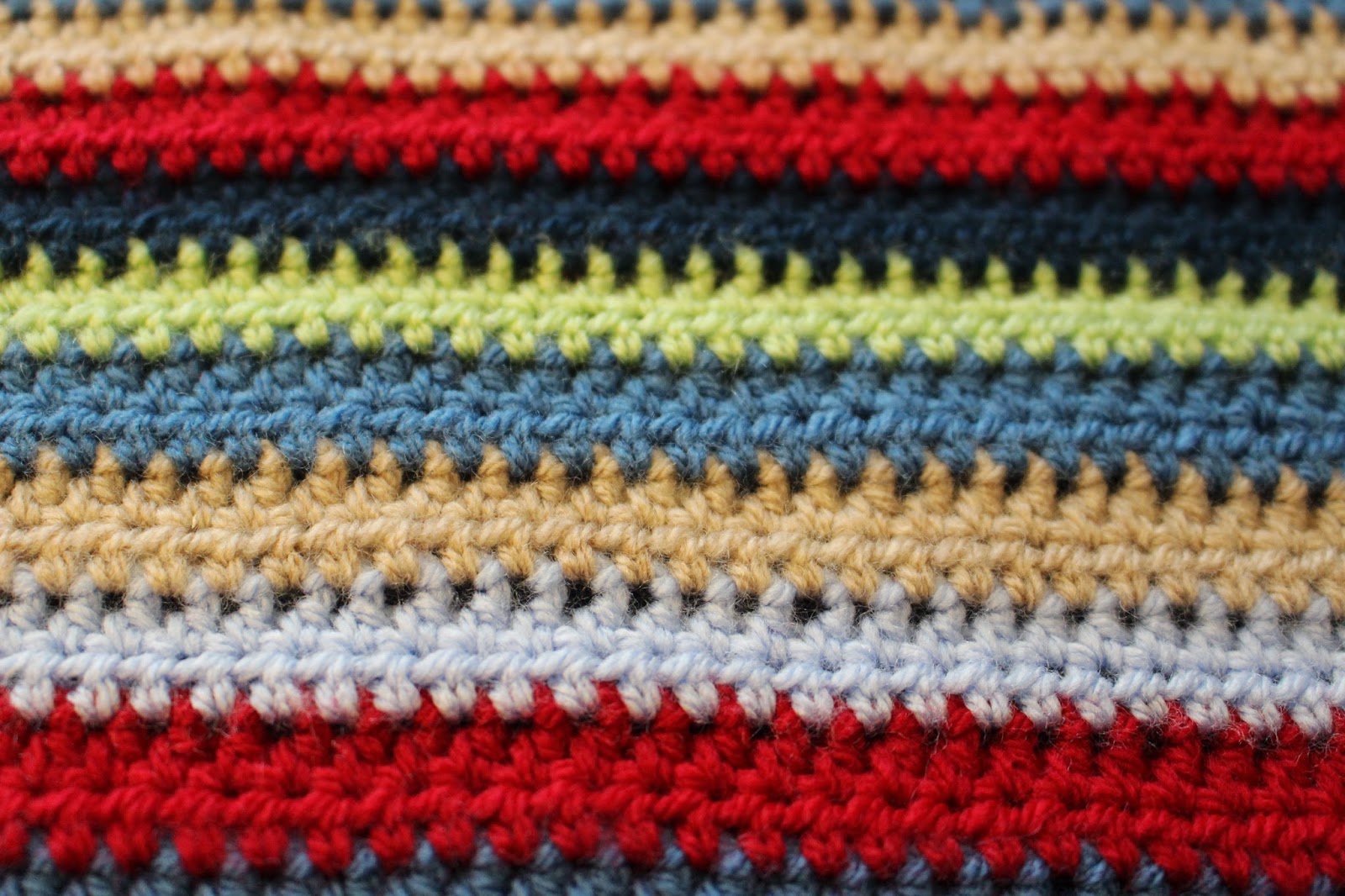 This blanket was really relaxing to work on. Hardly any thought required at all, just half-trebling back and forth, forth and back, a great put-your-feet-up-and-watch-telly project. 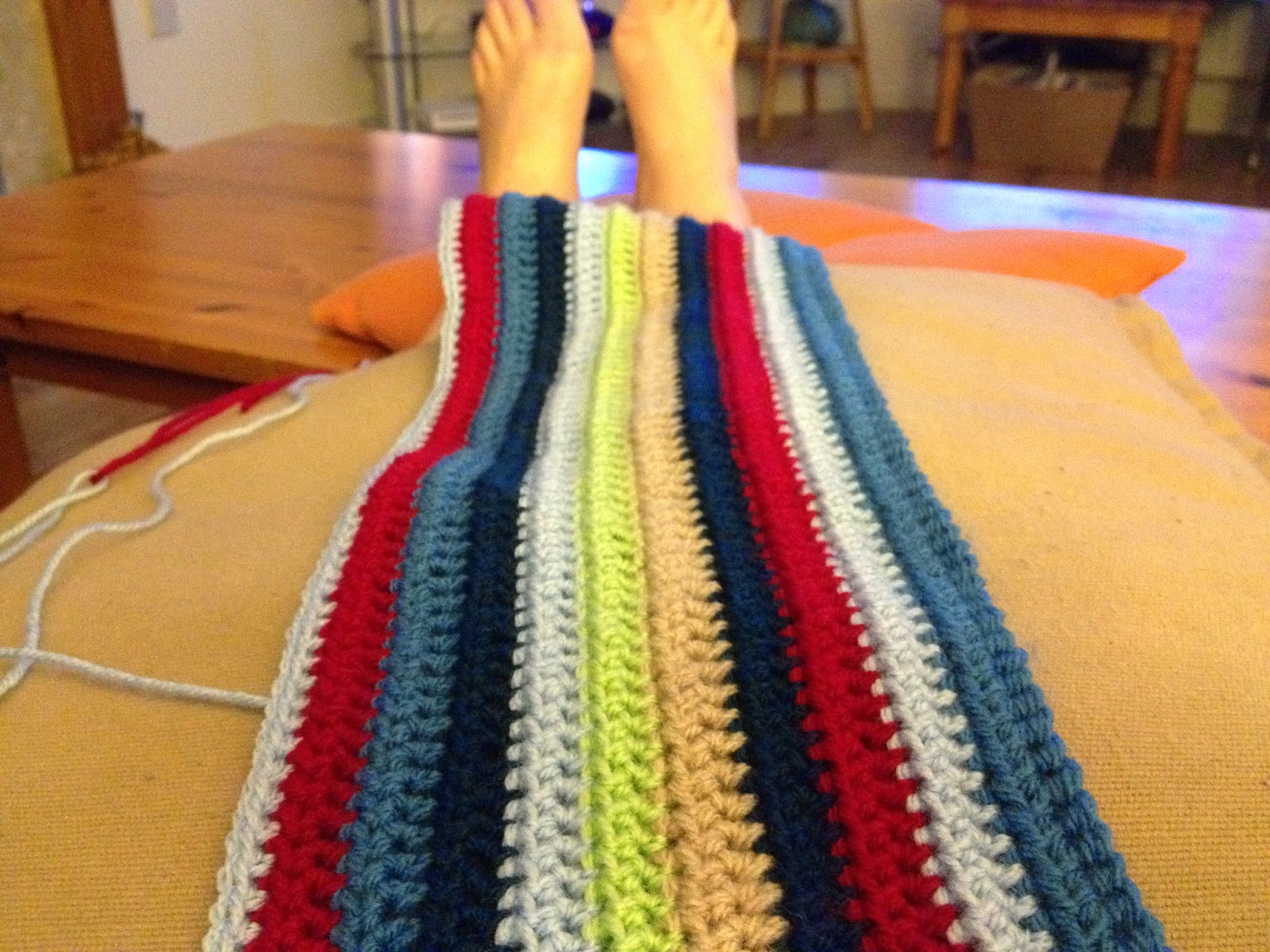 As usual (for me anyway) I wanted the stripes to be random. Arrrgghhh.... because as usual - deciding the random order (does that even make sense?) proved tricky. I wanted a fairly even distribution, and my only "rule" was that I didn't want red next to green. I think I managed to achieve that. Look at all that random stripeyness .... 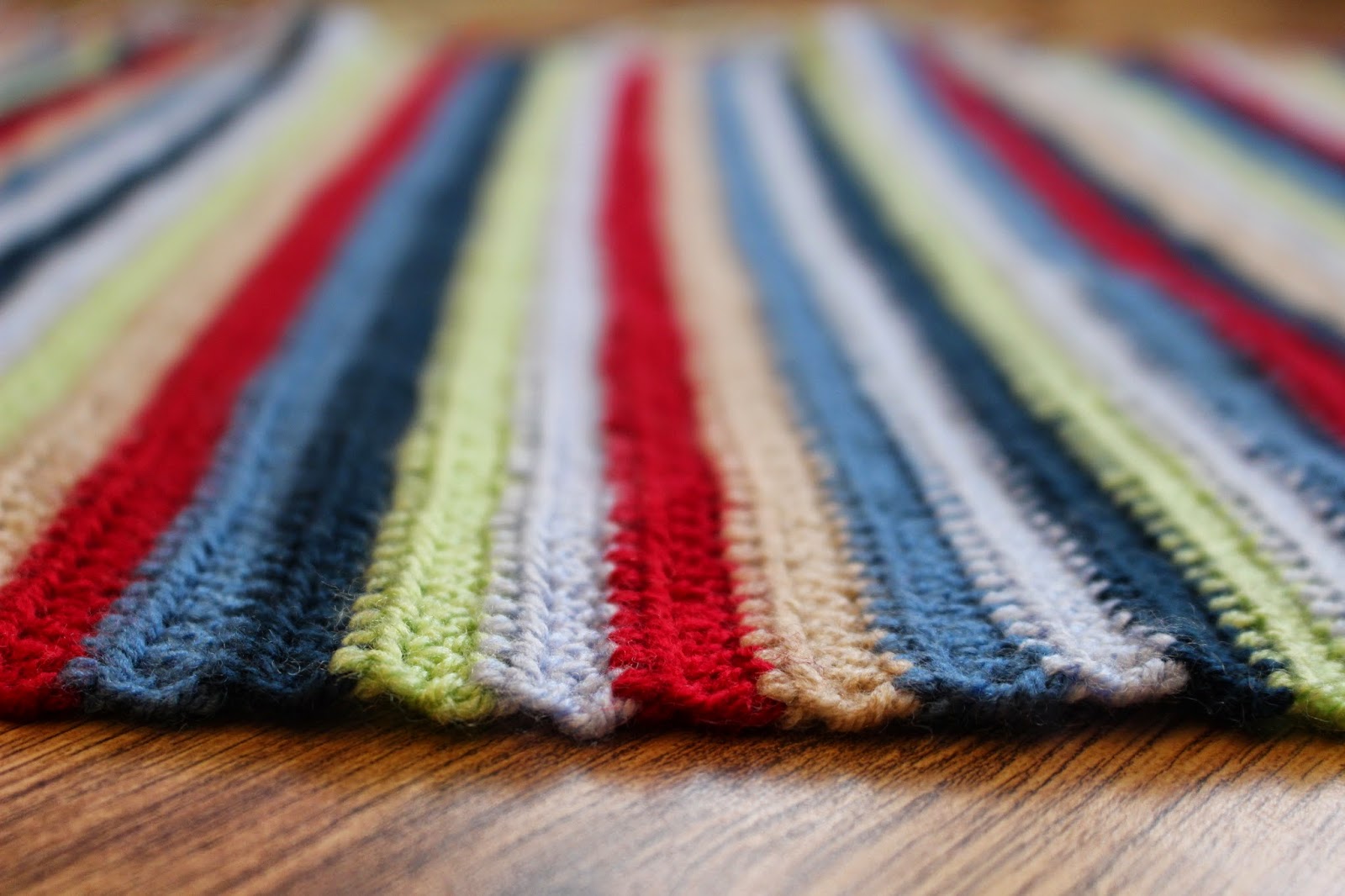 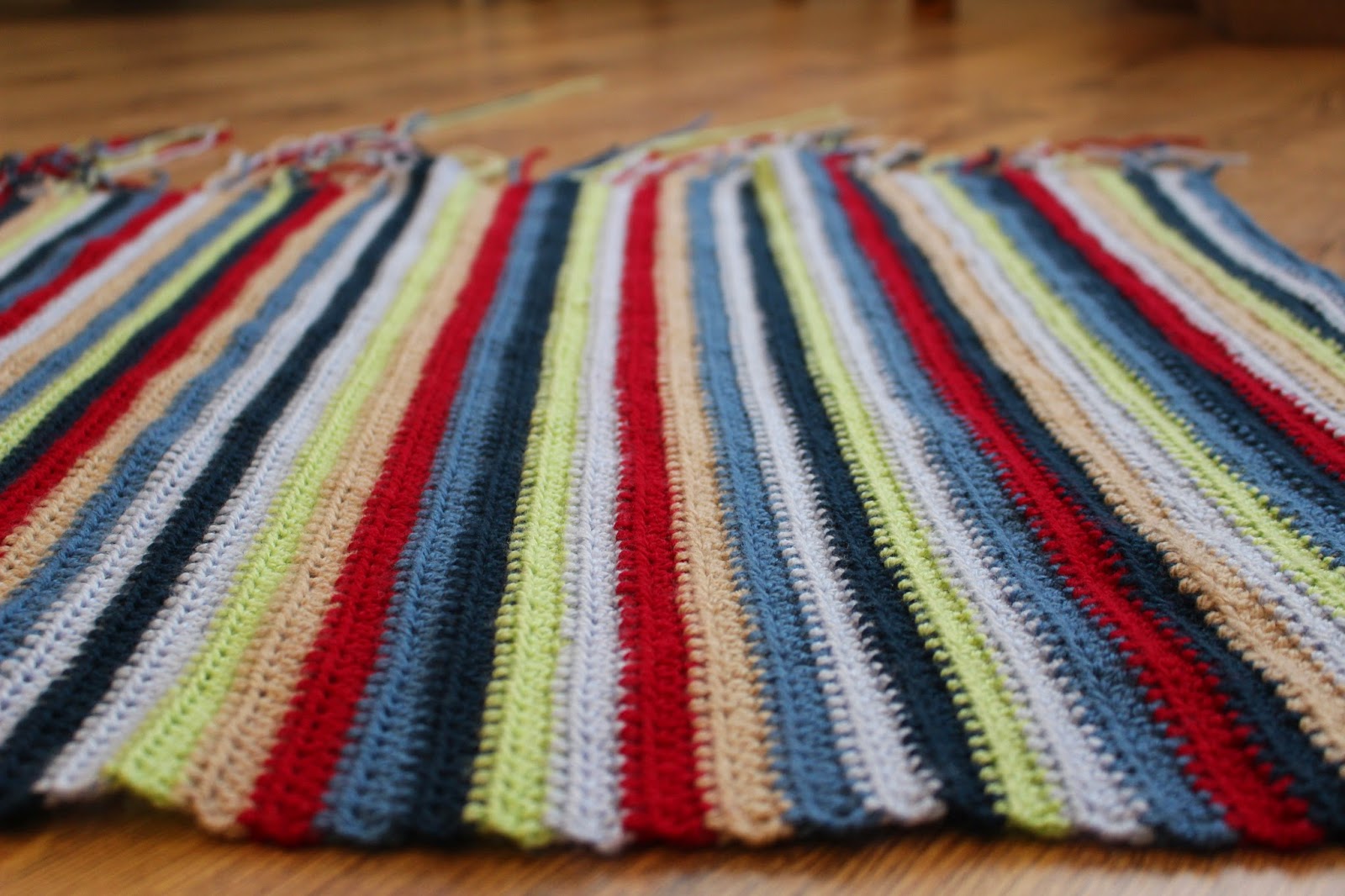 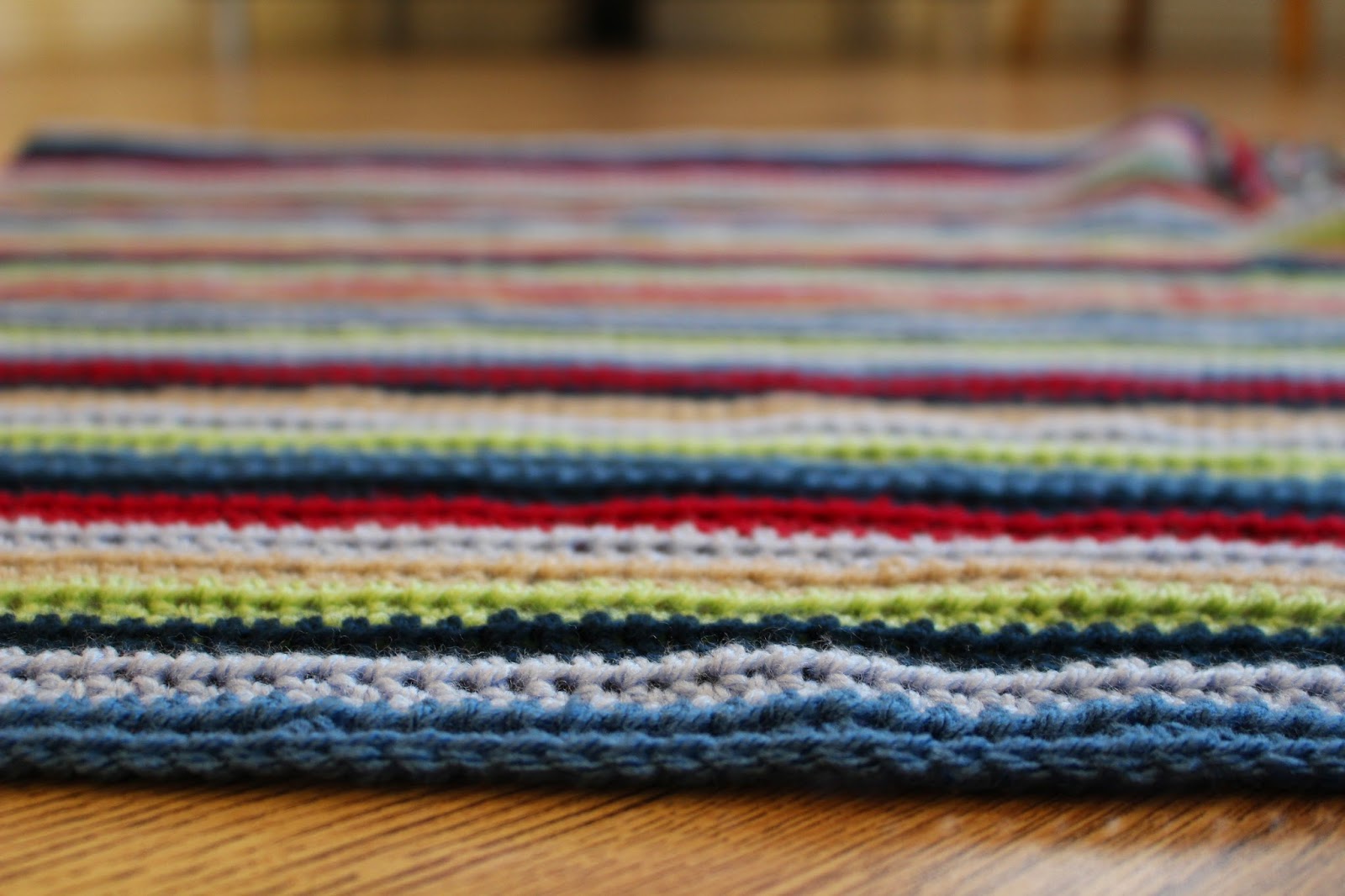 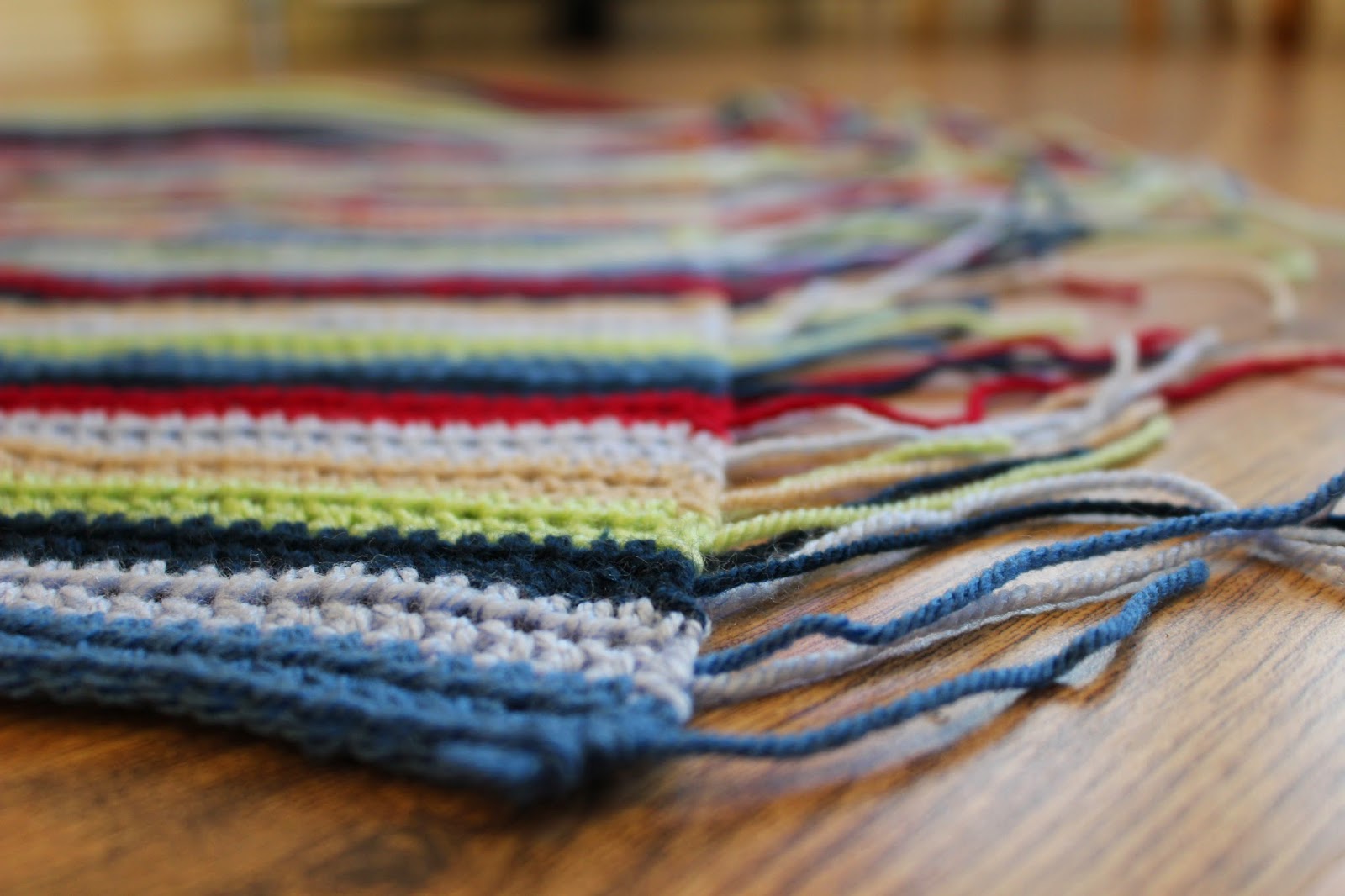 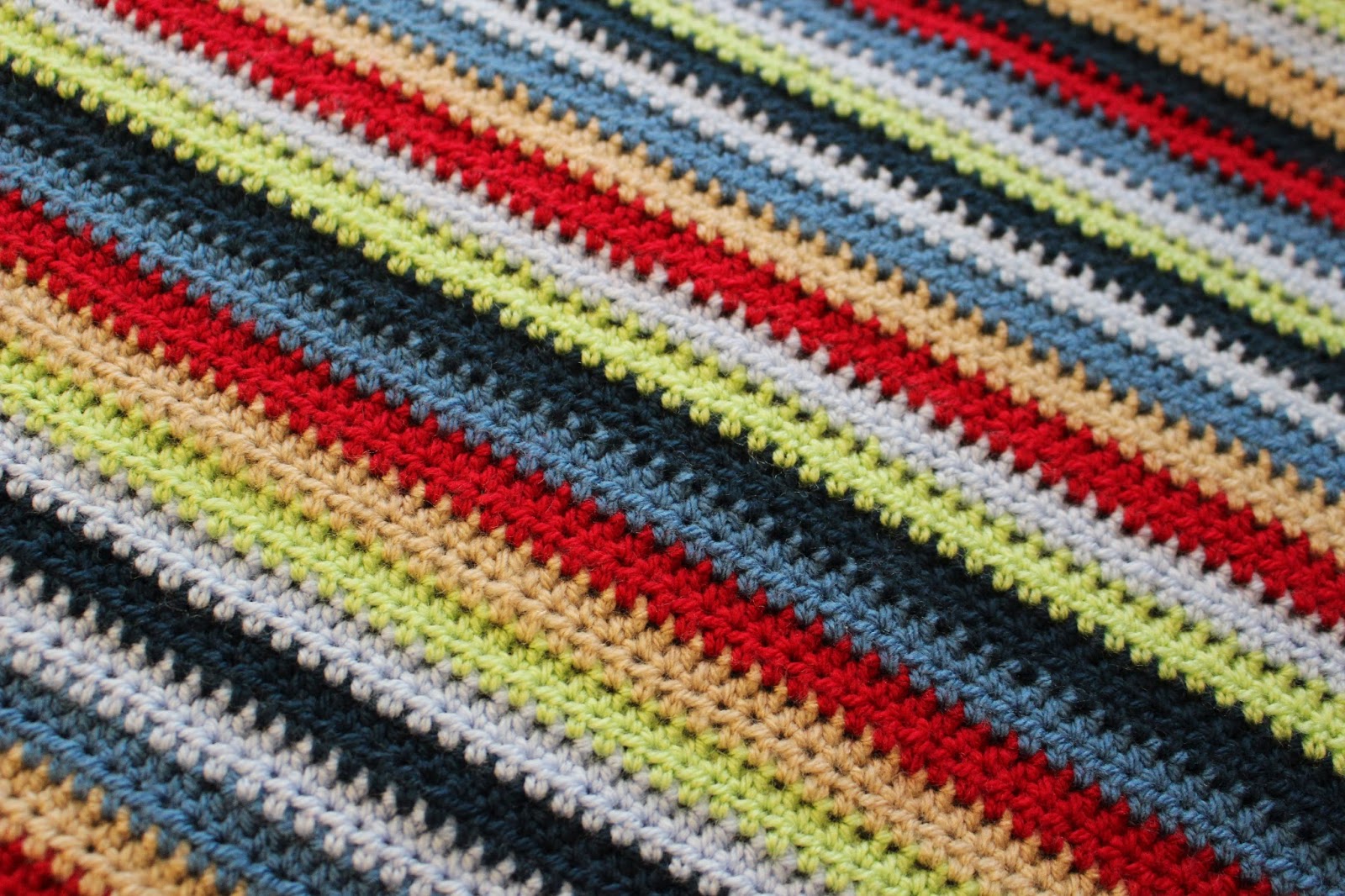 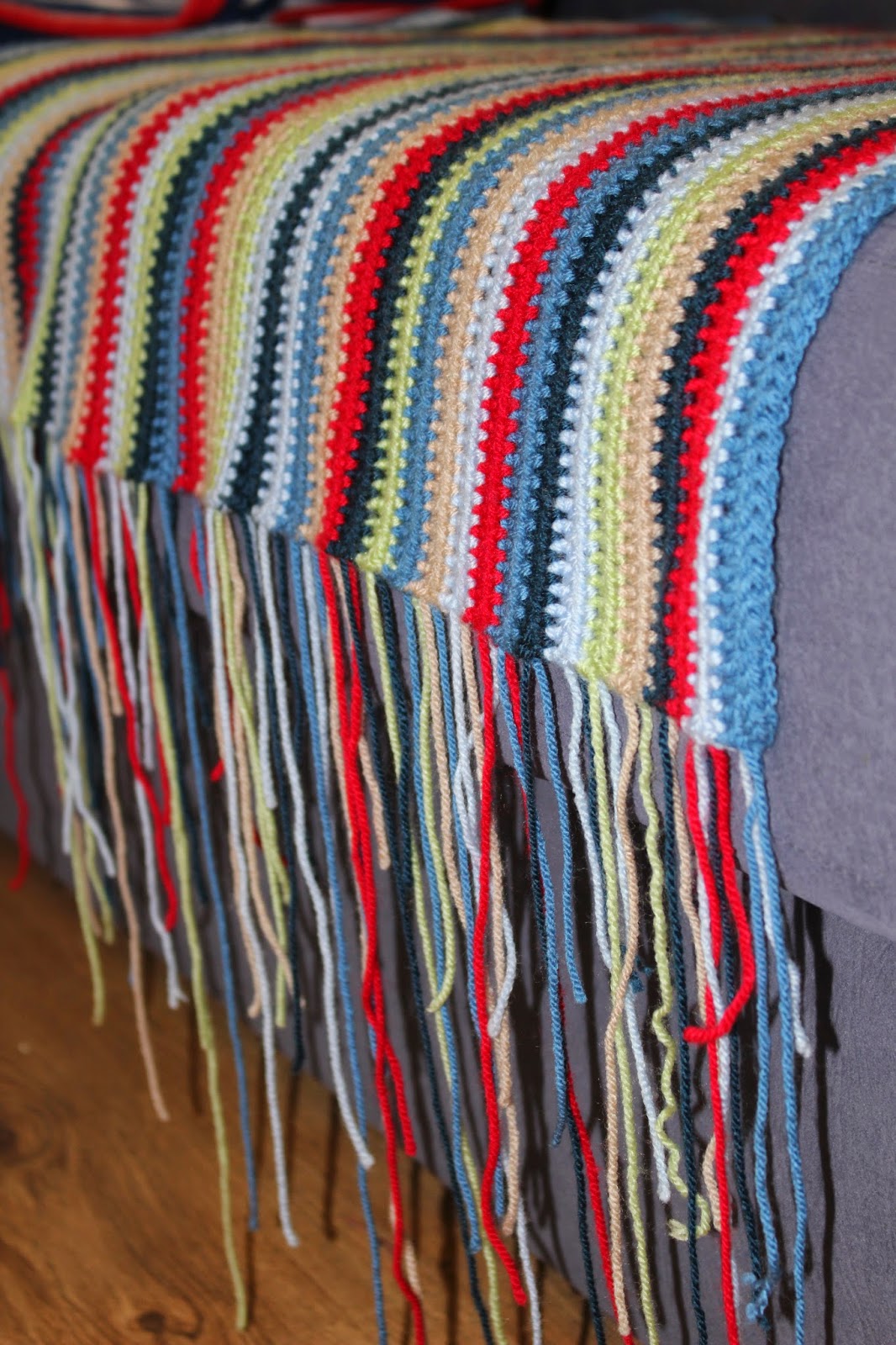 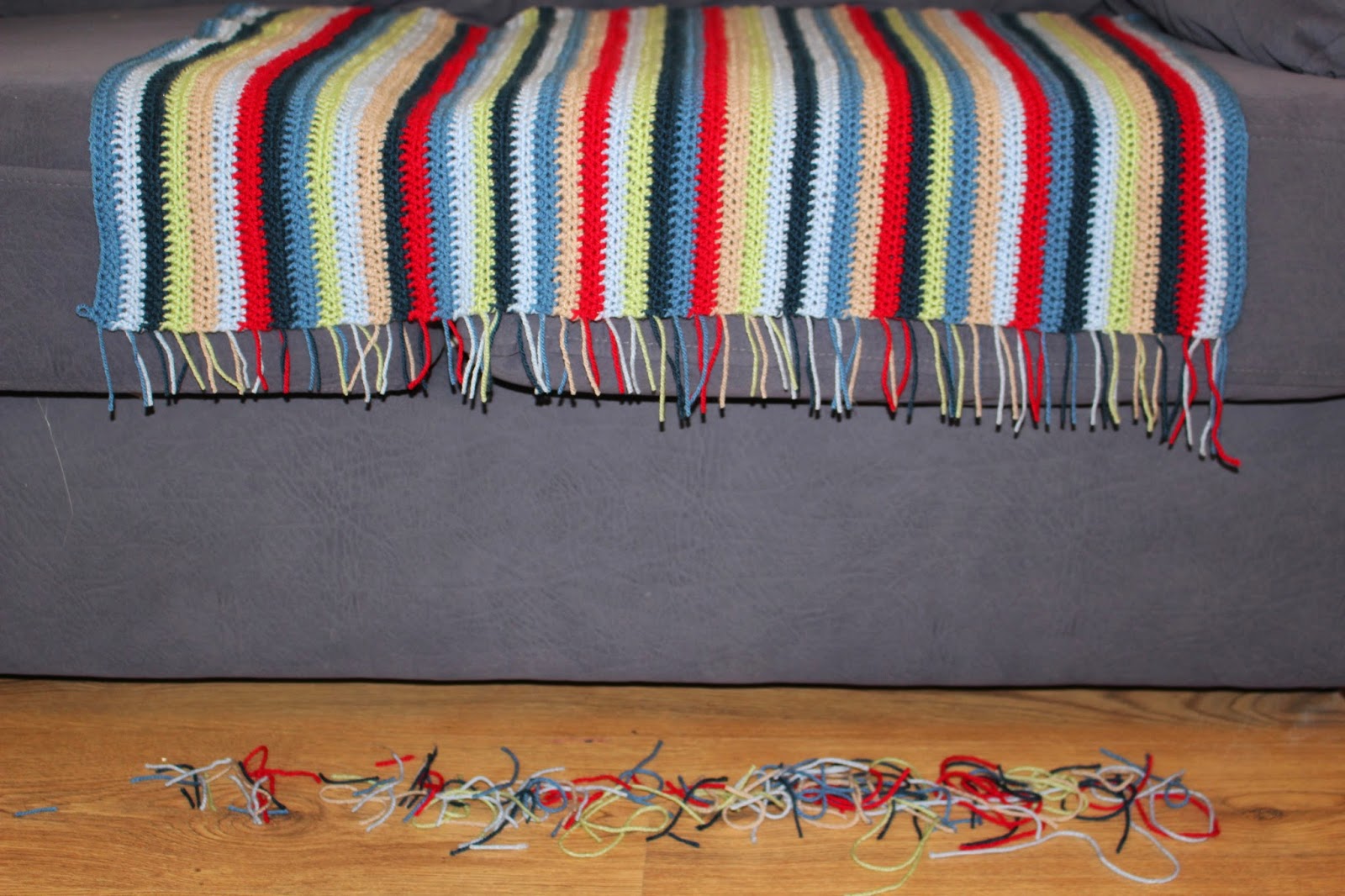 ... and Little Miss gathered up the ends for me. I save them for stuffing things ... 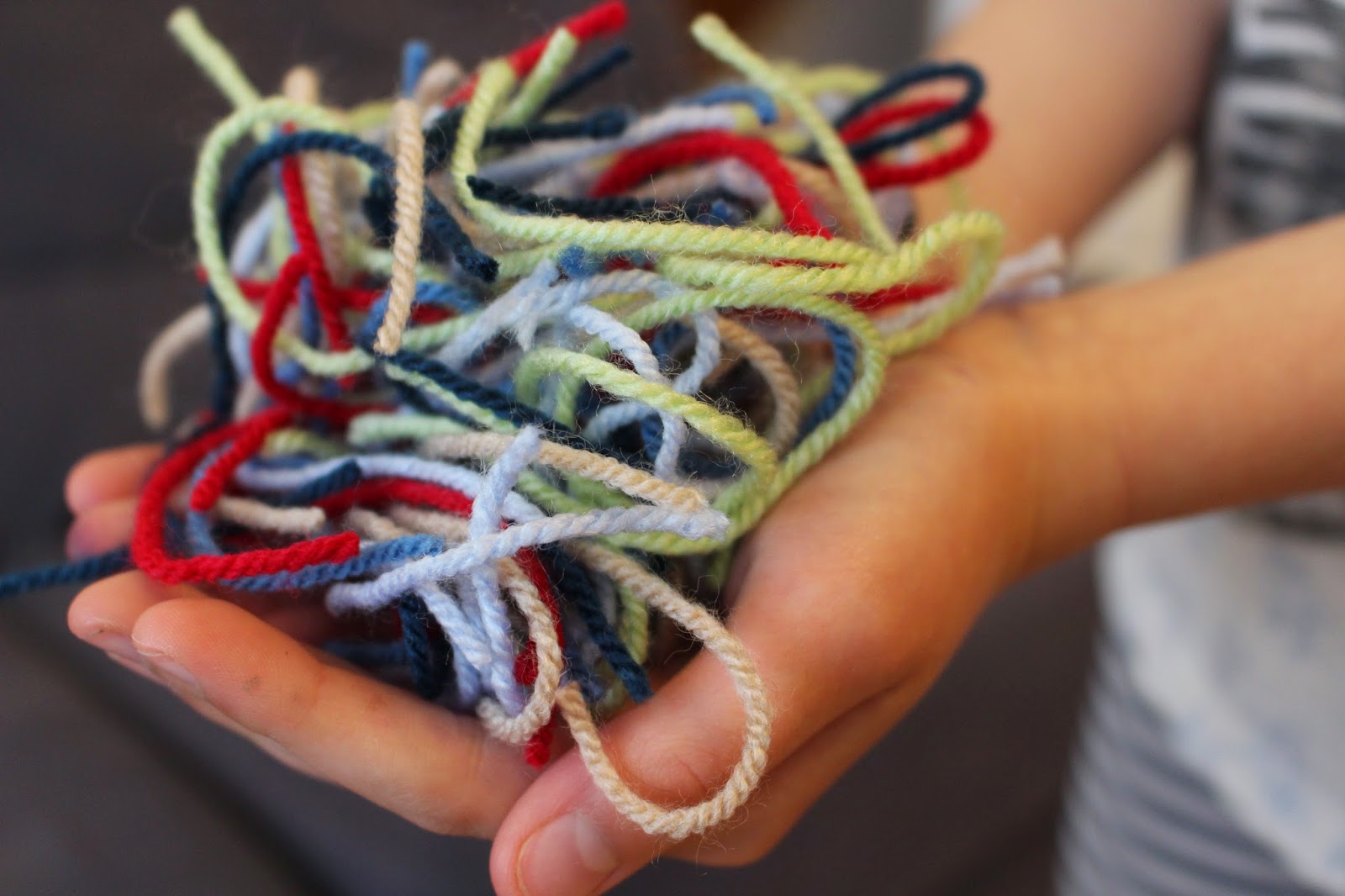 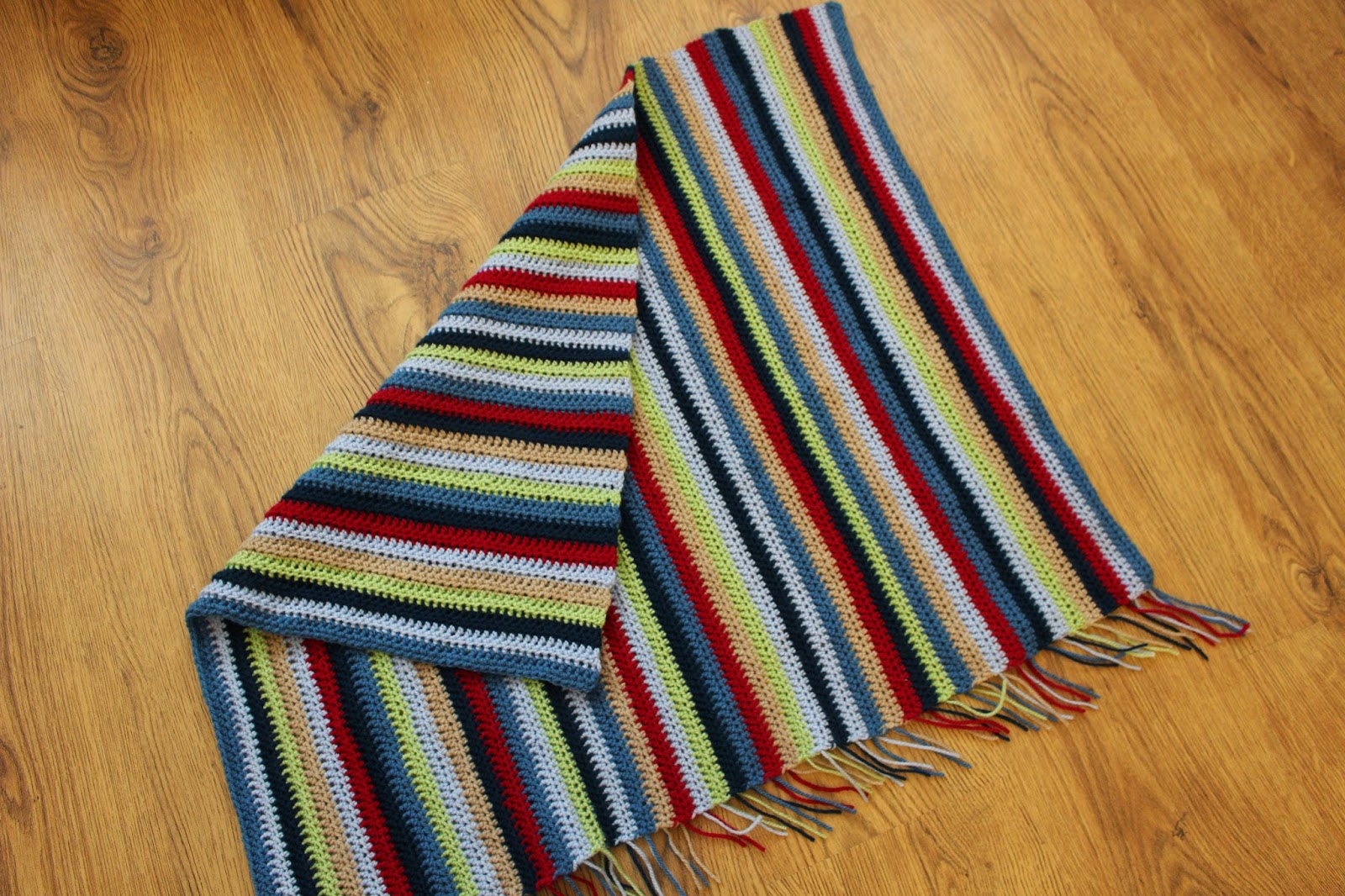 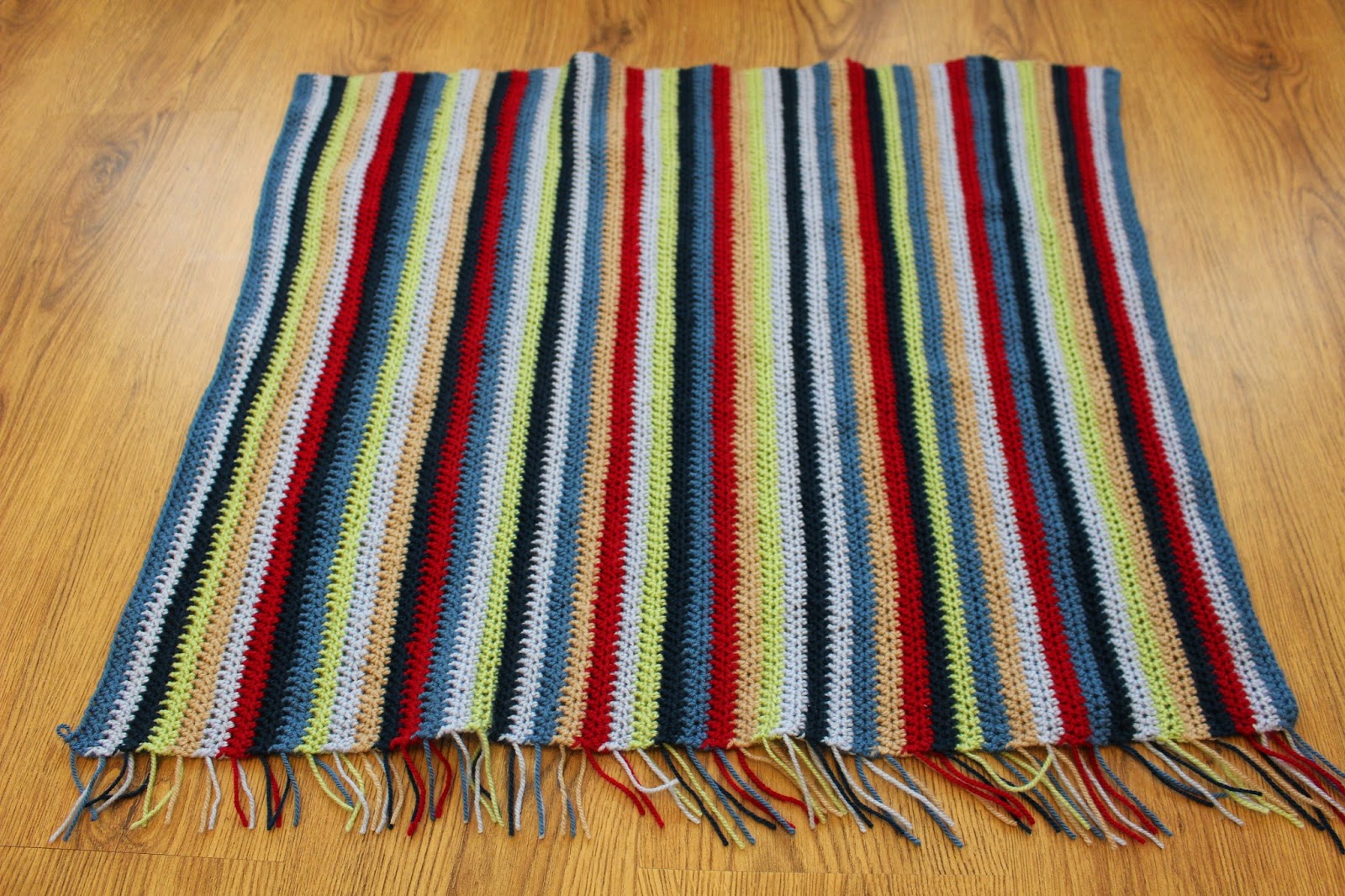 Next thing to do was deal with all the ends and then decide on the border. Hmmm. A row of beige double crochet (UK dc) in every stitch all the way around, working one dc into the side of each of the stitches at the row-ends as well, and 3 dcs into each corner. 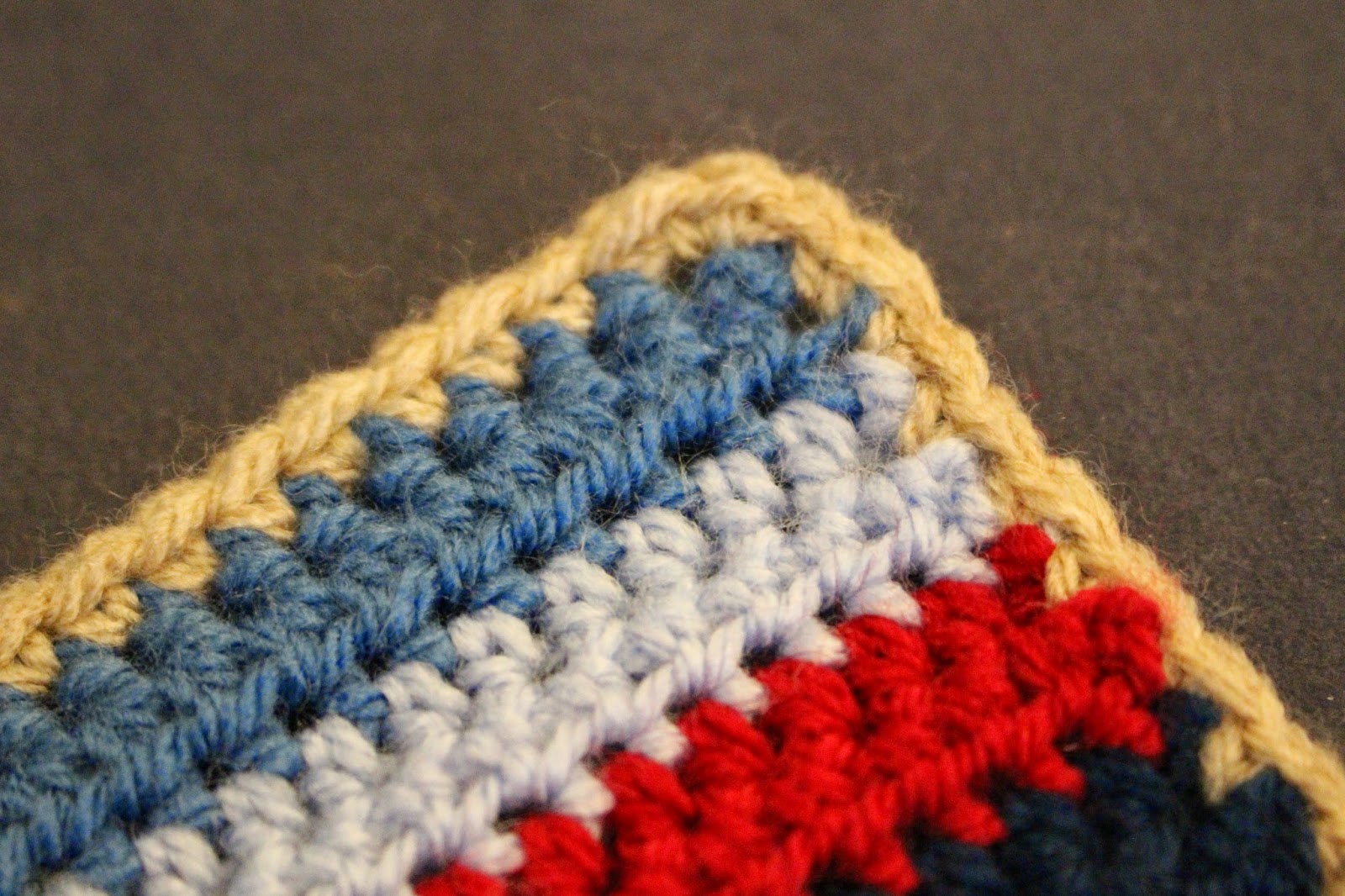 Then another border row of pale blue, again 1 dc in every stitch, and 3 dc in each corner.
Finally I did 2 rows of half-treble (UK htr) all around of kingfishery-smokey-blue, working 1 htr into every dc of the pale blue border row, and 4 htr into the corners. 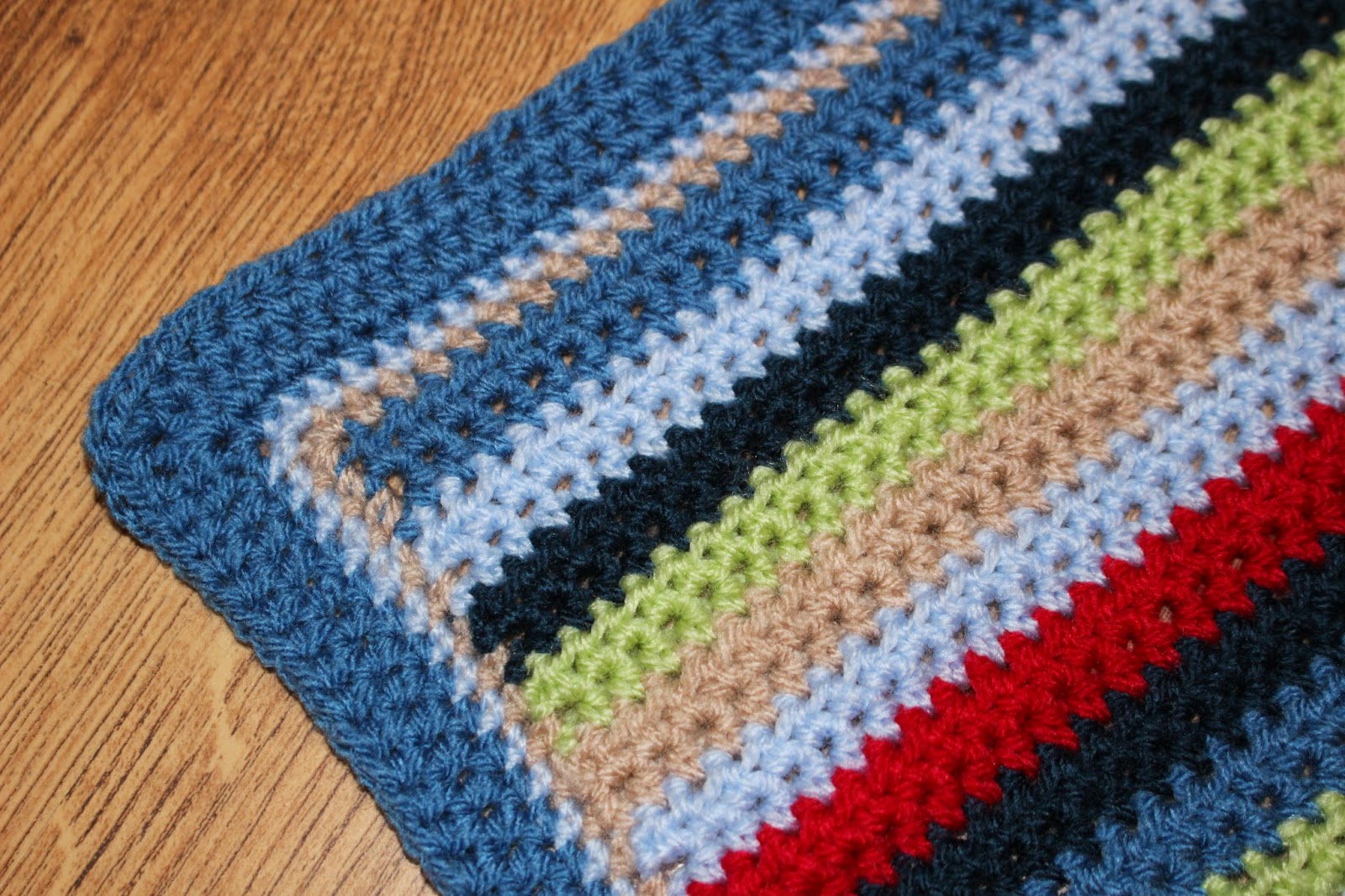 I dithered about adding some kind of picot or scallop edging as well, but in the ended decided to stop here. It was the simplicity of the stripes that I liked, so it seemed fitting to have a simple border too.

And here is the blanket in all its simply stripey glory :) 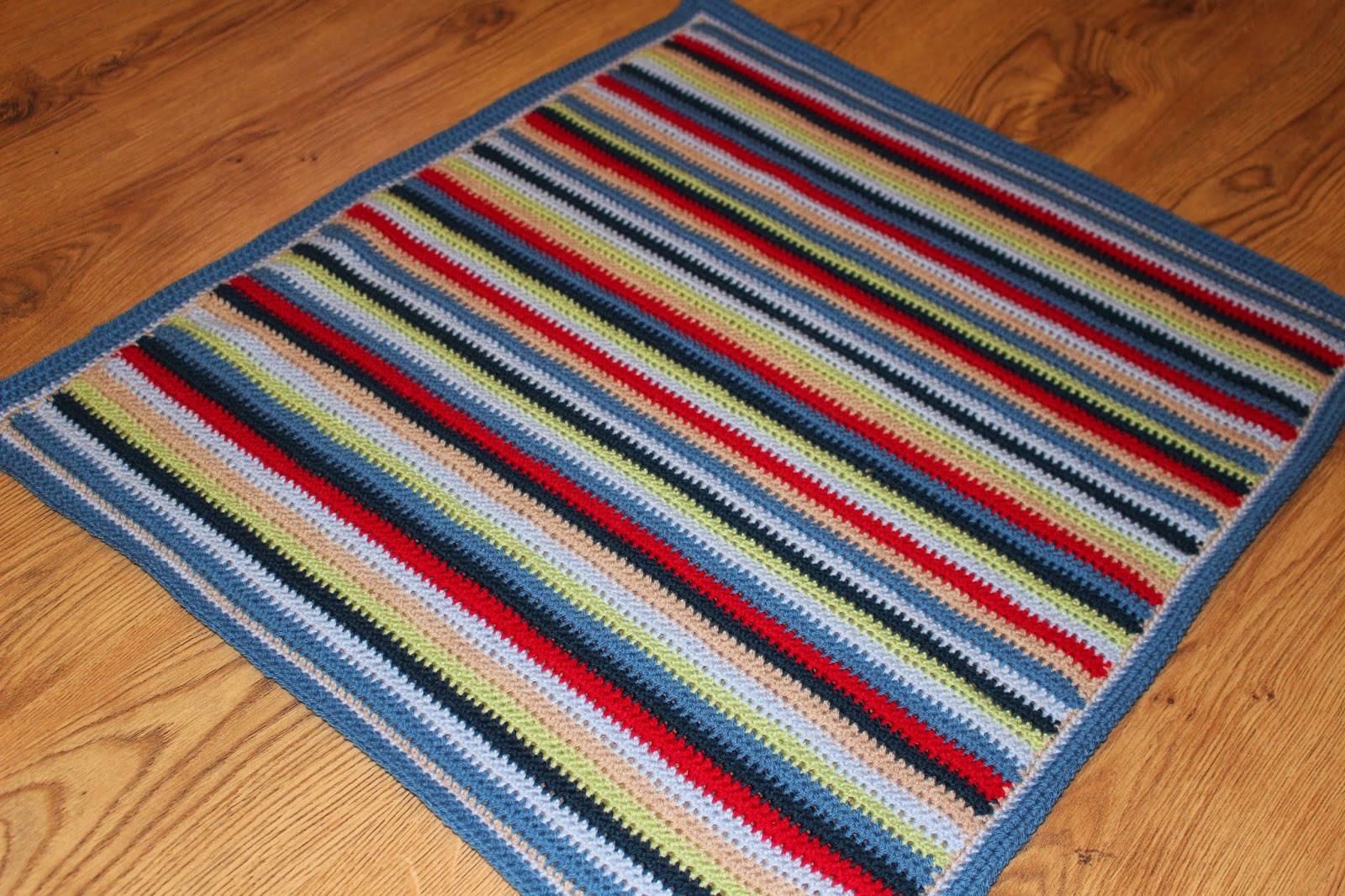 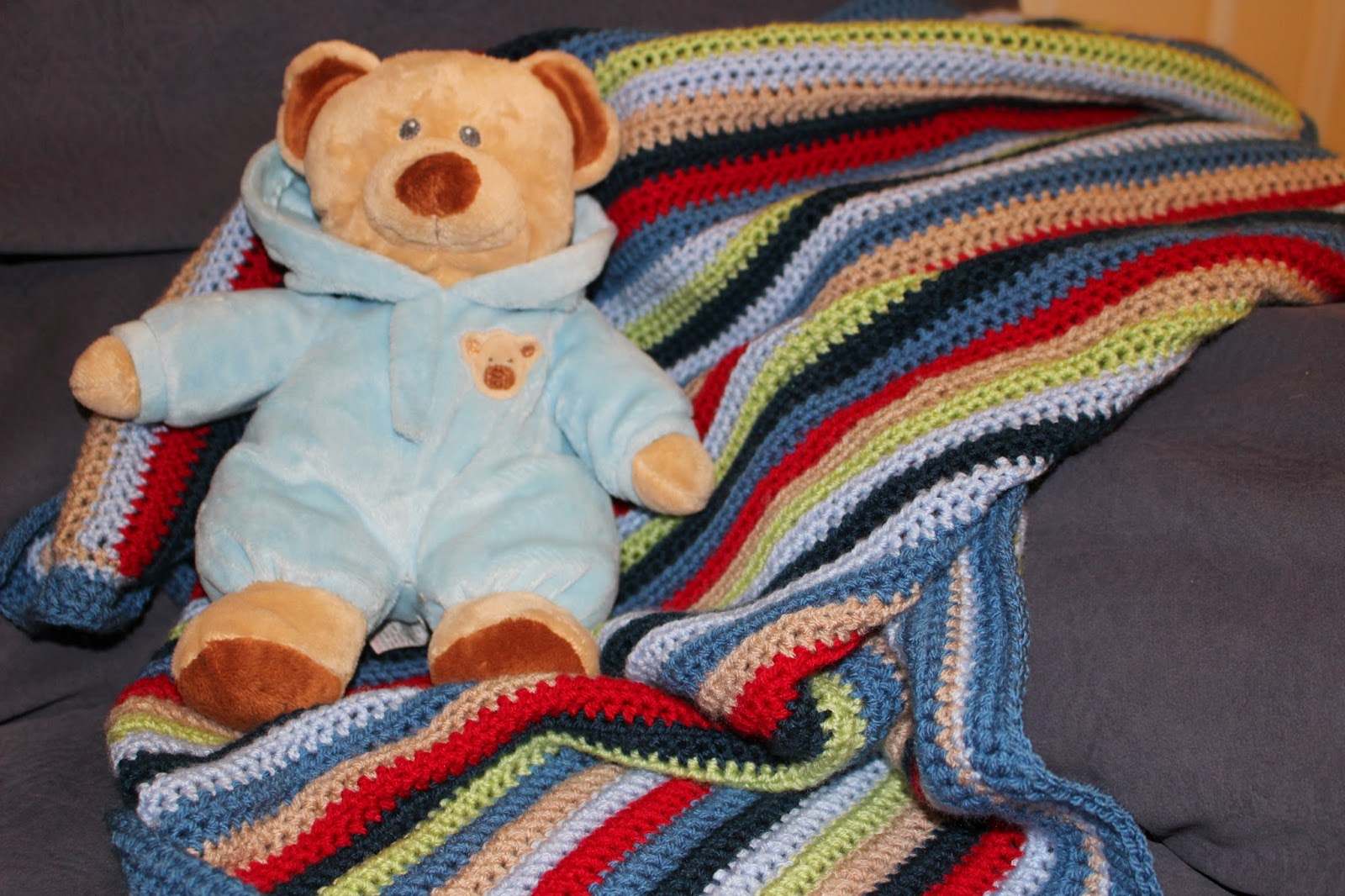 Check out those delicious stripes .... 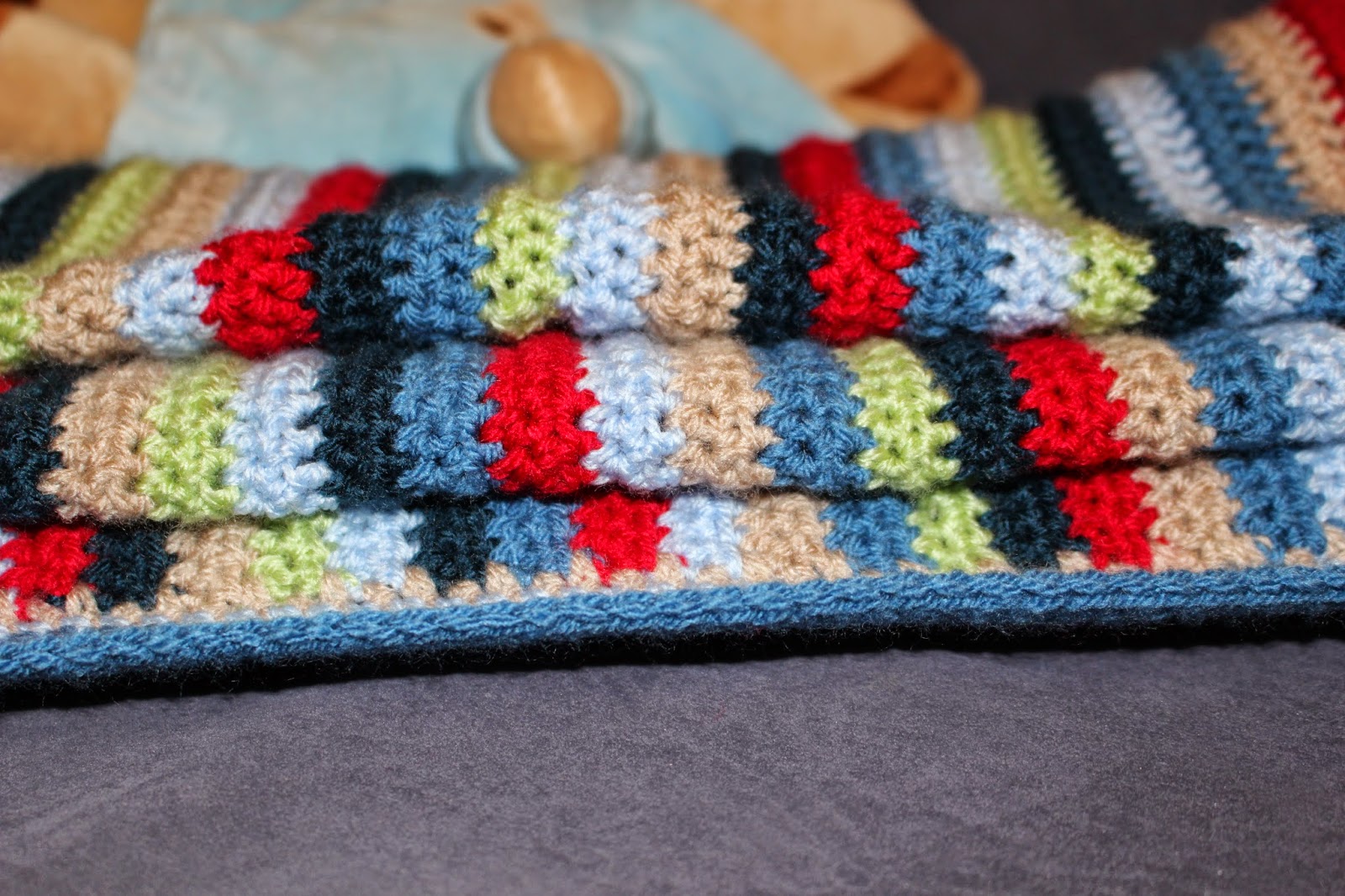 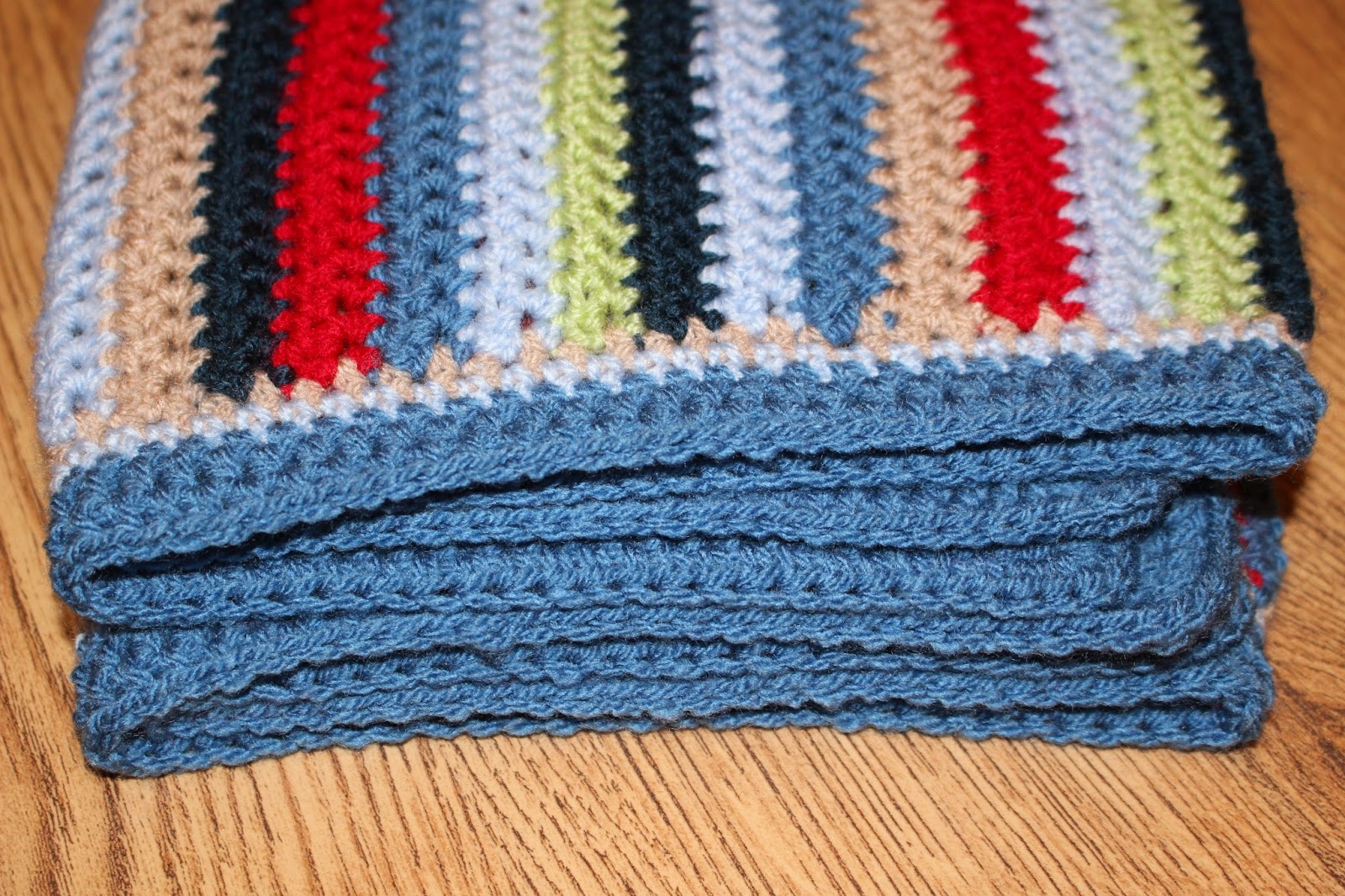 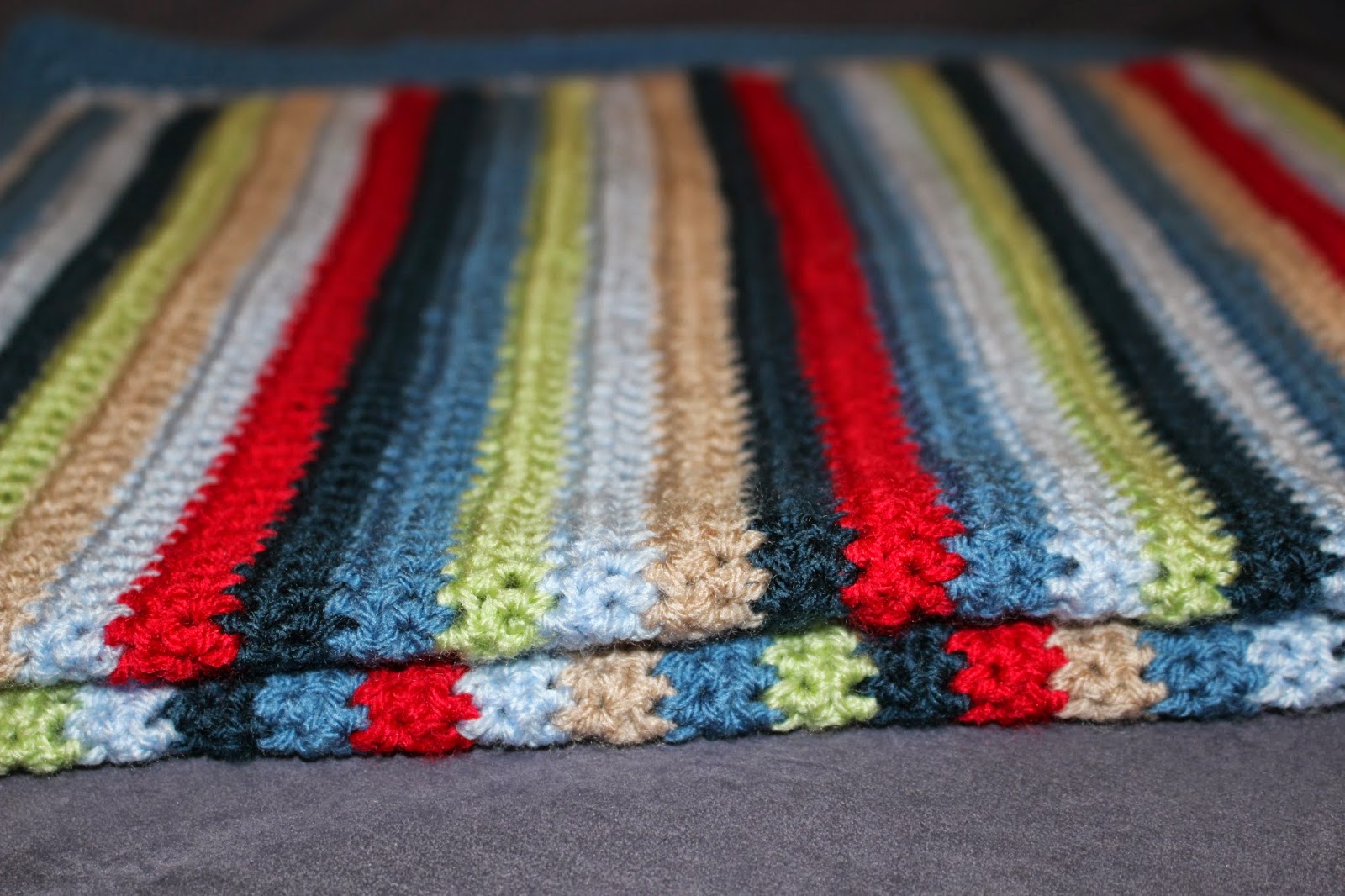 And here's the finished simply stripey blanket all folded and ready to be wrapped and posted off. 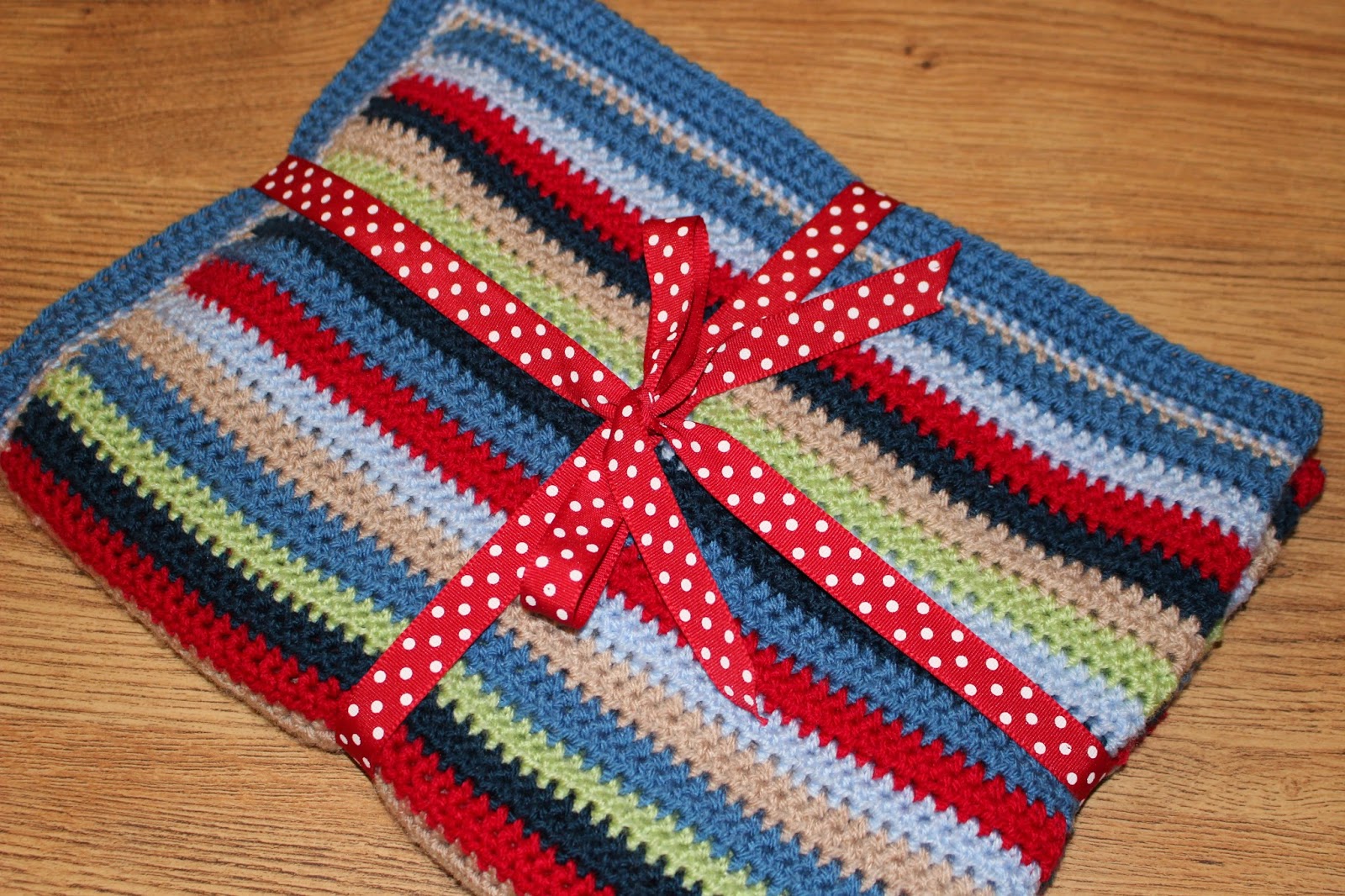 *** Note: Now, I have to say at this point, when something inspires me I try reeeealllyy hard not to go and look at it again, so that I can make my own version and not just a duplicate. Having said that, Jacob's blanket looks pretty much like I totally made an exact copy of Heather's stripey blanket, even uses very similar colours, but I swear I didn't do it on purpose! The image of her blanket must have stuck in my head a bit sort of subconsciously. I hope this can be perceived as flattery though, as Heather's blanket is really lovely :)
Posted by Jill at emeraldcottage at 21:42