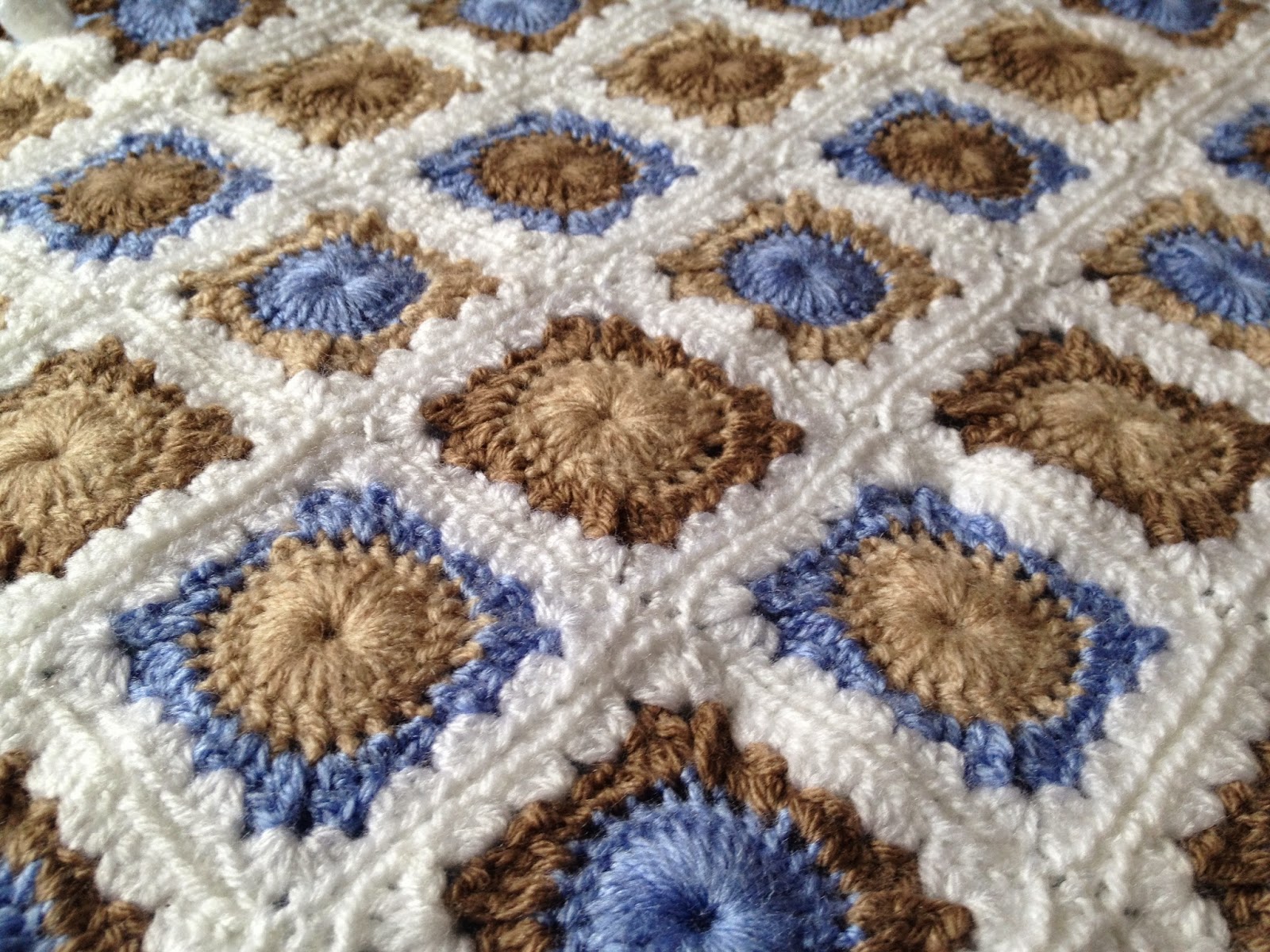 I spent absolutely ages deciding which design of motif to use for Jasper's blanket. Decision making at the start of a project is by far the most challenging part, don't you agree ? Or is that just me ? I considered normal granny square, circle in a granny square, diamond in a square .....  I really wanted a blanket made of squares.

I trawled through loads of books, magazines and Pinterest boards, but eventually decided to use the "dot in a square cot blanket" pattern from the book Granny Square Crochet by Catherine Hirst.
Jasper's Mum and Dad knew before he was born that they were having a boy, so I was able to choose the colour scheme in advance - handy! I used similar colours to Harrison's blanket: white, bright pale blue, and oatmeal, and added a darker taupe sort of colour.

All 4 yarns were acrylic baby DK, for softness and practicality. I used a 4mm hook as recommended by the pattern, but I wish I'd used a 5mm hook, the resulting blanket wasn't as floppy as I'd have liked. 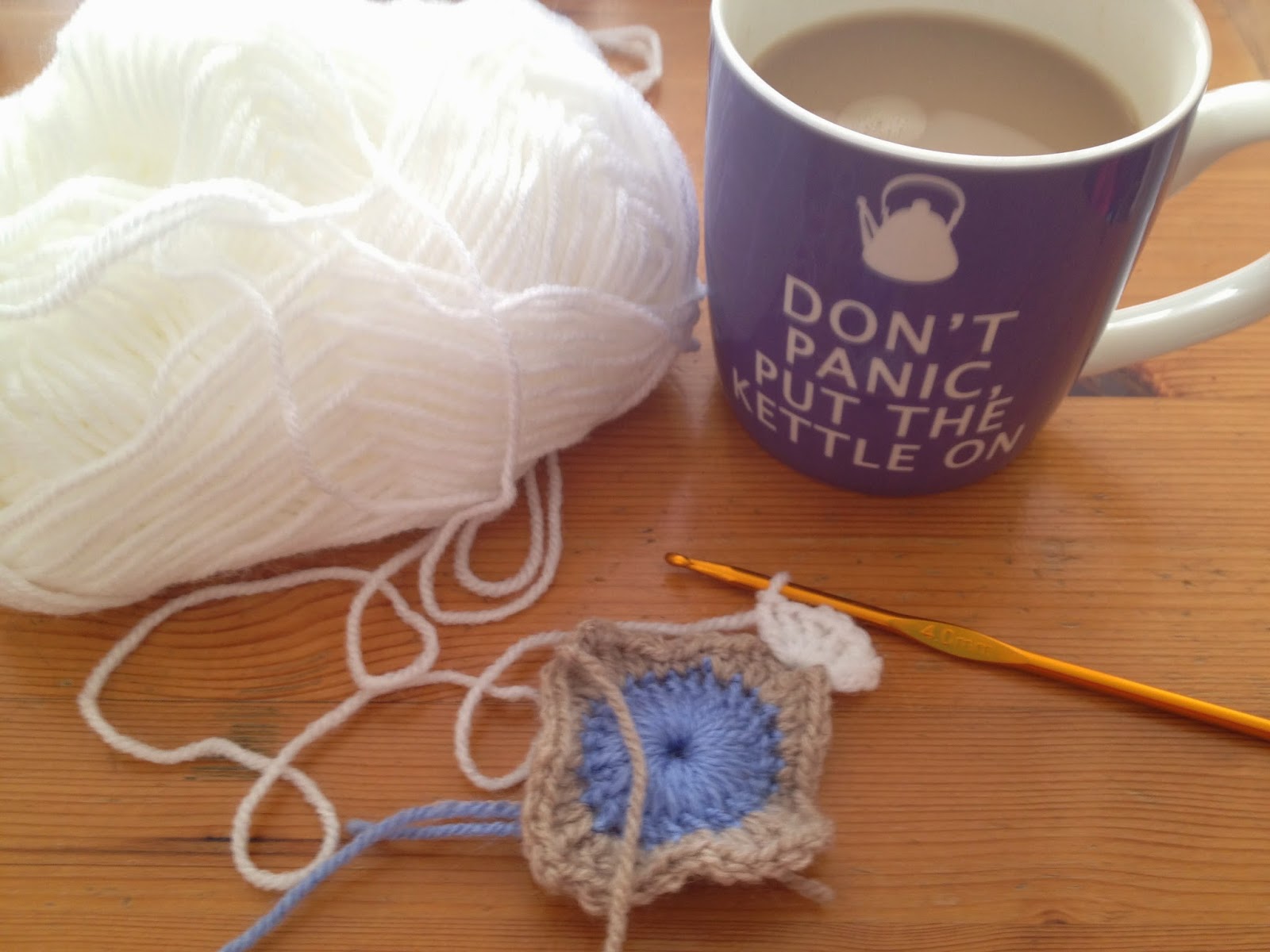 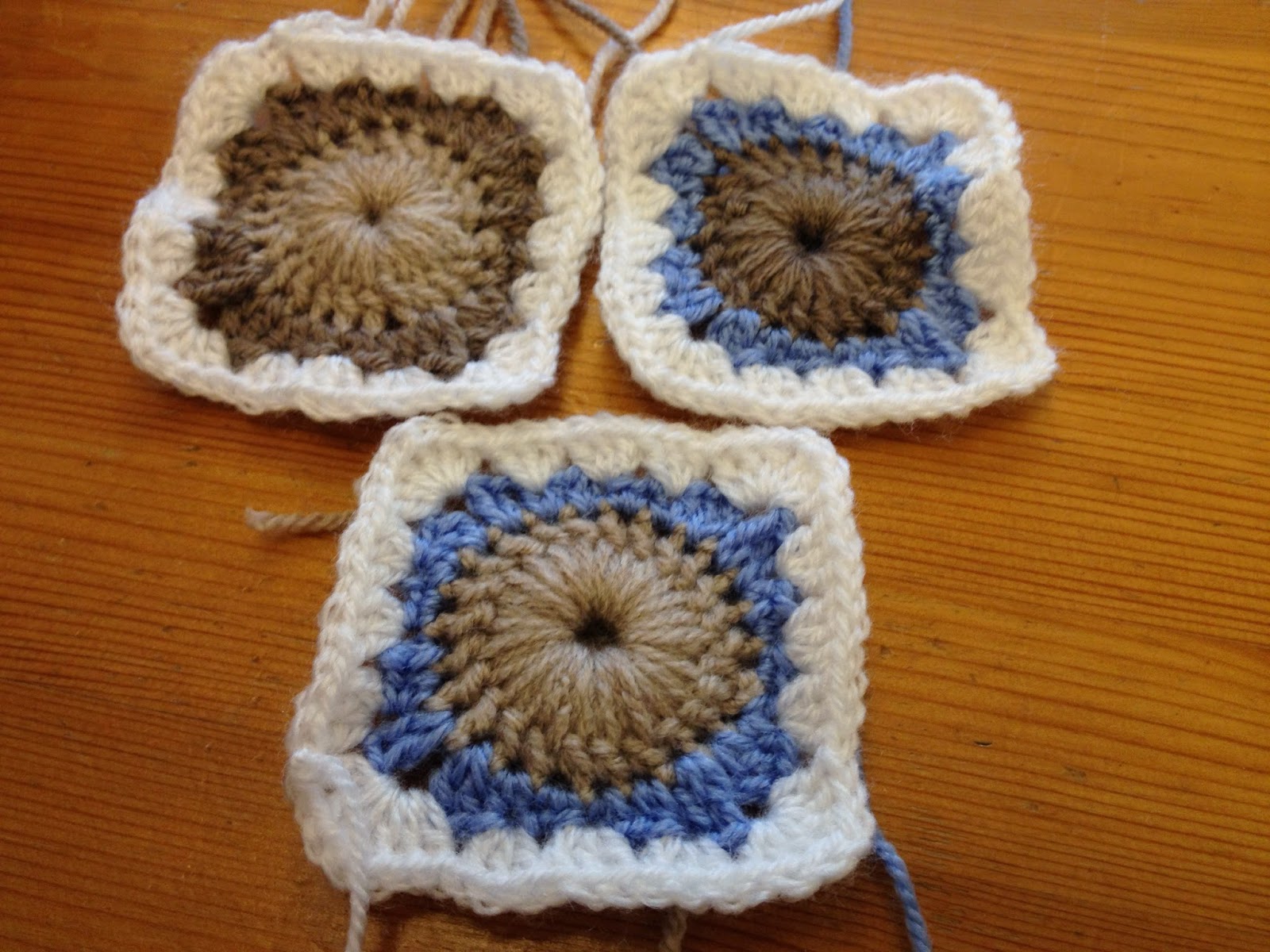 The next round (round 2 or round 4 depending how you look at it) is a series of trebles, half-trebles, doubles, half-trebles, trebles, with 2-chains in each corner, in order to start bringing the motif into a square shape. And the final round of each square is groups of 3 trebles a la granny. There were 6 colourways: 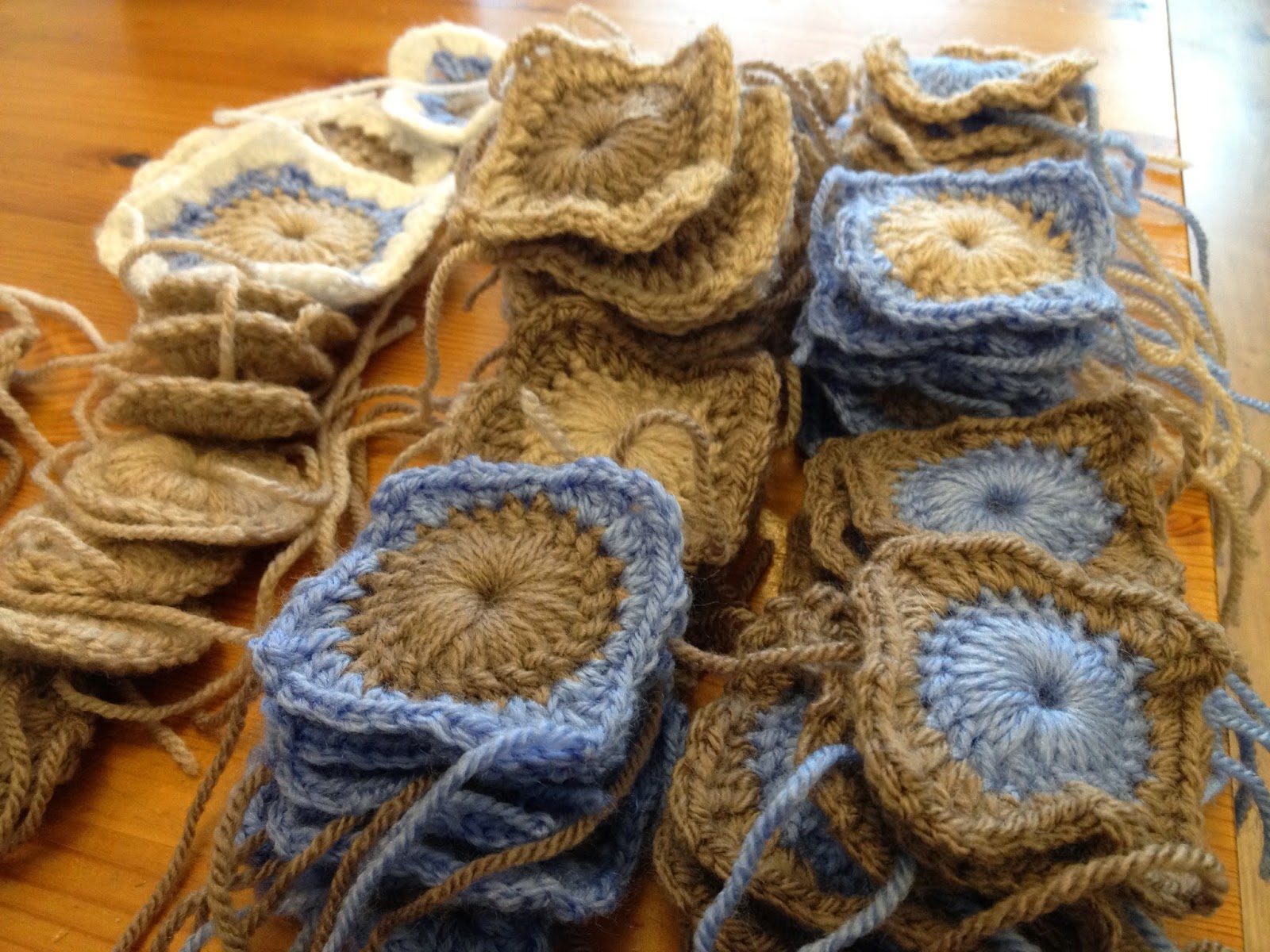 Pretty soon I had a little production line going, and lots of lovely piles of squares and circles. 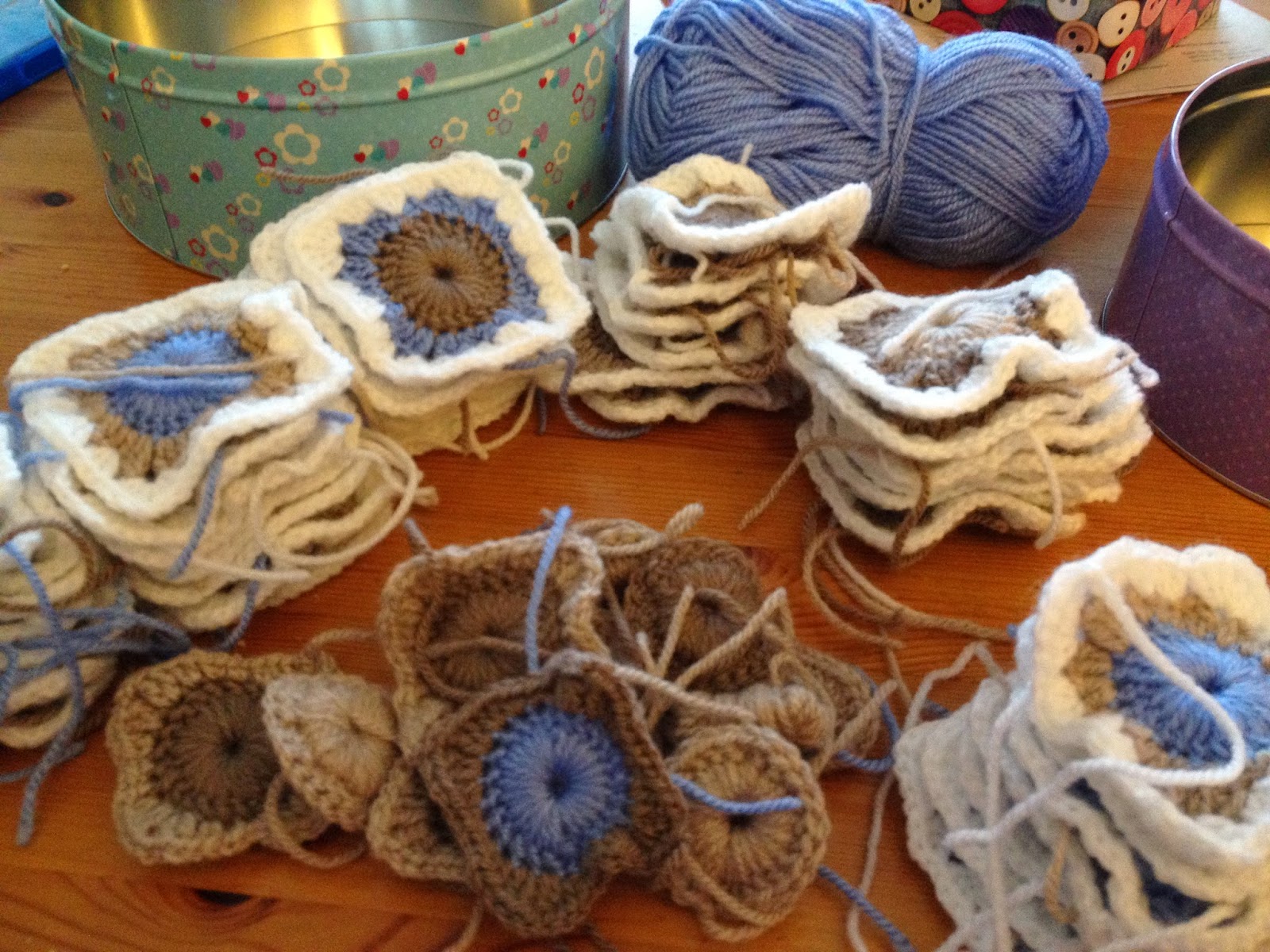 Progress was impeded slightly by the Easter holidays - too much fun in the day, and too tired at night to crochet. I did manage some sneaky hooky time in the park one day though .... 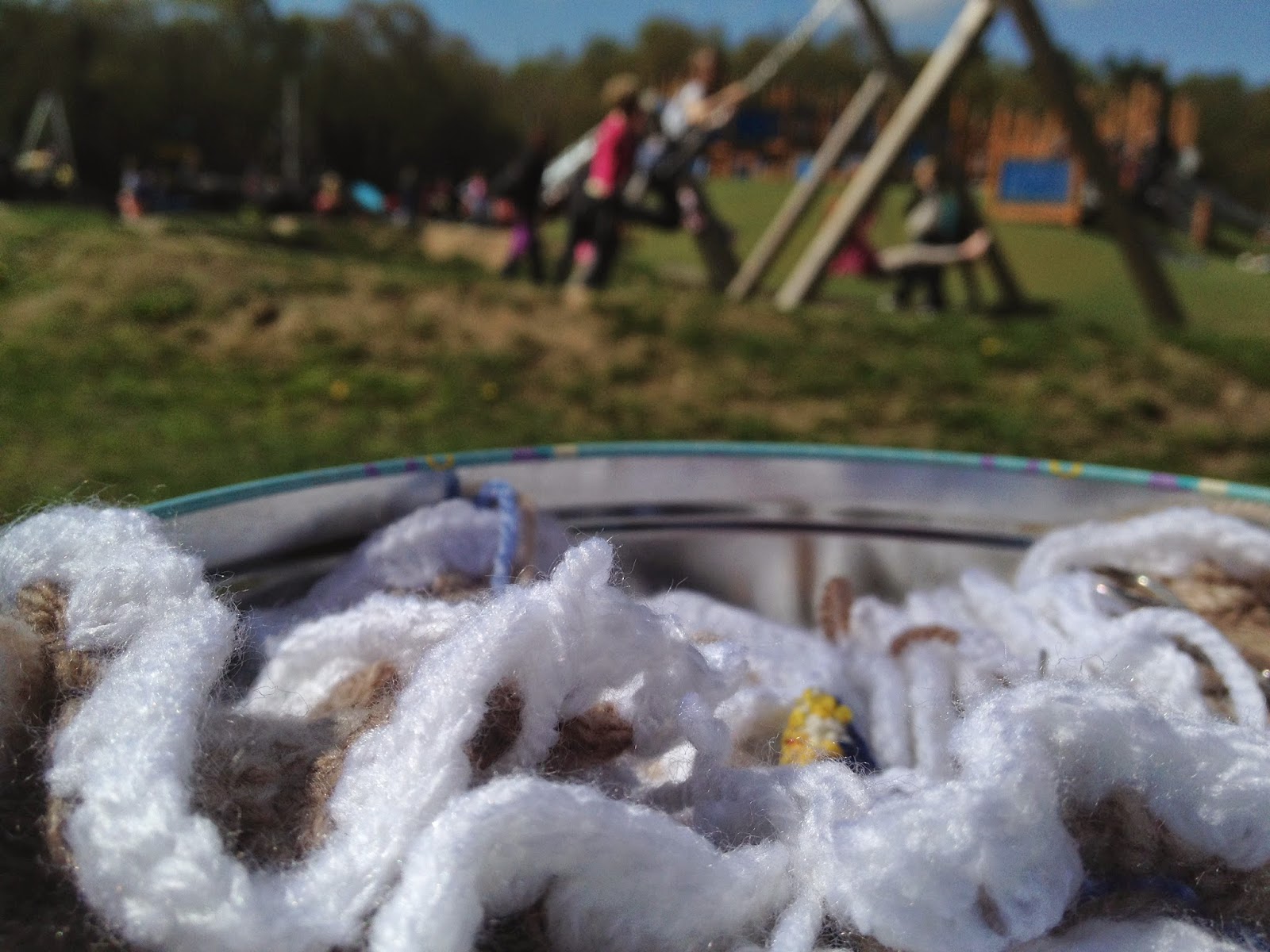 For this blanket I decided to complete each square separately, and then join them all at the end. Oh my Good Grief. I will (probably) Not Ever do it this way again. I've used both methods - joining after and join-as-you-go - in the past. This time I just found the joining such a never-ending chore. The OCD in me does like the structured lines of joining at the end, but it's so much less soul-destroying to join-as-you-go. 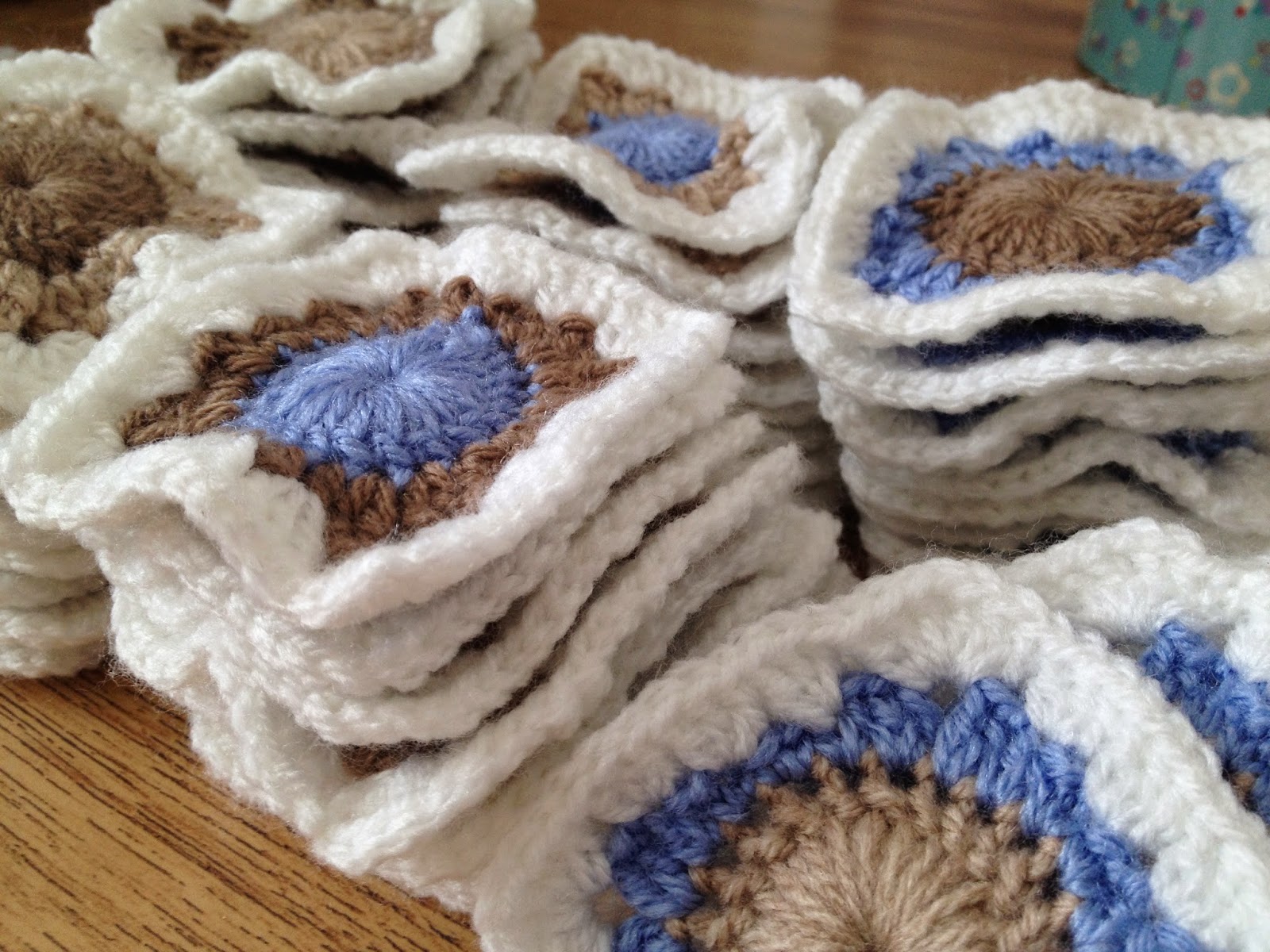 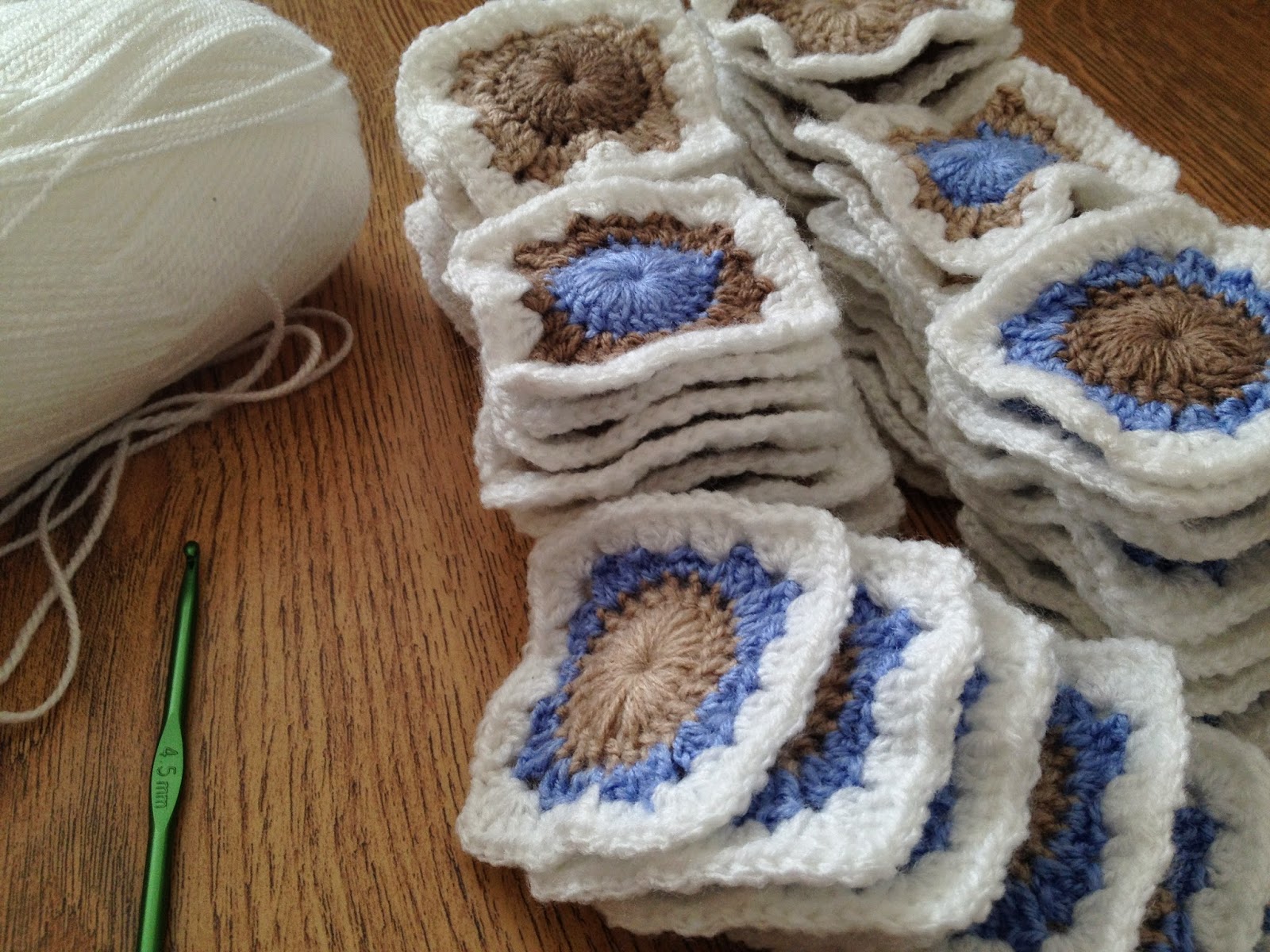 Almost there! Now I just needed to decide on the layout. Did I say deciding upon the design at the start of a project was the most challenging ? Well if that's the case, a close second is settling upon the layout. Indecisive ? Moi ? I quite fancied random placement of colours but as per usual I just couldn't do it! 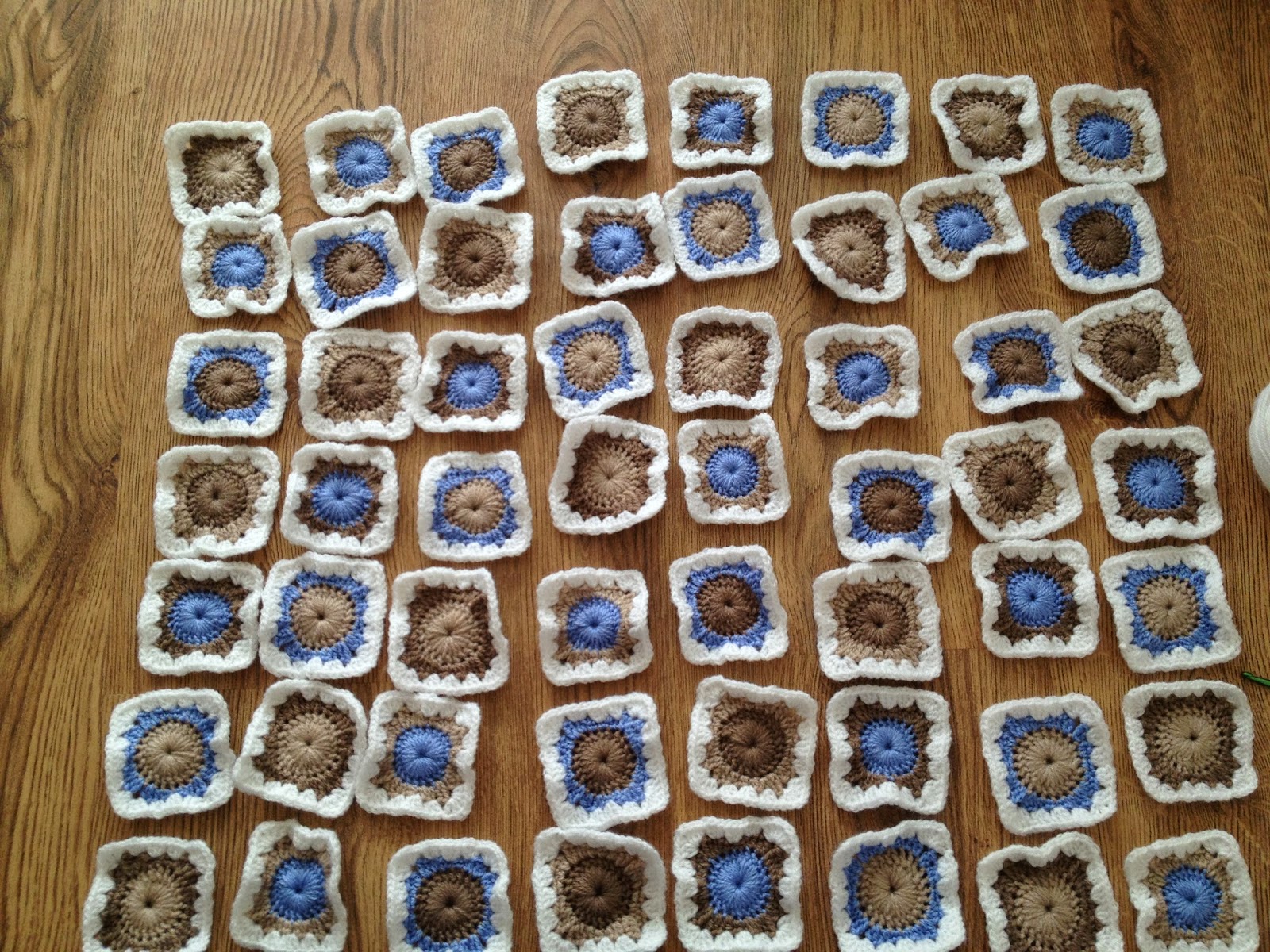 Now, I'd like to say that the next bit was my stroke of genius, but the truth is I totally pinched the idea from another blog. I've tried and tried to find that blog again but can't seem to find it anywhere :(  So to whomever thought up this idea - thankyou - it made things sooooo much easier :)
I threaded each square onto a long piece of yarn - I used green simply because I had a short length of it lying around. Do you like my fancy clear plastic needle .... I borrowed it from one of my girls' toy sewing kits. Couldn't find my darning needle :) 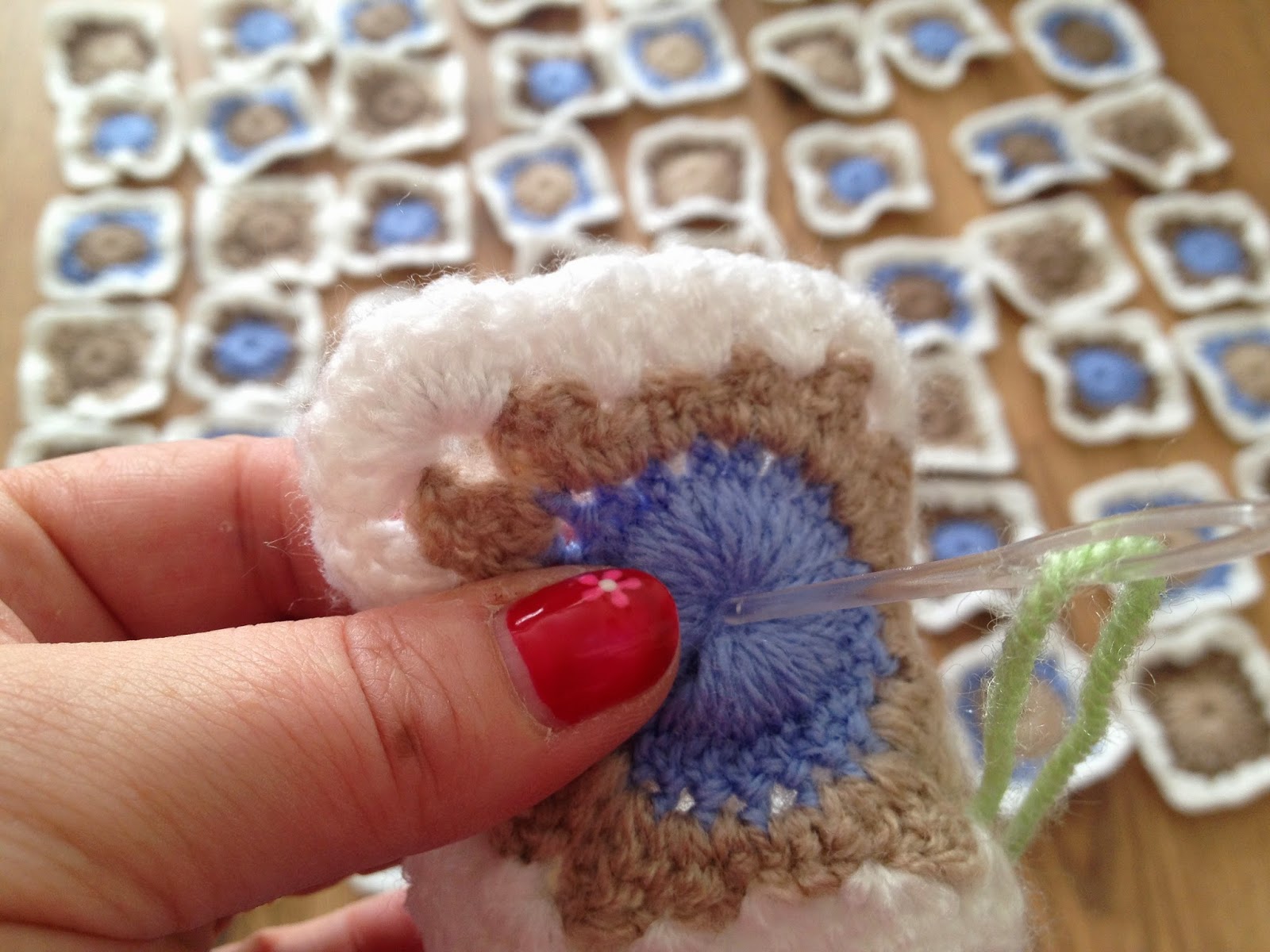 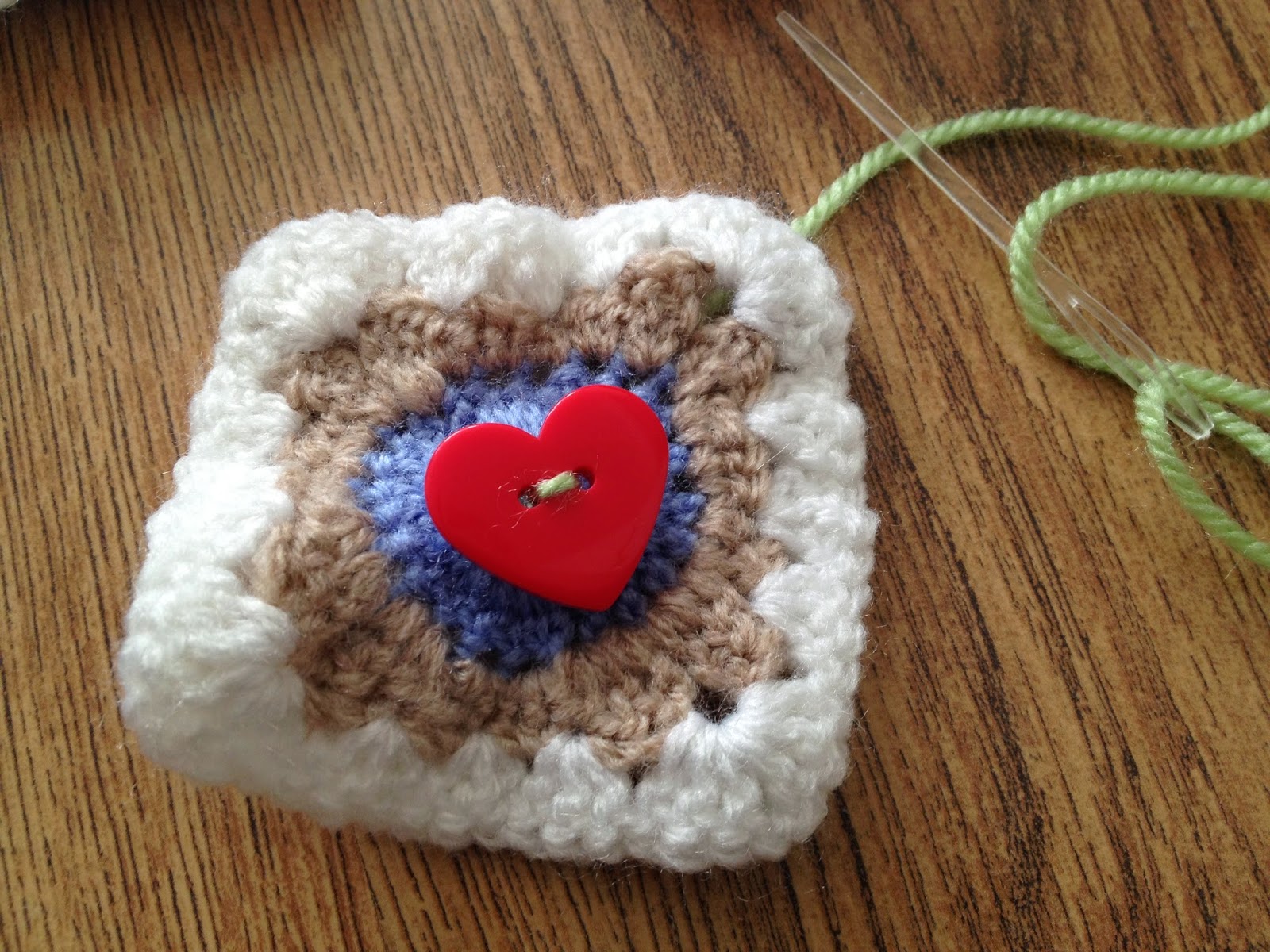 All the squares were then added on in order all the way up the last column in the picture above, then up the second from last column, and so on.The squares would then come off the thread in reverse order, from first column down, then second column down and so on. 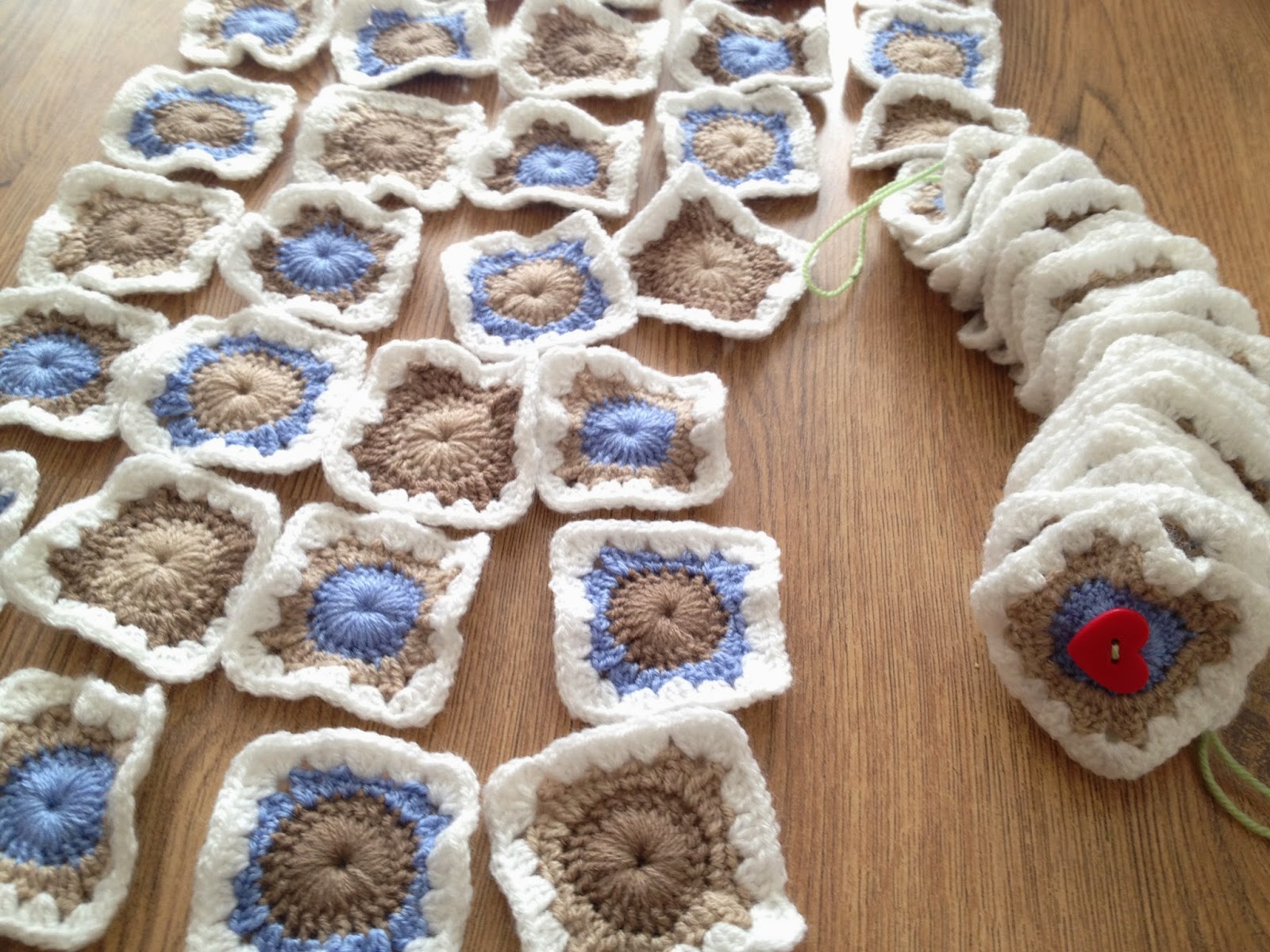 OOoooo don't they all look just scrummy threaded on like that, just waiting to be joined up :) 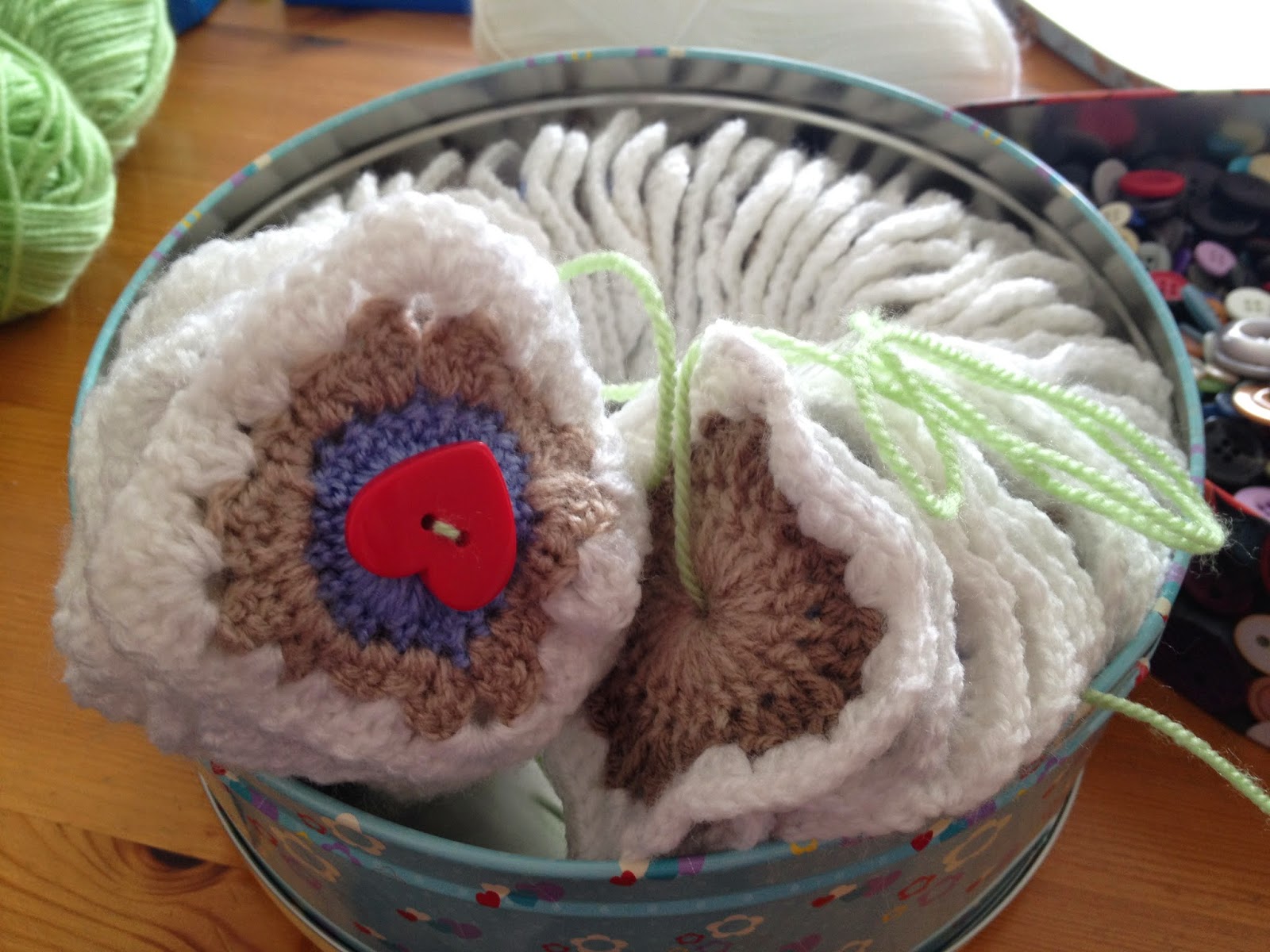 As I said, the squares come off column by column.  You join all of column 1 squares to all of column 2 squares, then column 2 to column 3, etc etc. Can you see in the photo that the columns are joined but the rows not ? 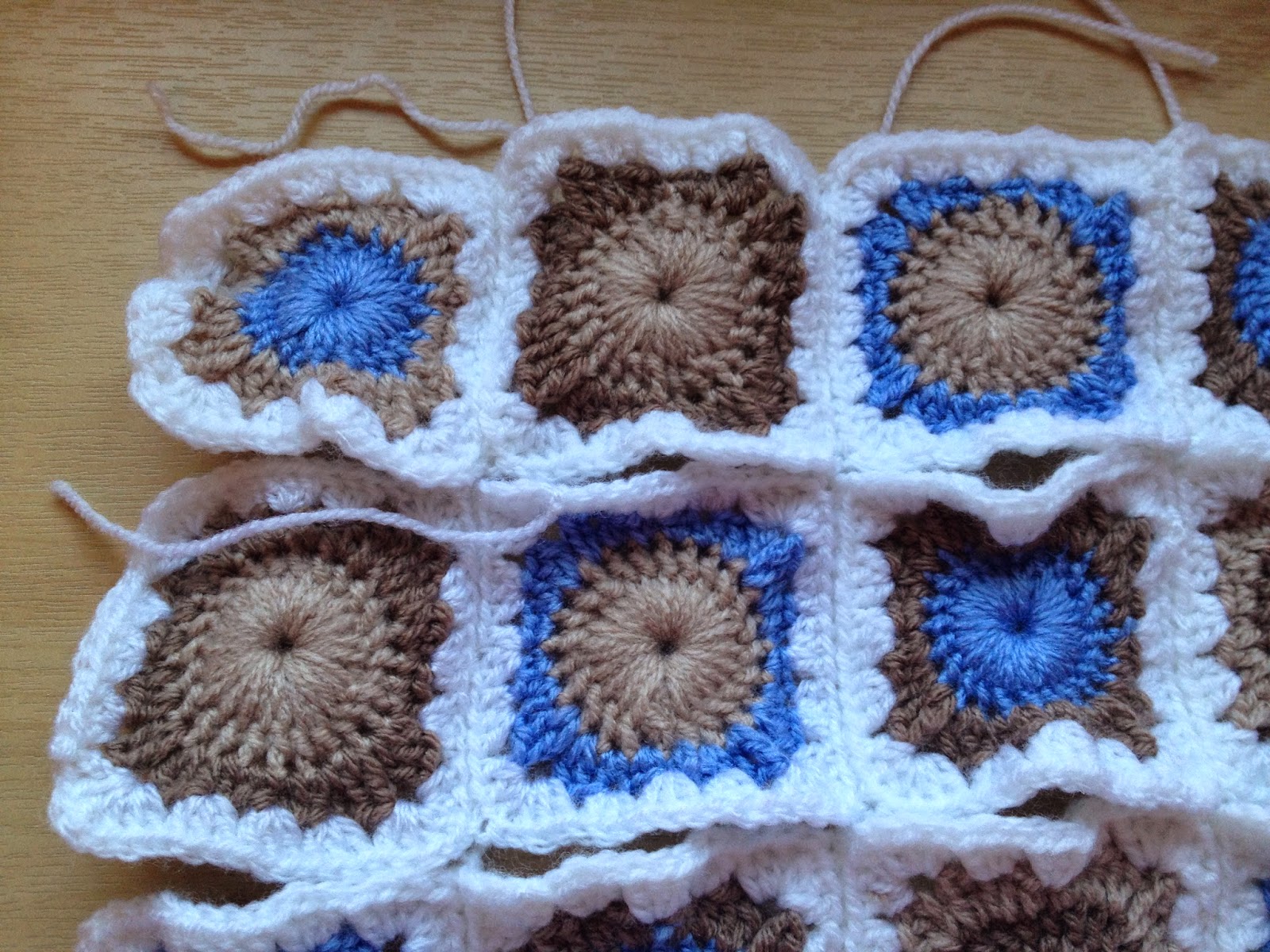 The squares were joined to each other by holding two squares right-sides together and doing a double crochet into the back two loops of corresponding stitches in each square. Hope that makes sense. I'm sure you kind of get it though :) 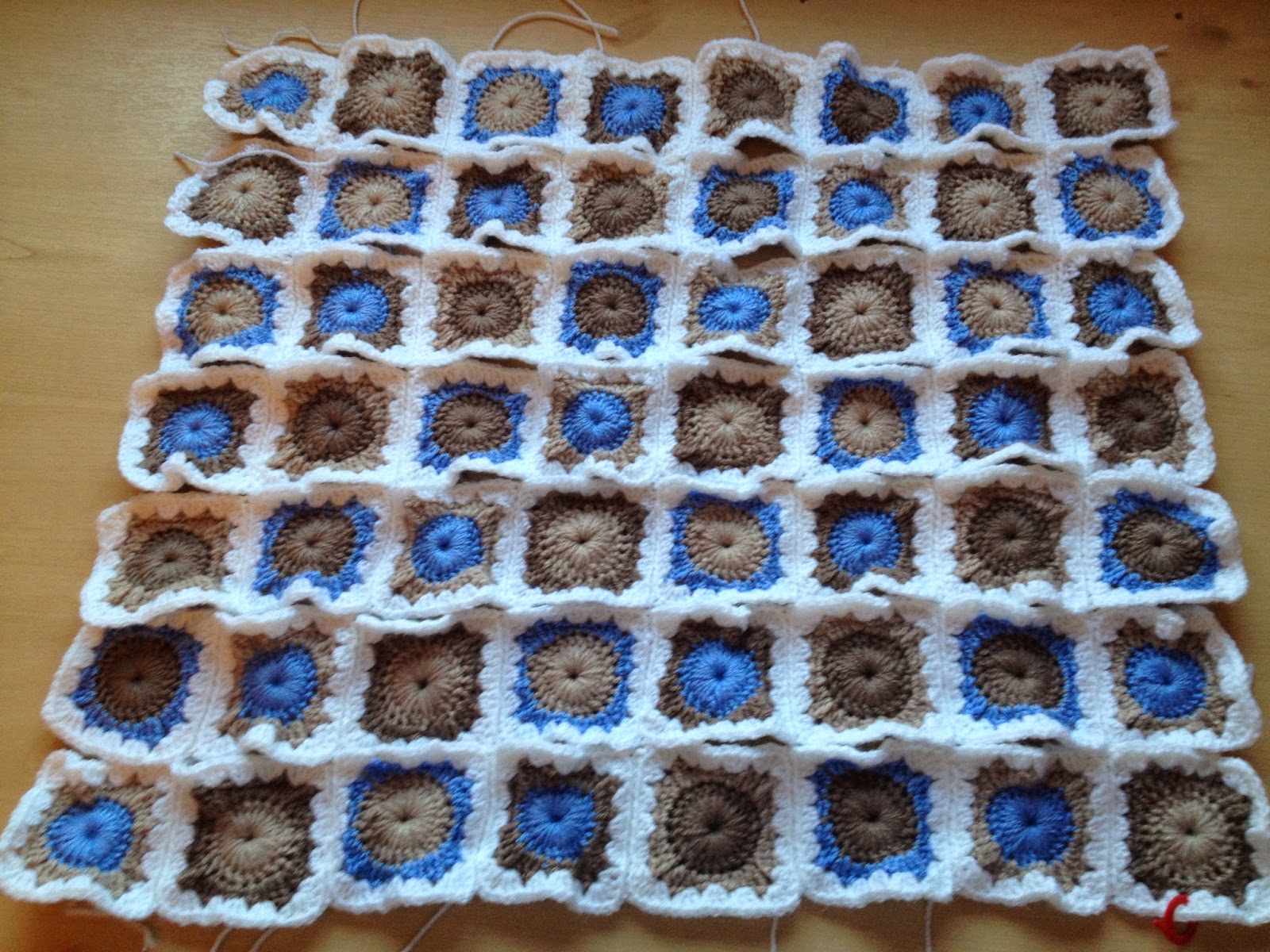 When all the columns have been joined you then join the squares again, but by rows this time.
Aaaaahh finally got the joining all done - phew! 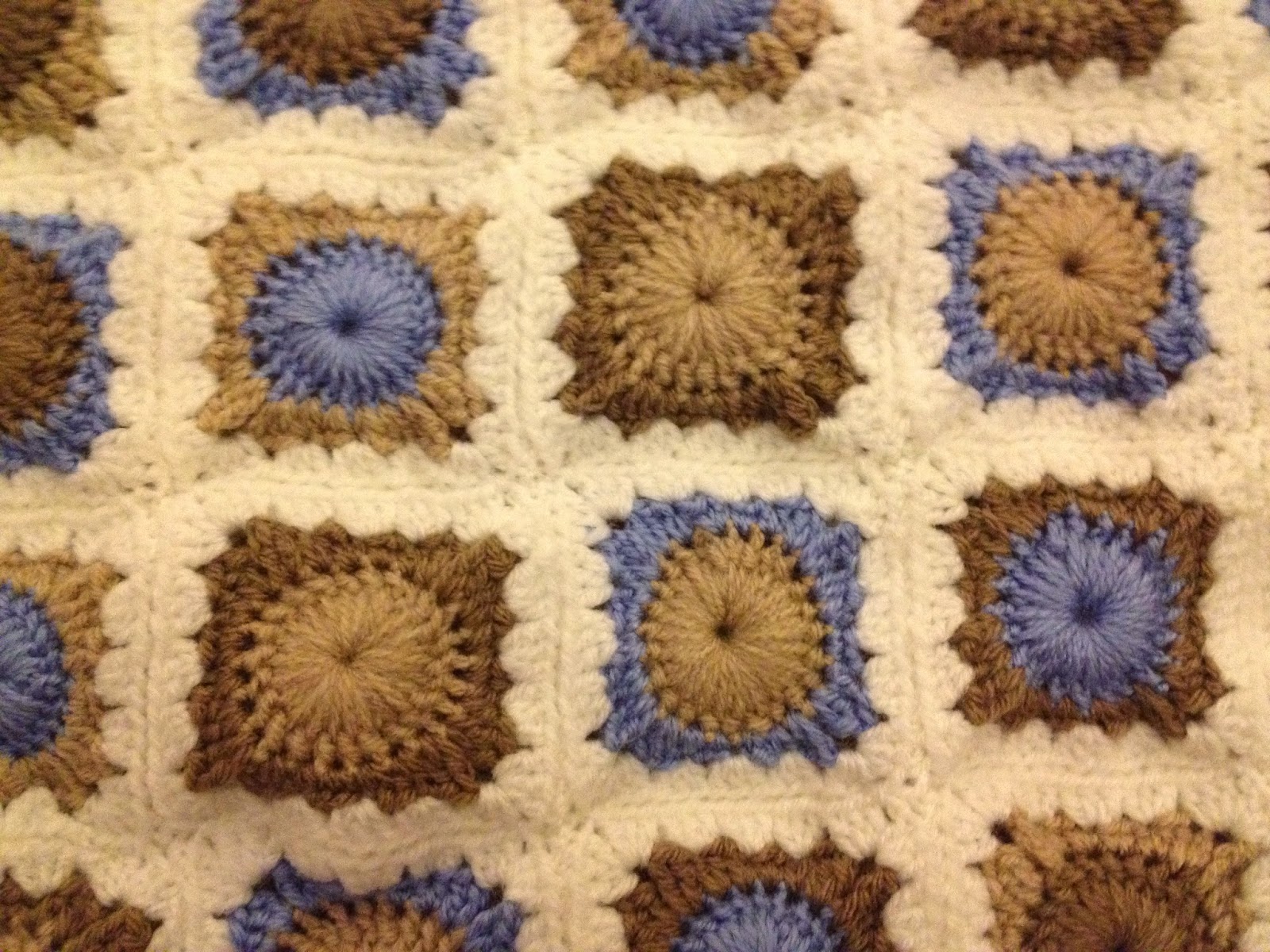 Now only got those pesky ends to deal with, and a border to add, and a tiny bit of blocking to be done .... 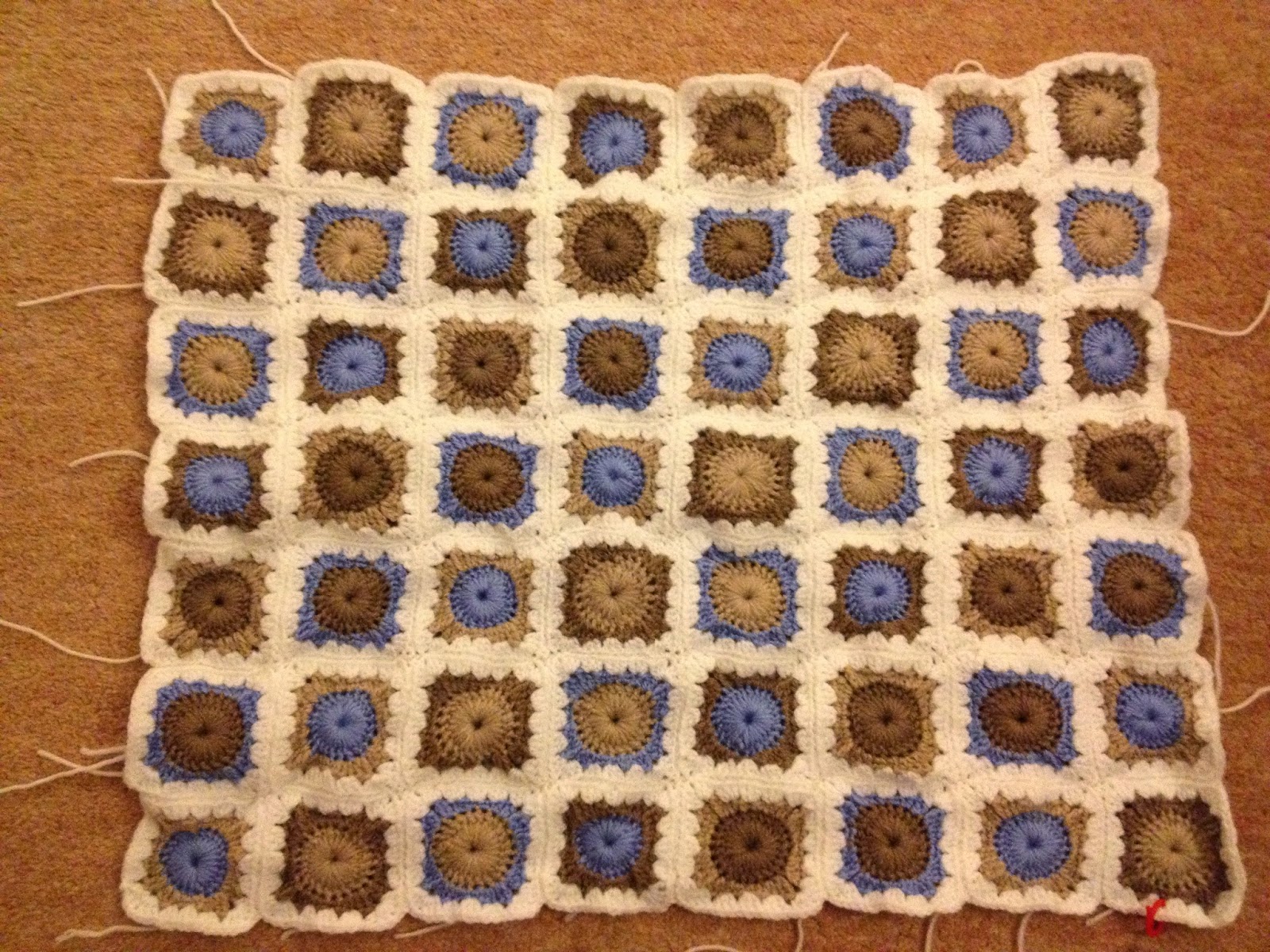 The border was simply 2 trebles in every stitch all the way around, makes it delightfully ruffly. 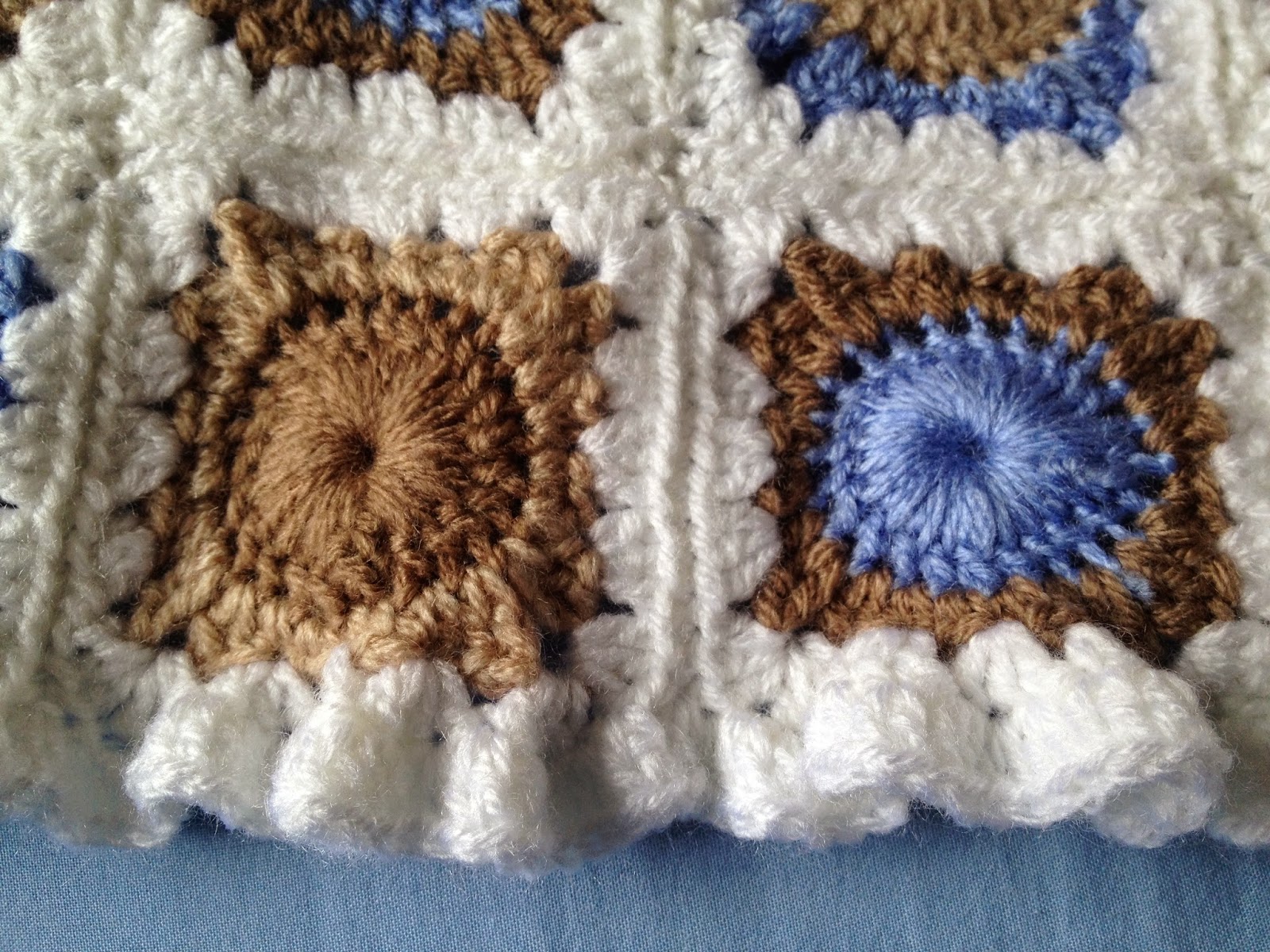 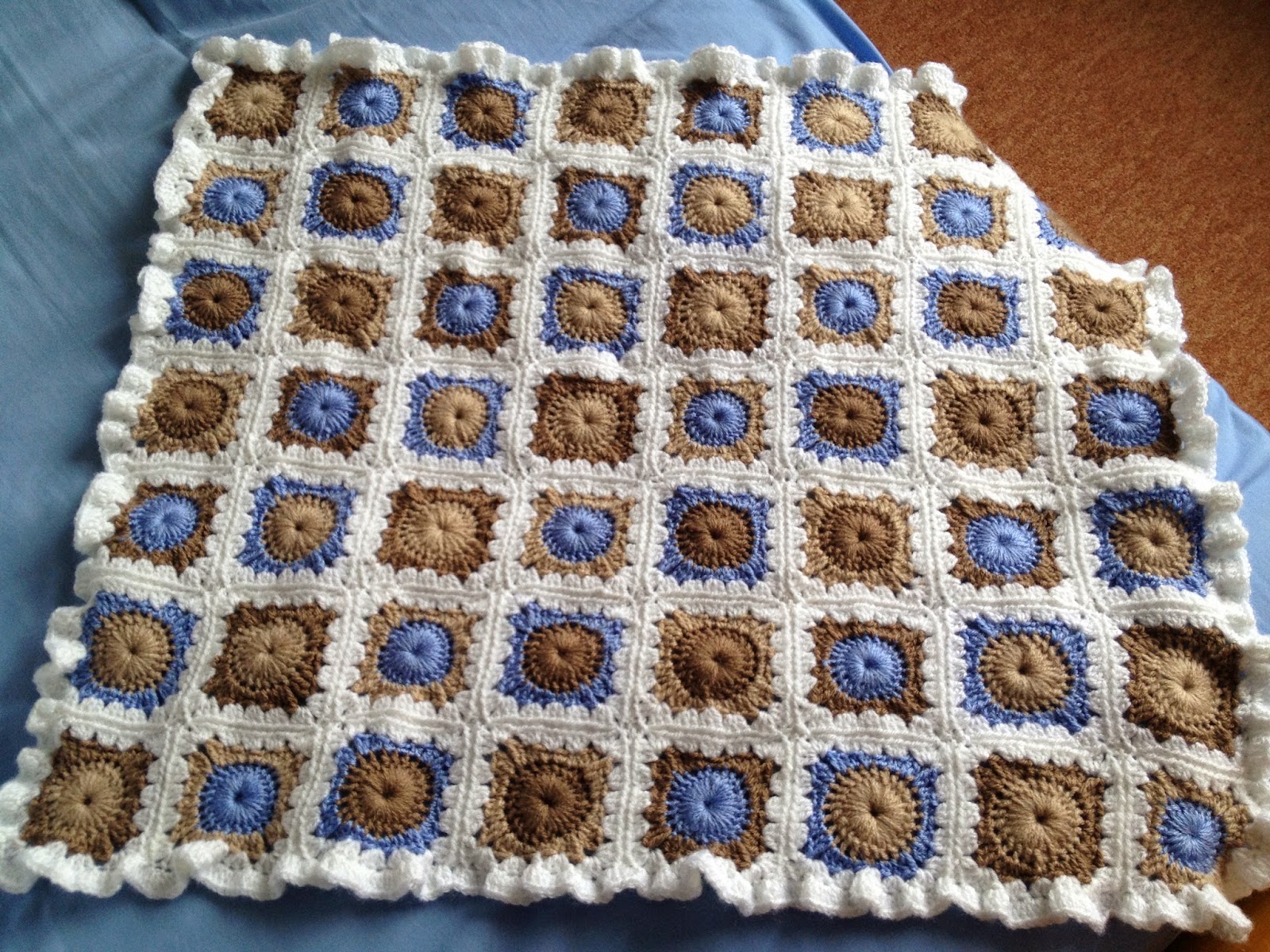 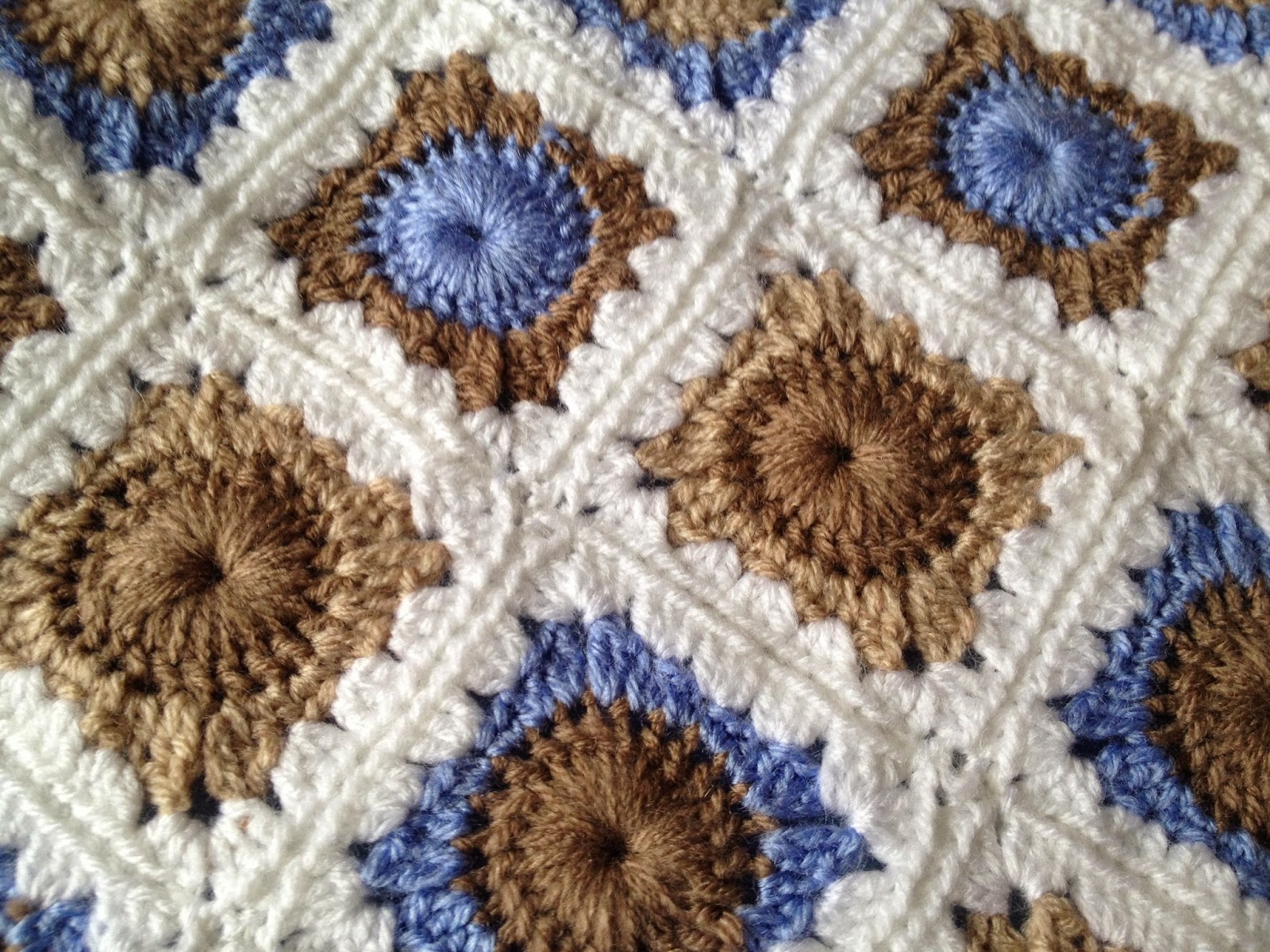 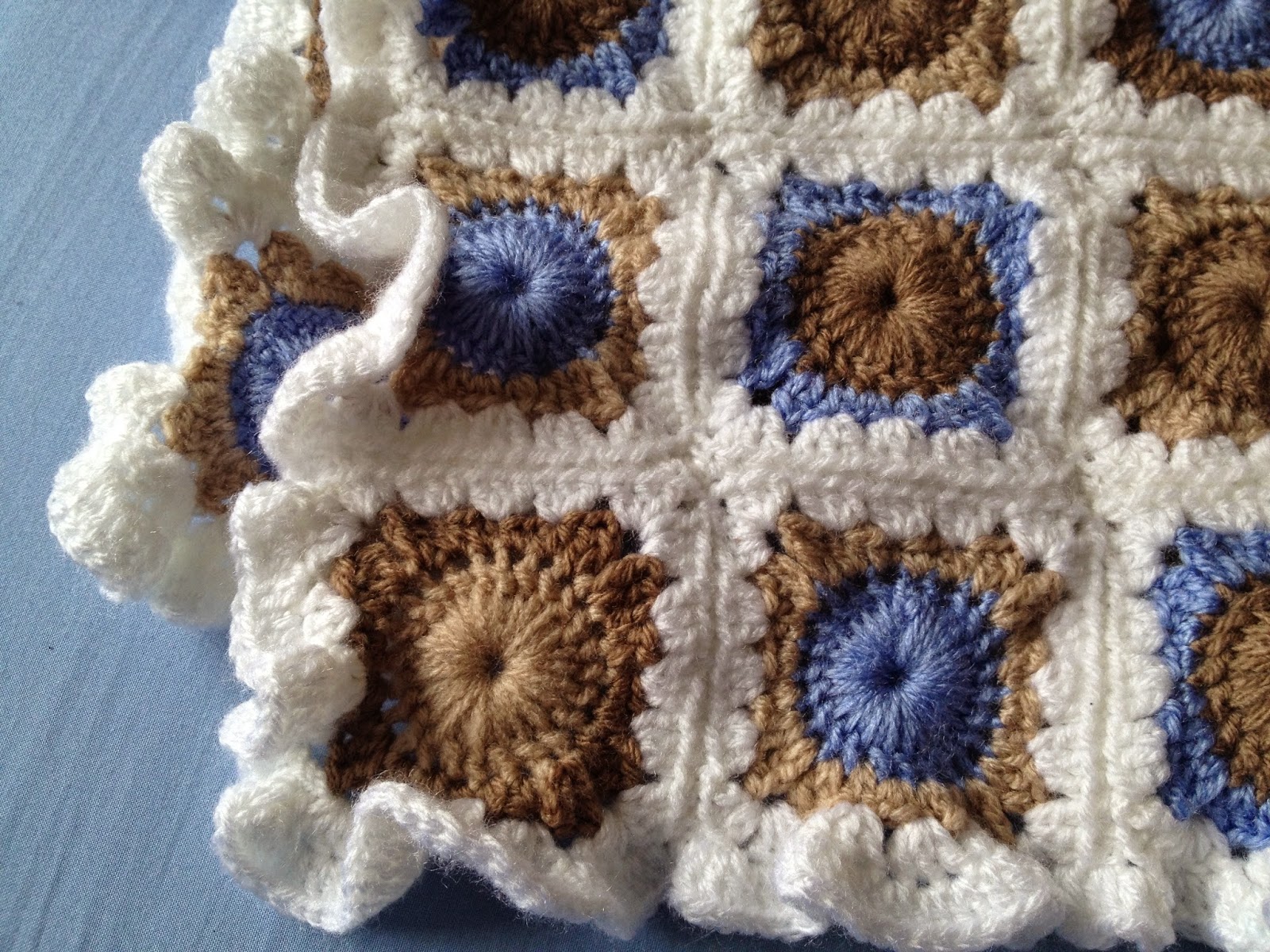 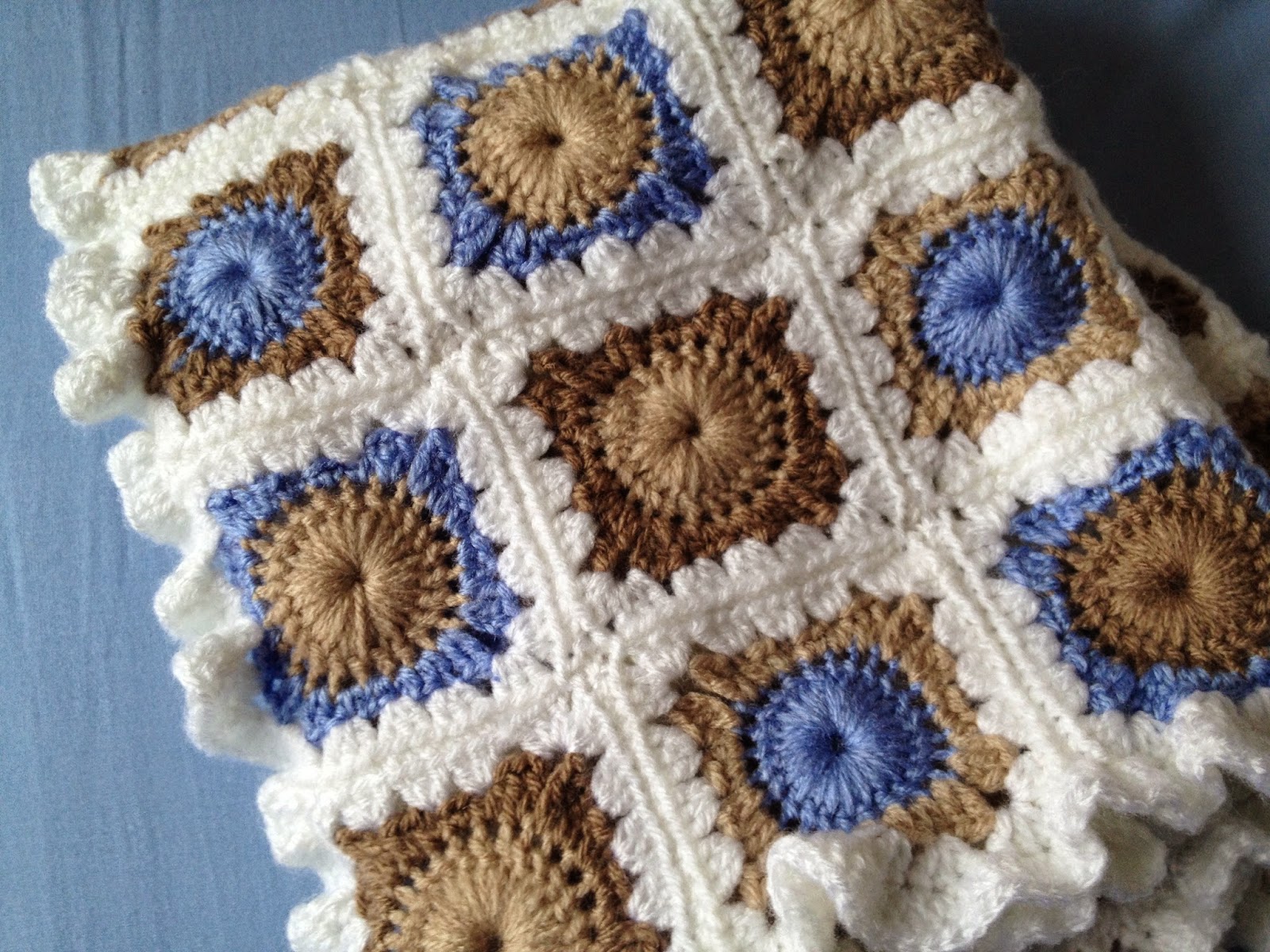 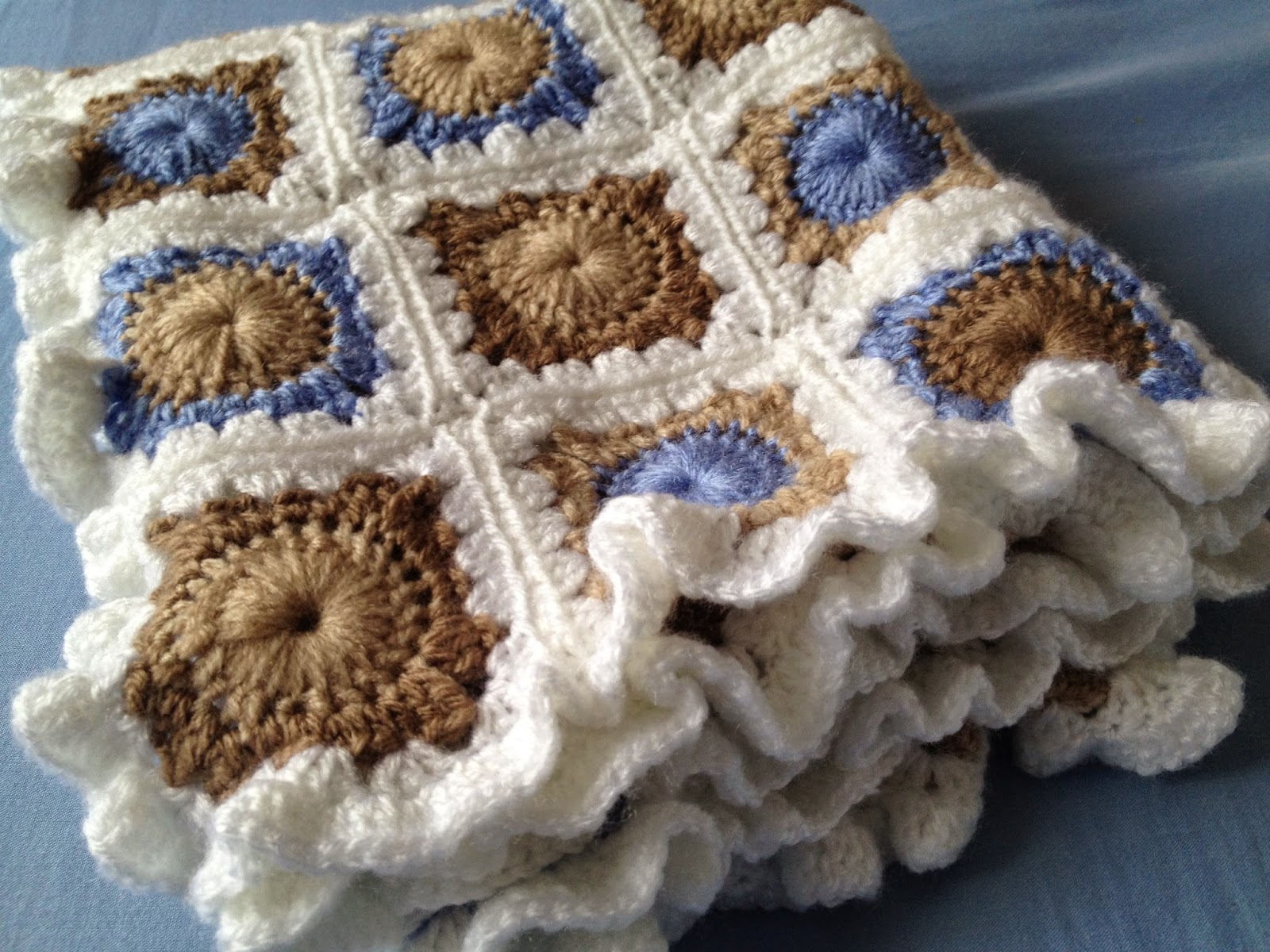 Jasper came for a visit this week. At six weeks old he is so gorgeous, still in that snuffly cuddly stage, and just started smiling. I gave Mum and Dad his blanket, and they were smiling too :)
Posted by Jill at emeraldcottage at 23:39