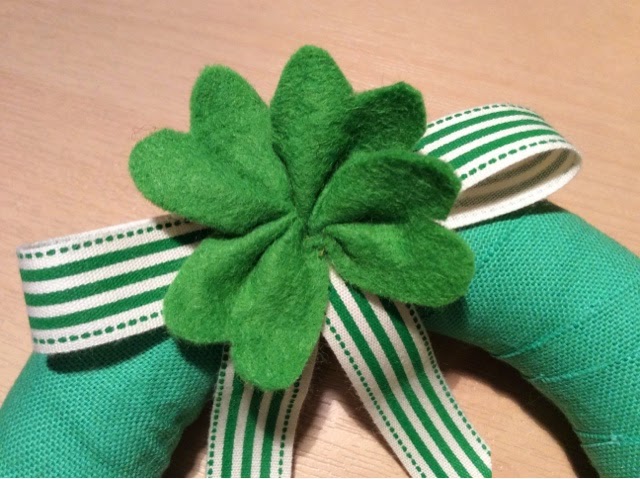 People from Ireland are the people who least celebrate St Parick's Day, at least in Northern Ireland, and at least when I lived there. I do seem to remember that we got the afternoon off school to watch some inter-school rugby final, but other than that I don't remember celebrating it in any way. Of course that may have changed now what with the internet an' all. I know that our cousins across the pond go a bit mad for St Patrick's Day, and certainly in England it's a day of (albeit minor) note. Usually I will wear a green top or scarf and perhaps have some soda bread or Guinness, but this year I didn't even do that. My (English) friend ran up to me in Sainsbury's earlier, gave me a massive hug, and shrieked "Happy St Patrick's Day !!! Bless her, it was very sweet :)

Little Miss had to "bring something from Ireland" to Brownies tonight. I said "bring me, I'm something from Ireland" but thankfully she took it as the joke it was intended and did not make me accompany her. Instead, after scouring Pinterest, I made her a little leprechaun hat fascinator-come-headband to wear. The pin sent me to a ravelry pattern here (http://www.ravelry.com/patterns/library/st-patricks-day-fascinator), so big thankyou to Helen Whiteley for making it available :)

I made 90% of it waiting for Little Man to come out of the school, and the last bit while I was making dinner. A bit of a rush but here's how it turned out .... 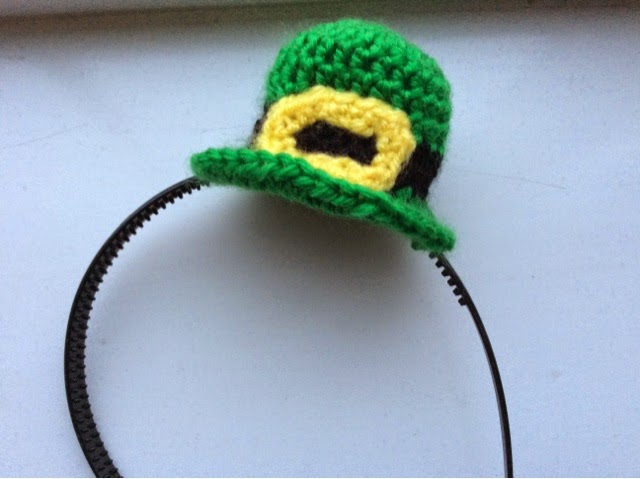 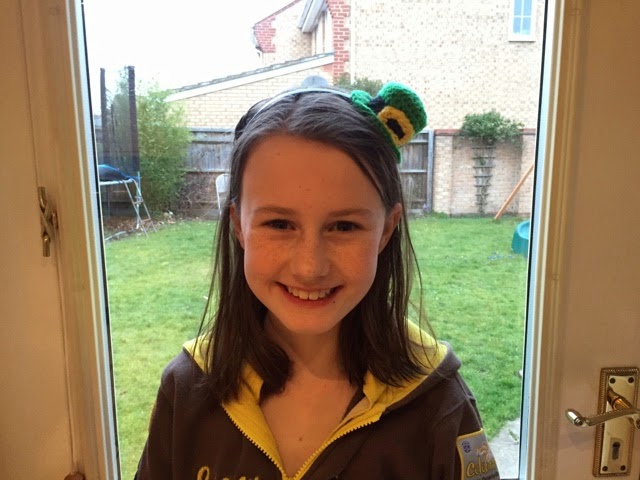 The photos are rubbish, sorry. It was 5.50pm. I had to finish drying her hair, fish her top out from the tumble drier, get her to finish her dinner, and finish the headband thingy and get to Brownies for 6pm, so no time for decent pics. She was late, yes. Oops.

Now everyone knows that you can't just go on Pinterest, find a pattern, and leave. That would be most rude. Naturally you have to spend loads of time browsing other stuff but usually not making anything else. Today though I decided to capitalise on the St Patrick's Day spirit and make a little wreath too. I gathered some bits and pieces .... 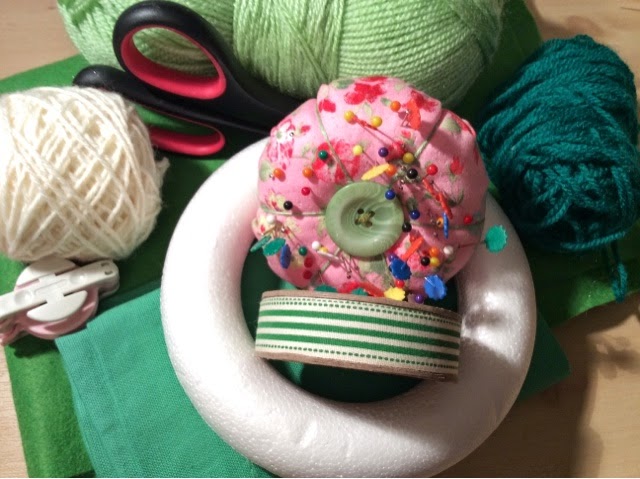 The little inconspicuous pink and white plasticy thing on the left is a pom-pom maker. Have you ever used one ? They are great fun. Much easier than getting all cross with cardboard. Here's a quick lesson in pom-pom making.

1. Get your pom-pom maker ready - it starts off like this (this is my slightly bigger one), 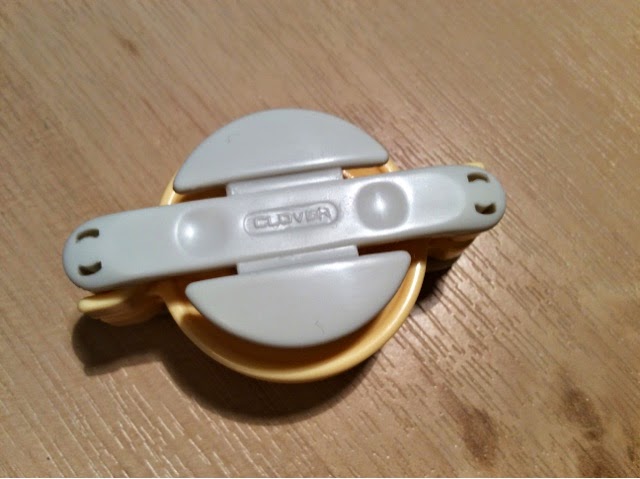 Both sides have 2 foldy-out arm things. 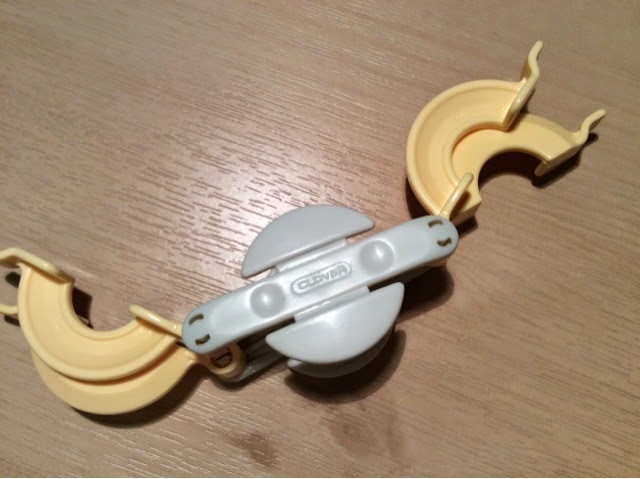 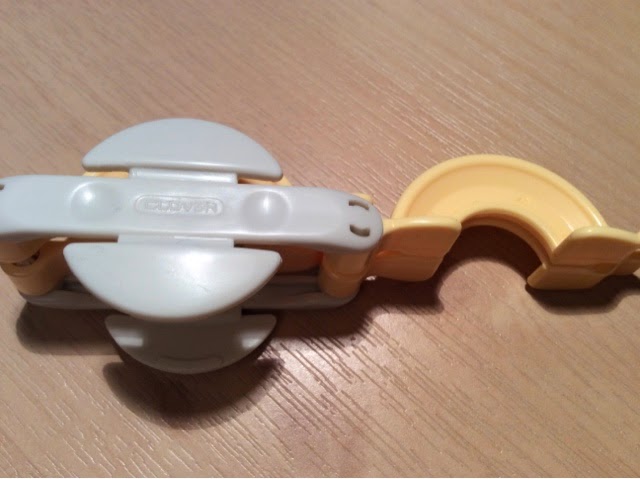 3. Start wrapping your wool round the arches of the folded out arms. Just keep going round and round, over and over, with an even distribution, until there is only a small space left at the centre. 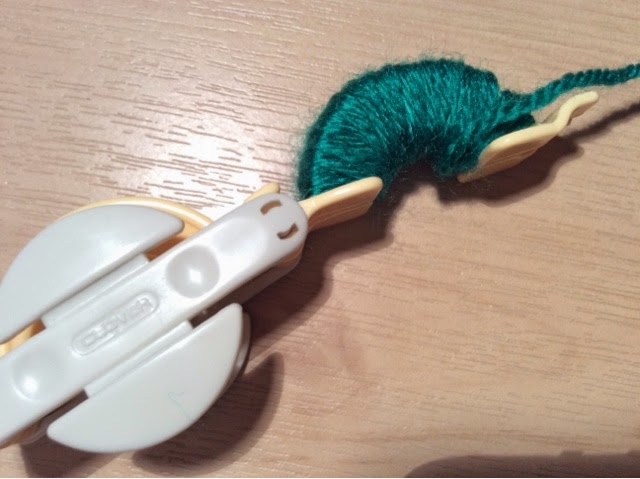 4. Now fold that side away, and fold out the other side. Start wrapping again. 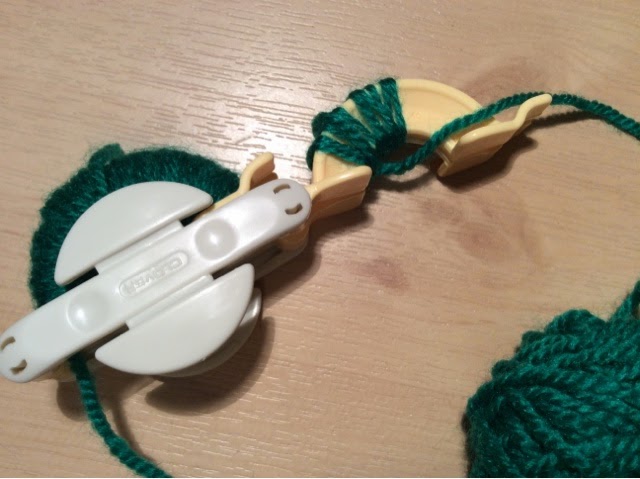 5.  Once the second side is wrapped, fold it away too. Then use a pair of sharp scissors to cut all the way round both sides. 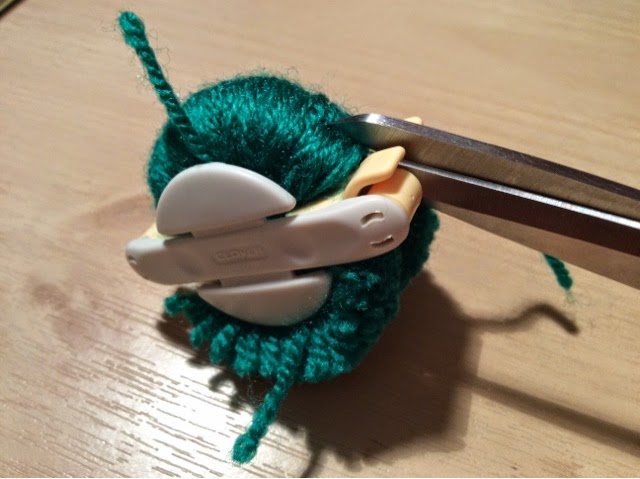 6. At this point you can see the beginnings of a pom-pom :) 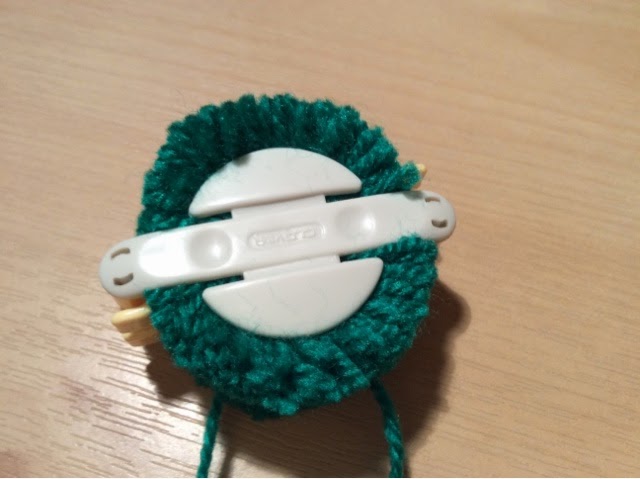 7. Tie a length of yarn round the middle to catch all the pom-pom strands together. Make sure it's nice and tight, do it a couple of times to be sure.
8. Now for the fun part! Open out the foldy-out arm things on both sides, then separate the white flat front and back from each other (they are held together by a pin and come apart fairly easily). Ruffle it up and ta-daaaa - a lovely squishy pom-pom :) 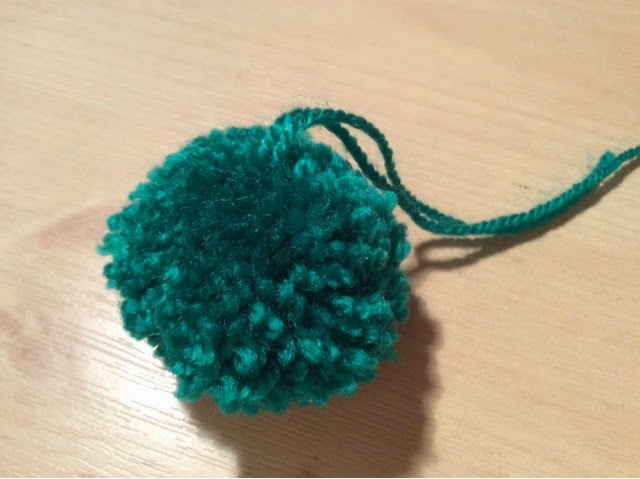 Back to the wreath. I used some green fabric - leftover from an old book-rack thing that bit the dust - the fabric formed pockets for the books to lay in. I cut the fabric into strips, wound it around the wreath and pinned the ends in place. 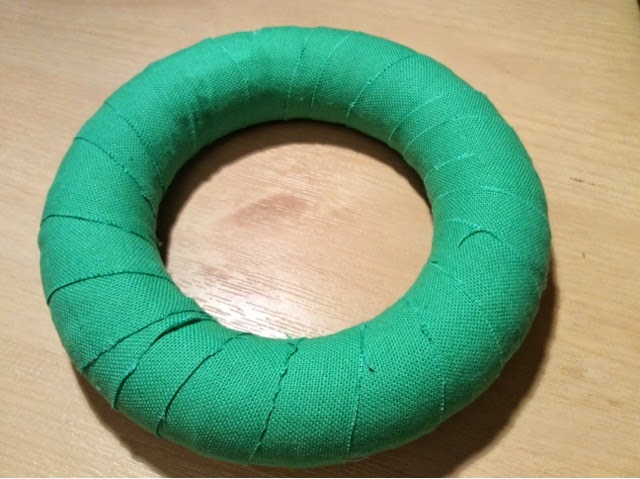 The pom-poms were also pinned in place .... 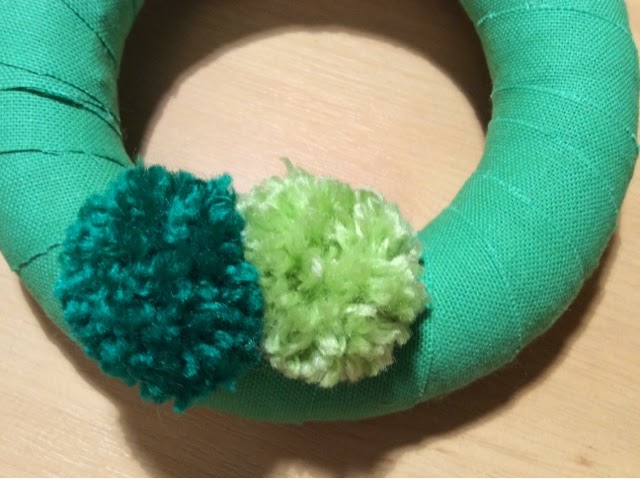 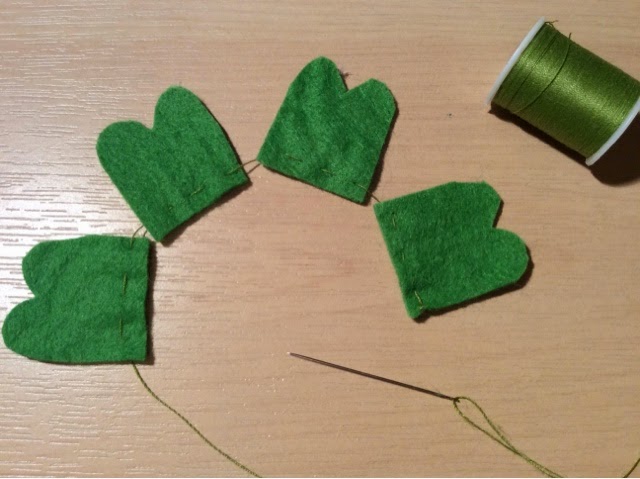 .... and gathered then together into a sort of shamrock .... 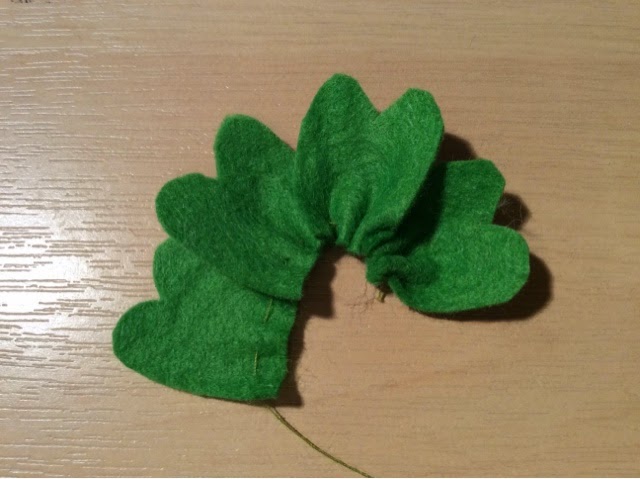 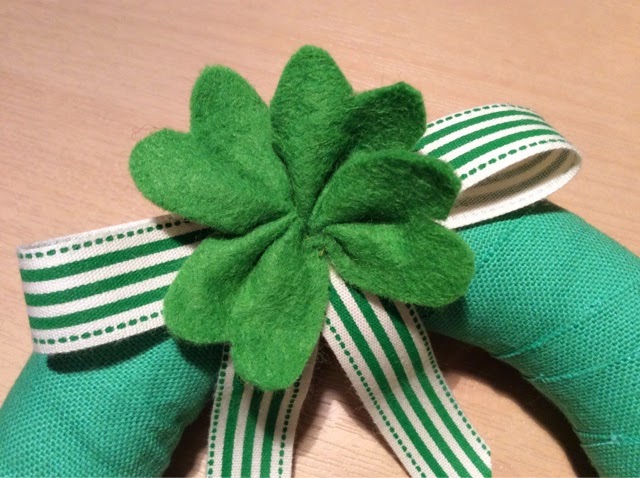 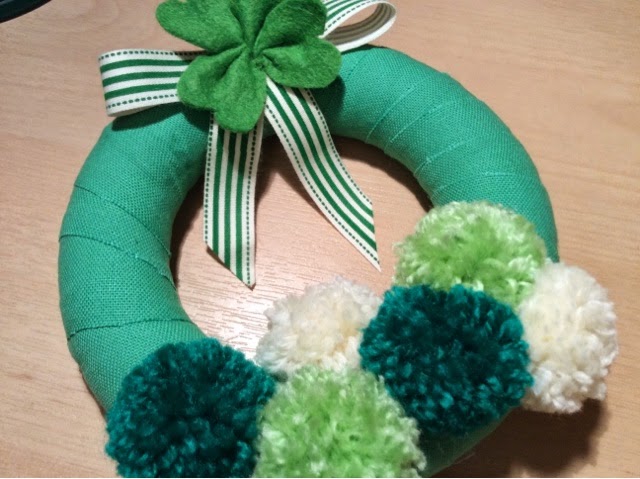 Jill
xxxxxxxxxxxx
Posted by Jill at emeraldcottage at 21:26