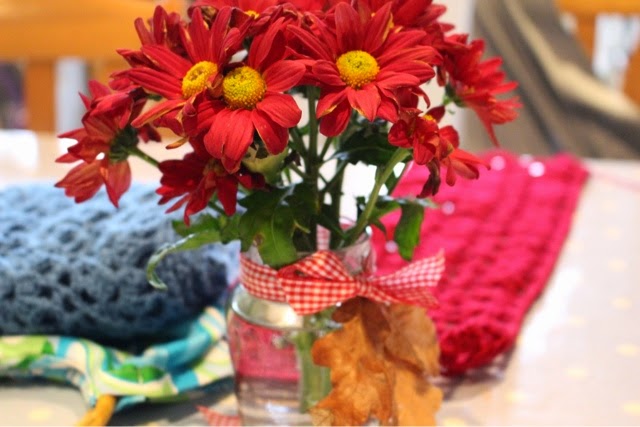 Autumn is well and truly here. Actually it might even be winter. Suddenly it feels cold all day, the greyness doesn't lift and the drizzley mizzley rain just keeps coming. Yes, yes, I know I shouldn't complain, and I don't really mind the rain or the cold, it's the grey dreariness that I Do Not Like. At. All.
I spend a lot of my time being a Mum-Taxi so when the Little People are at school, and it's grey and rainy out, I choose to stay in and surround myself with colour to counteract the blah-ness outside. 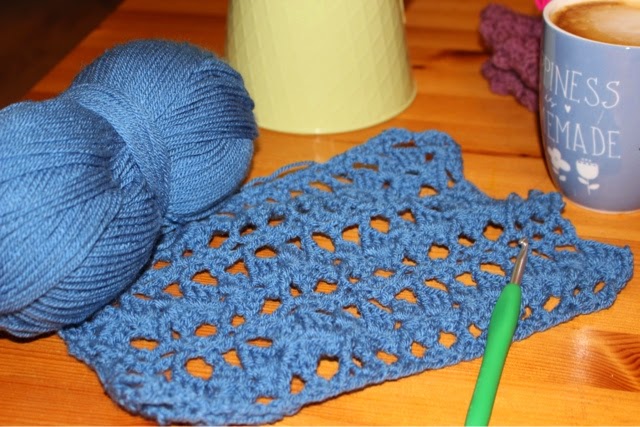 I've been working on a few scarves this week, Christmas presents for various teachers, helpers and friends. I'm using a pattern called Blue Velvet, it's from issue 18 of Simply Crochet from this summer I think. The pattern is brilliantly simple and yet gives a really lovely effect that looks far more impressive than it actually is. If you see what I mean. 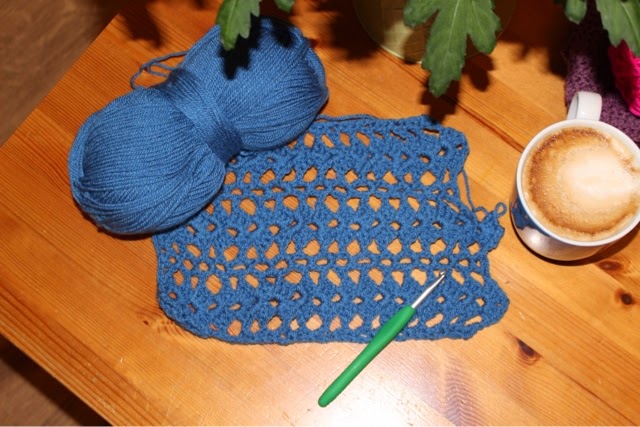 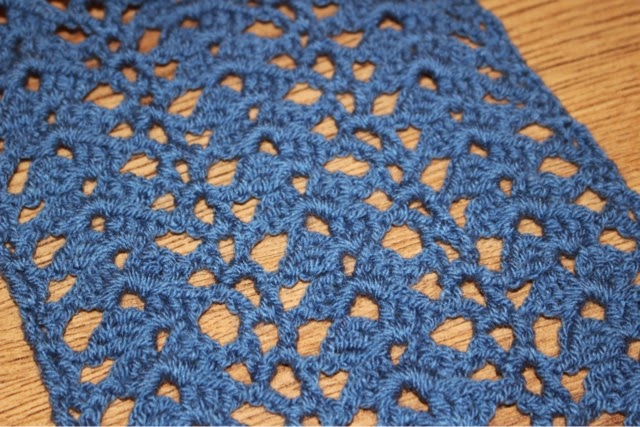 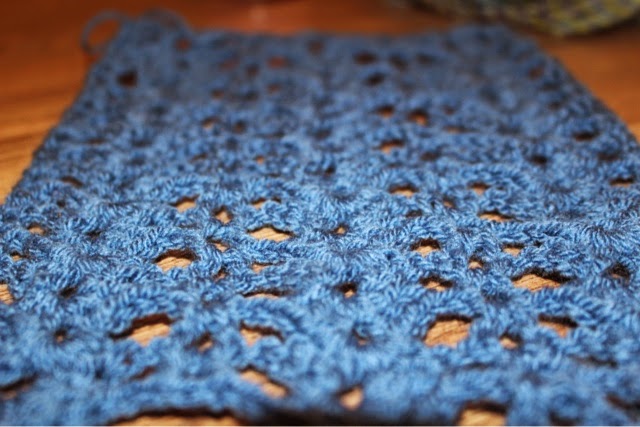 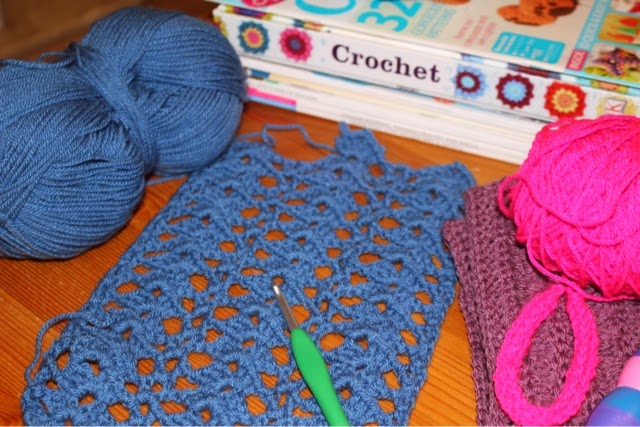 The blue one - I'm calling it Midnight Velvet - is for our Brownies leader, Brown Owl. "Why isn't it brown then ?" I hear you cry. Well, I've been noticing, Brown Owl's leader-y outfit is largely Girl Guides blue, so I decided on blue. Plus I like blue better than brown. Coincidentally, Little Tomboy accompanied her big sister to Brownies for the first time this evening. And she enjoyed it. Even though it was only girls. Bless her cotton (boys') socks.

Anyway back to the crochet. Do you like the bluey-greeny yarn below ? Do you think it's gorgeous ? Well, looks can be deceptive, it's good old James C Brett Marble Chunky. Easy as it is on the eye, I don't find it as easy on the hook. I bought it ages ago to make a cushion cover with because easy to hook with or not, the colours are divine. But I need to psych myself up for it first. And I'm not ready yet. 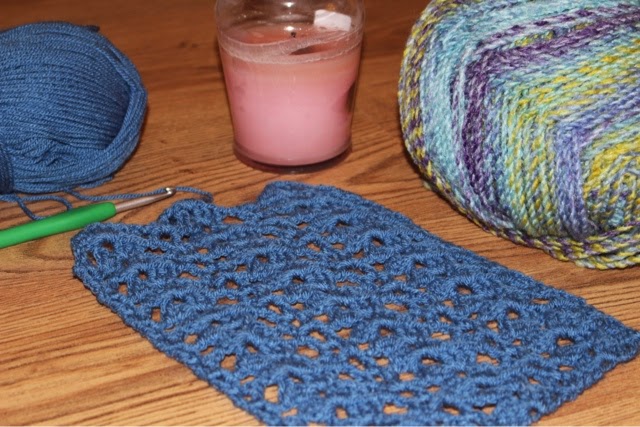 The red version of the Blue Velvet scarf - I'm calling it Cranberry Velvet - is for my friend's birthday. I'm using King Cole Bonus DK, 100% acrylic, and a bargainous £2.99 for 100g, which is just the right amount for a scarf. It's divine to crochet with, glides off the hook, is soooo soft, and a gorgeous colour to boot. 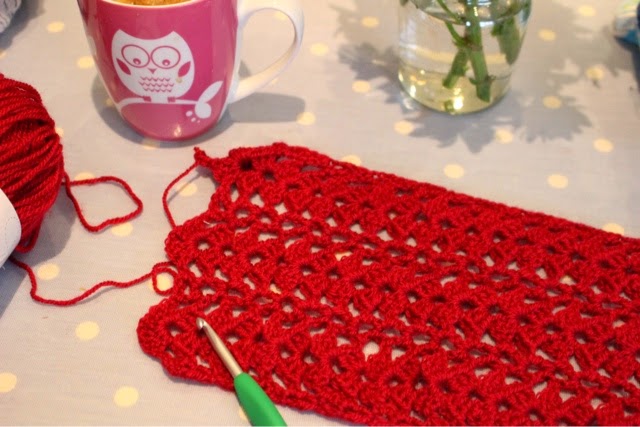 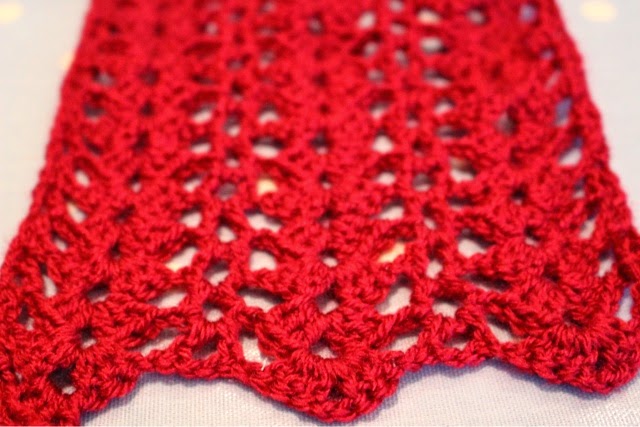 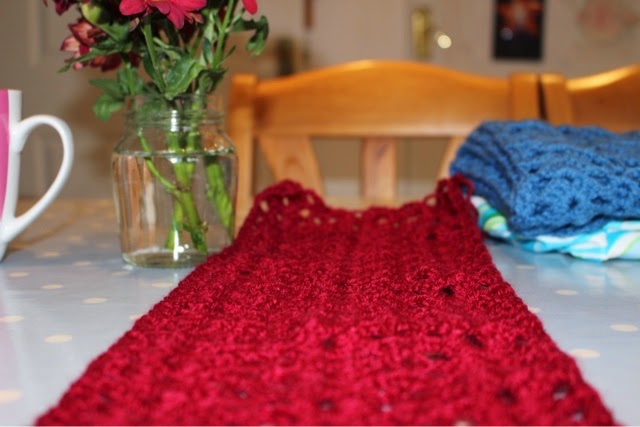 I Adore that colour :) Just like a red carpet on my kitchen table. Heavenly :)

And the colour doesn't stop there, the red squares for the Poppy Pixel Art are all done, ends darned, and I delivered them to the assembly team today. Can't wait to see them all joined up, it's going to be amazing! 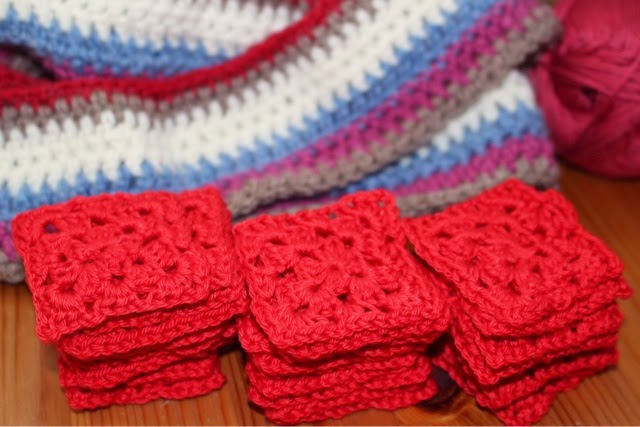 Meanwhile, in other news, Little Miss has been doing some French knitting on her knitting dolly. Initially she was making some sort of hair braid thingies for her Halloween costume (some kind of pink girl vampire I believe), but judging by what's lying on the table, I'd say she got bored and turned it into a bracelet :) Going with the creative flow, adapting as she goes, that's my girl :) 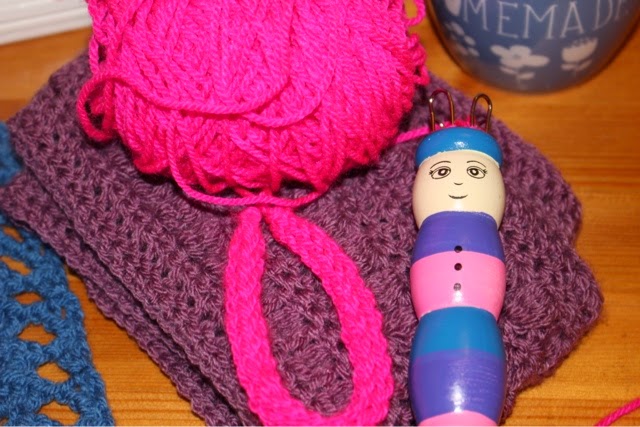 I love love love my crochet, but I do flirt a bit with other crafts too. I seem to have a gazillions things I'd like to do, but somehow crochet always comes to the fore. However I was reading through my bloglist last night and I visited the lovely Kate at Just Pootling who has made some really sweet table arrangements. You can read about them, and see some great photos, here.
I had some rather scraggy looking wine-coloured chrysanths which I thought I could eke out for another couple of days, but only if they were in a jar that took one's attention away from the slightly wilty petals. And so I totally shamelessly pinched Kate's idea. Thank you Kate! 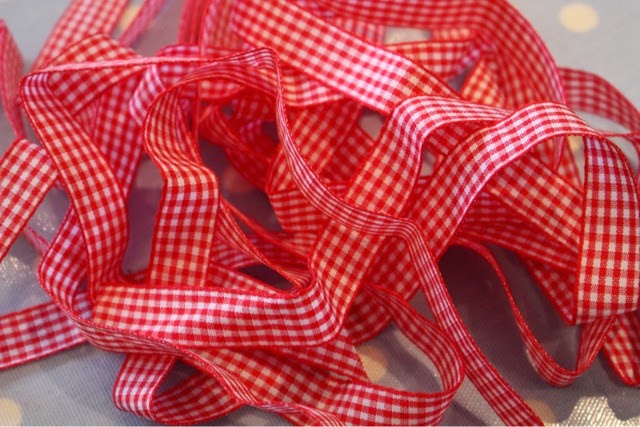 I fancied trimming my jar with red gingham ribbon. Had a rummage in my stash and found 5m of ribbon I'd bought last year, wrapped on a piece of card. Really Really Annoyingly the ribbon had been folded end to end and then wound onto the card, so that both ends ended up under the rest of the ribbon! Argh! So I had to unravel the whole lot! (Does that make sense ?) But never mind, it makes a pretty picture :) 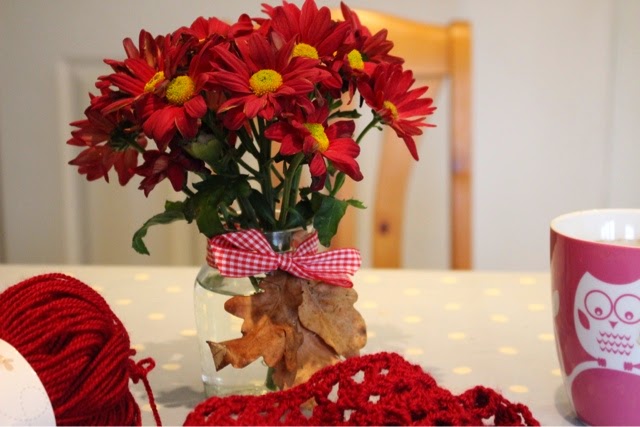 It's a really simple idea. Gather a few nice dry autumn leaves. Either go out on a dry day a-gathering your leaves, or go to your porch which you haven't swept for ages so there's a big pile of dry leaves which is lucky because it's pouring with rain outside beyond said porch. Make some holes in the top of the leaves, thread onto thread or string, and tie around jar, then tie ribbon around jar overlapping thread and top of leaves.  Stuff in Arrange, some half-dead flowers that you're too stingey to chuck out just yet. Add some foliage from your garden unless it's raining in which case I'll let you off. And Ta-dah! You have a pretty and rustic table arrangement:) And thank you Kate for the inspiration :) 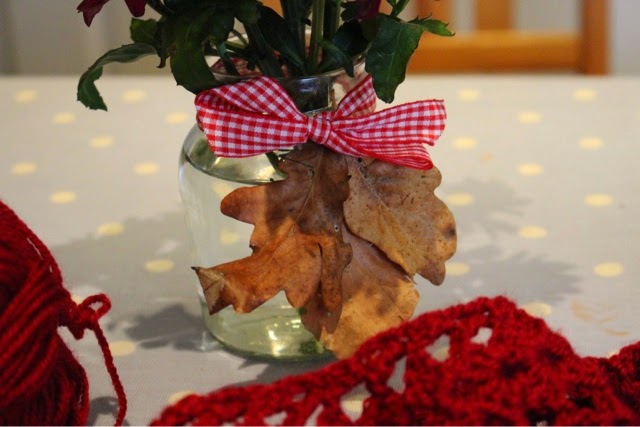 (ps it was only when I revisited Kate's page to link to it tonight that I realised we have used very similar flowers - except Kate's are in a slightly more healthy state :)

And somehow this has brought me back to Brownies again - Little Miss came home with a letter saying next week she is going for her Hostess Badge (blast from the past! I had that one) .... and she has to make a table decoration .... so Kate you are inspiring her as well :)

xxxxxxxxx
Posted by Jill at emeraldcottage at 22:41