Ah the Rose Blanket. Long-suffering, much-maligned, often cursed. Ridiculously fiddly motifs, annoyingly long stitches, not enough of one colour, and much smaller than planned. I can't tell you how much this flipping THING has irritated me. I didn't have a lot of love for this project during its production, can you tell ?? Don't worry though, there's a happy ending. 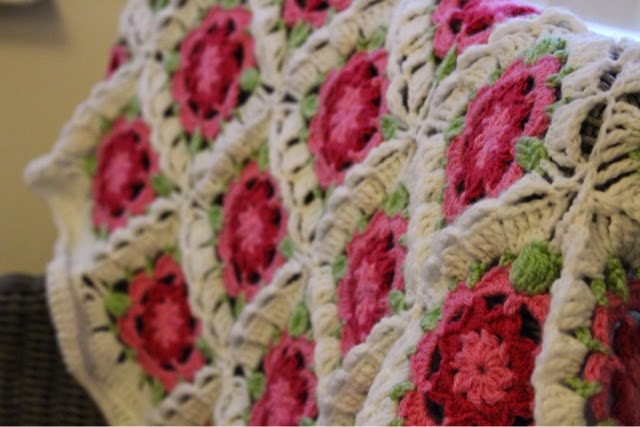 I first spotted the pattern for the Dog-Rose Blanket in a magazine called "Crochet Gifts" that I bought ages ago, probably in about May of this year (haven't seen it for sale since!). It's also the pattern featured on the front of the book "Granny Squares: Over 25 Creative Ways to Crochet the Classic Pattern" by Barbara Wilder.  (http://www.amazon.co.uk/Granny-Squares-Creative-Crochet-Classic/dp/1844488403/ref=sr_1_6?s=books&ie=UTF8&qid=1415914485&sr=1-6&keywords=Granny+squares).

After a rummage in my stash I found I had just the right colours. 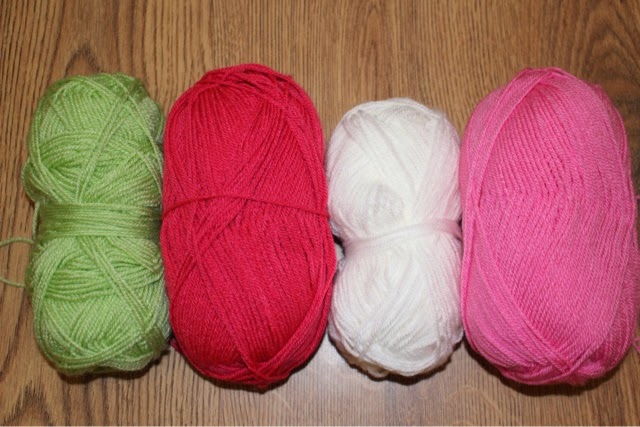 However, there were some warning signs: I didn't like the name (I've re-christened it simply the Rose Blanket) and the baby for whom it was intended had already been born. As usual I thought "no, no, it will be fine, I'll whip up half a dozen squares a night, be done in less than two weeks, fab". JILL!!!!! Do you not know yourself AT ALL????? 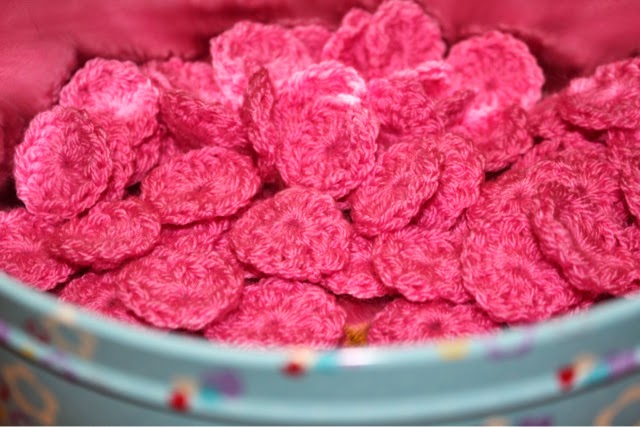 Firstly, I don't whip up anything when crocheting in the evening, I fiddle, faddle, get distracted with my phone, my cup of tea, the internet, the telly. Secondly, I can't produce several squares a night because I work up all the round 1's, then all the round 2's, and so on. Working this way ought to be quite efficient - less rooting around in the basket for the right colour, and you sort of get into the groove of the pattern for that round. 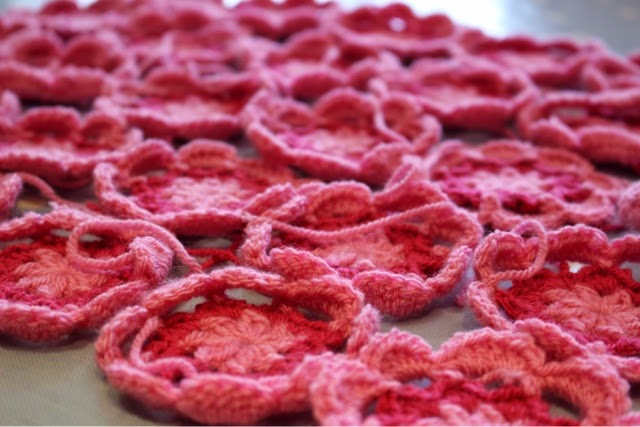 Of course in reality, working up 60-odd of the same fiddly round over and over is a bit t.e.d.i.o.u.s so the distraction sets in, and cancels out the efficiency. Thirdly, try try try as I might, I find it really hard to start a project and focus on it right through to completion without starting a few more projects, and perhaps even finishing another little thing or two, along the way. 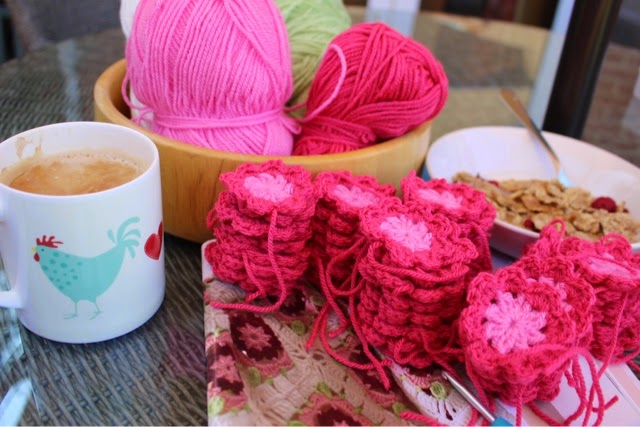 I plodded along with the blanket through the summer. I crocheted in the house, in the garden, in the park, just a little at a time and my little flowers began to blossom. 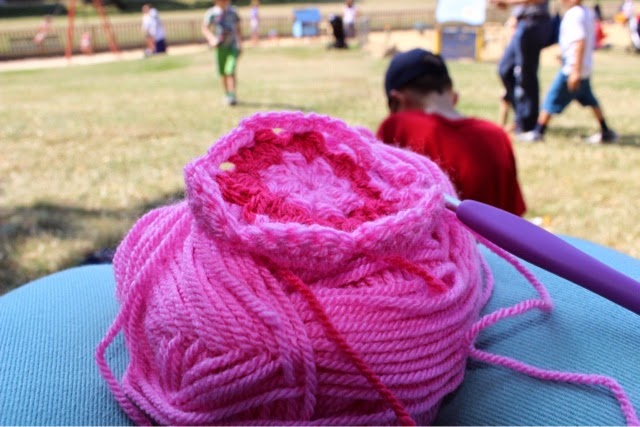 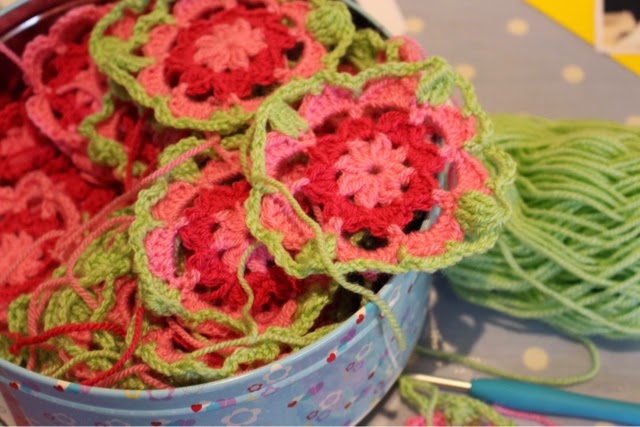 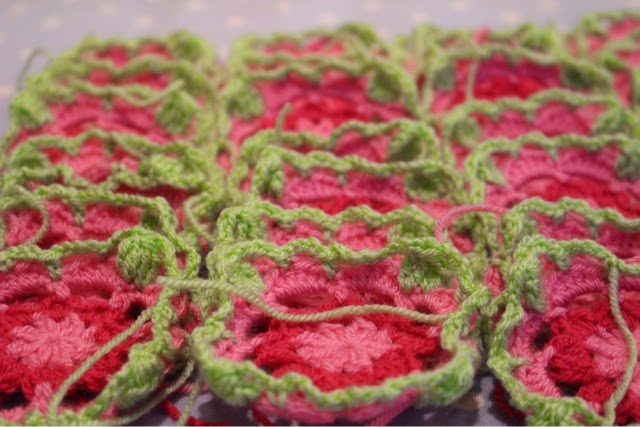 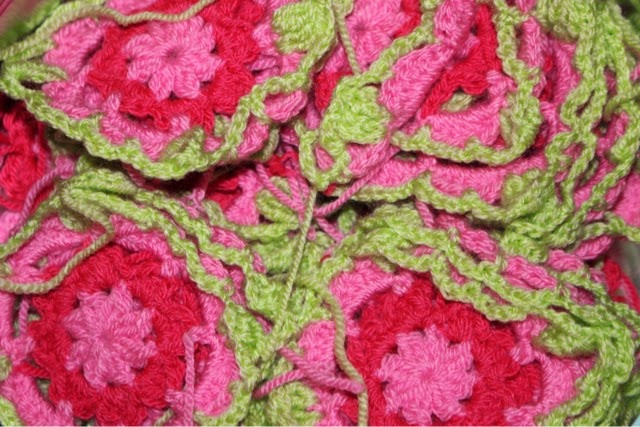 We went away on holidays and when we got back there was my little tin of squares (well, flowers actually) waiting patiently for me to resume working on them. And so I continued working on the blanket as summer turned to autumn, and I moved from crocheting in the mild evenings outside to working inside in the warmth, and as the days grew shorter, I was by now reaching the final rounds. 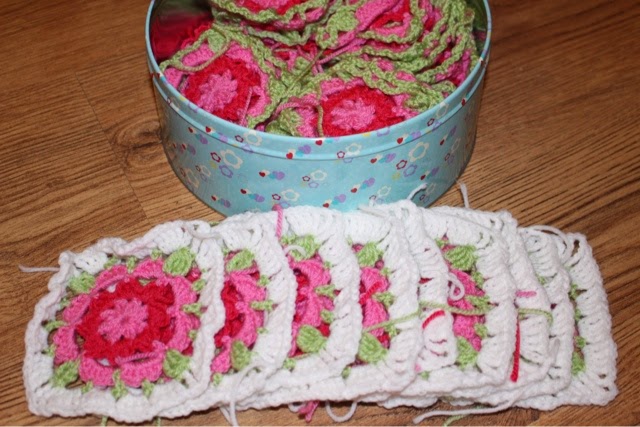 The flowery and leafy bit of each motif - the light pink centre, dark pink ring around it, then the pale pink outer petals and the little green leafy touches, were all worked in the usual (UK) stitches - chains, doubles, half-trebles and trebles. But the final round, worked in white .... groan. Like big, major G.R.O.A.N. All the stitches in that last round were either double-treble or triple-treble. Triple treble ??!!! Whoever thought that one up needs a good talking to. Loopy, saggy, long stitches, and they take ages to do. Never Again. Ever. 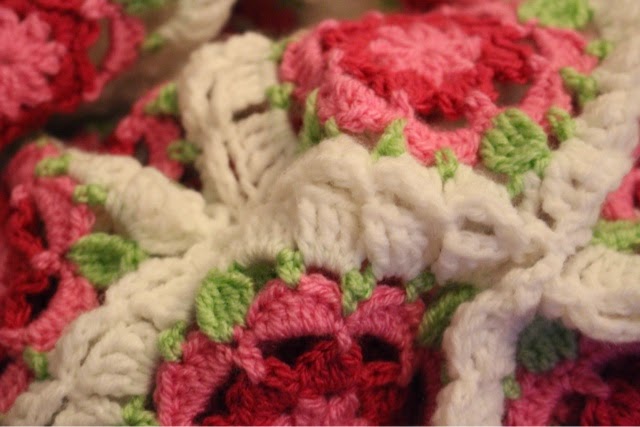 I was tempted to rip out the white and redo it in a less loopy stitch, but I couldn't face redoing the ones I'd done, so I kept going, on and on and on ...... and now several months after its start, it's finally finished. Hurray hurray whoop whoop etc :D

And I must say I totally love Love LOVE it :) The colours are divine, just like a big slice of yummy cake, and the fiddliness was totally worth the effort, I think the detail is gorgeous: so delicate and yet a bit chunky at the same. 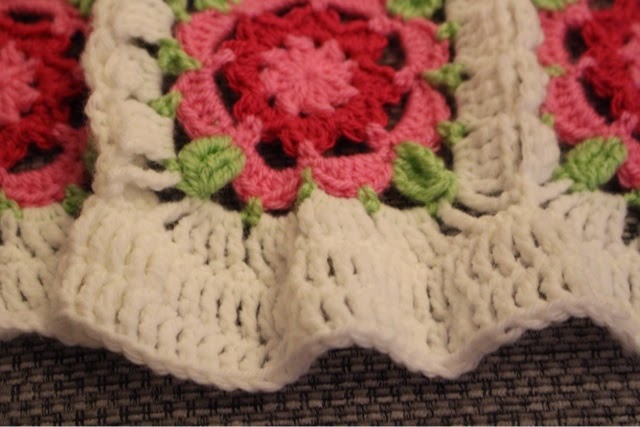 The pattern has a scalloped-y edging but I decided to stop at the two rounds of double-trebles, they give it a nice ruffle without being overly fussy. 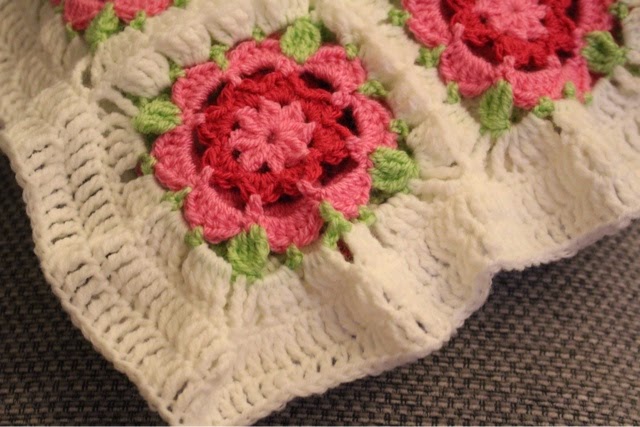 The squares were all joined using the join-as-you-go method, and I love the starry effect this gives at the point where 4 corners meet. 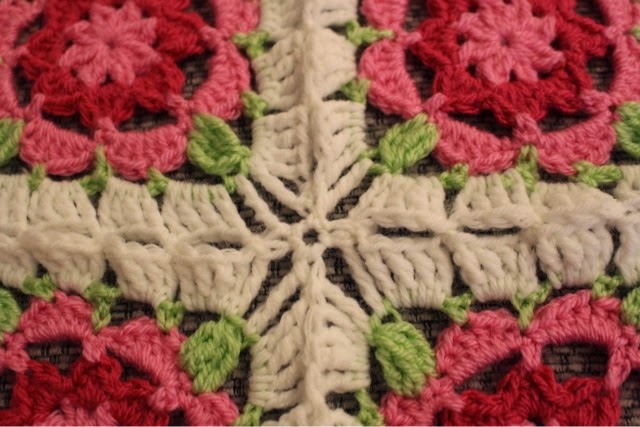 I made my blanket smaller than the pattern (ok so I did run out of the light pink) but it's the perfect size for snuggling, so my snuggle expert tells me. 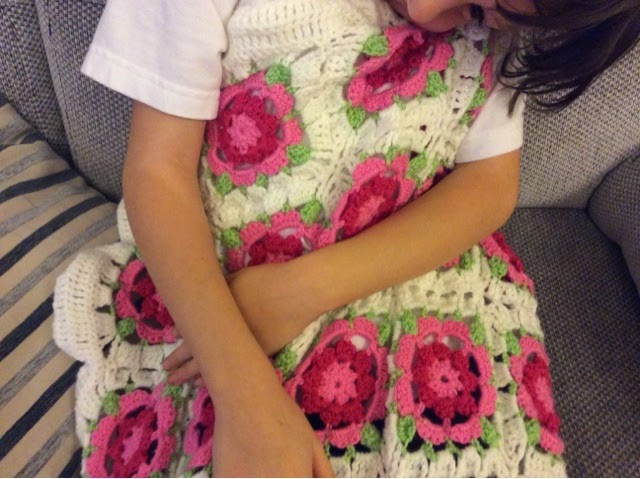 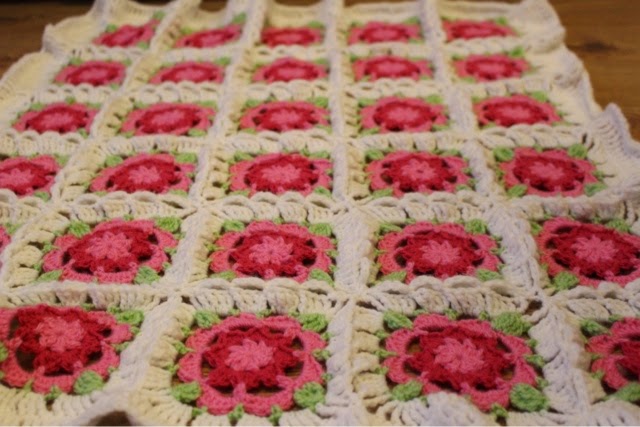 It's going to reside draped over the back of a dark grey wicker chair I have in my front room, and I love the contrast of the white over the dark grey. The edging is meant to lay flat, but I like the softness of the ruffled edge so I am not going to block it .... what a rebel, eh ?! 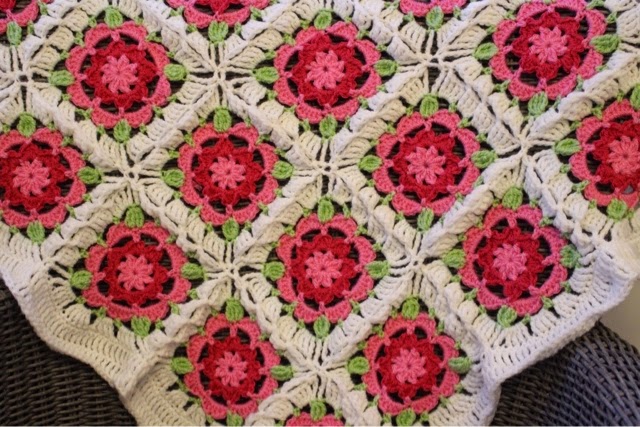 Now it gets a bit embarrassing really. Long story short - the blanket was meant for one baby - then it got too late really - and then for a second baby - but it's getting a bit late for that too now (and no I still haven't made anything else for them. I'm rubbish at deadlines). Plus I think the blanket is just a bit too holey for a baby, I know what little fingers and little fingernails are like for catching in things, and I already caught one of those stupid triple-trebles on a door handle, so it's not really that practical for a baby. Also my husband suggested that the parents really won't appreciate all the effort that went into it, as it was hours and hours and hours of work, and I think he's right. So I've decided to keep it :)

And the snuggle-tester is very happy about that - can you spot her underneath ? 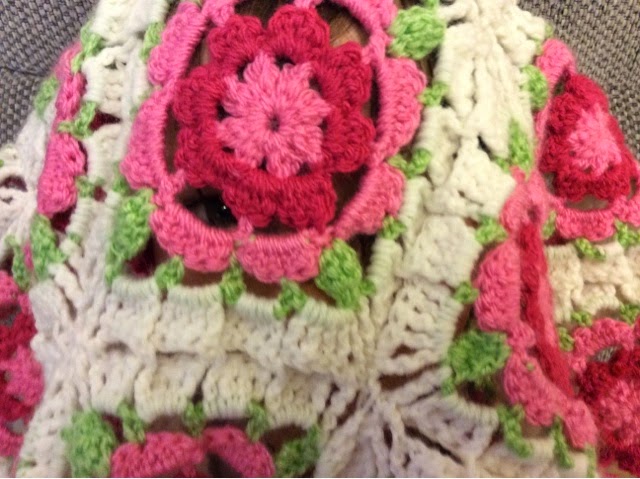