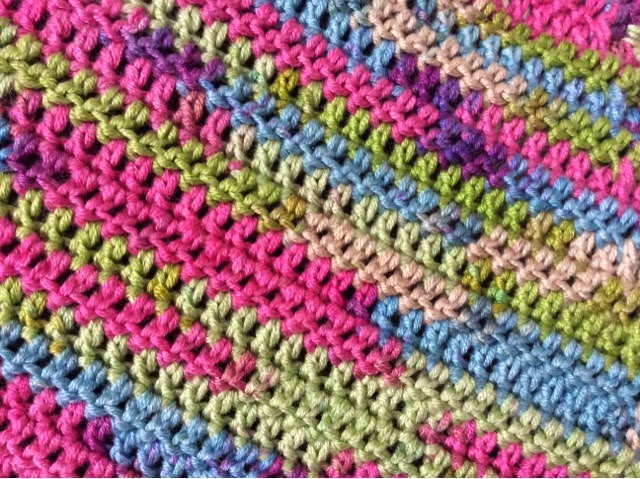 It's been a few weeks since my last post, I've been feeling a bit flat, and haven't felt much like blogging. We're trying to sort out medication to help Little Man at school, and we are now on the 3rd different lot. The desperate hope then crushing disappointment is taking its emotional toll on him, and on me. First lot didn't work. Second lot were AMAZING but then he couldn't sleep. At all. He had 2 nights of no sleep whatsoever and of course then we had a terrible few days. The jury is out on the 3rd lot. The effect is short-lived so only people in school will see a difference. He can't tell if there's a difference himself, and I'm waiting for feedback from his mentor. We have a review with the doc on Tuesday where we will either try yet another lot or possibly change the dosage of the current one. Meanwhile he is not where he should be in school and essentially has lost most of this school year. Frustrating doesn't quite cover it. 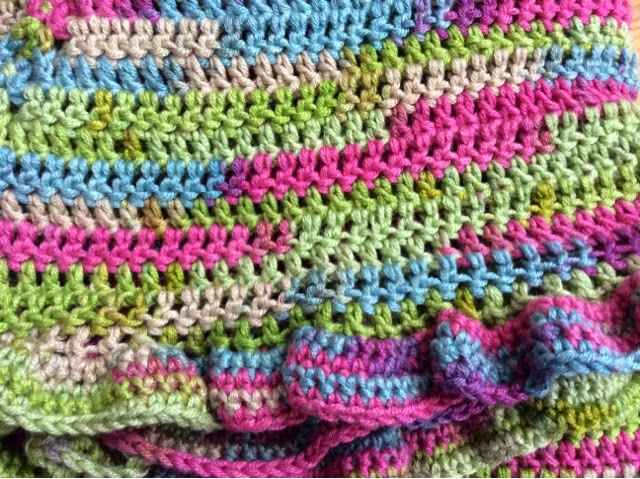 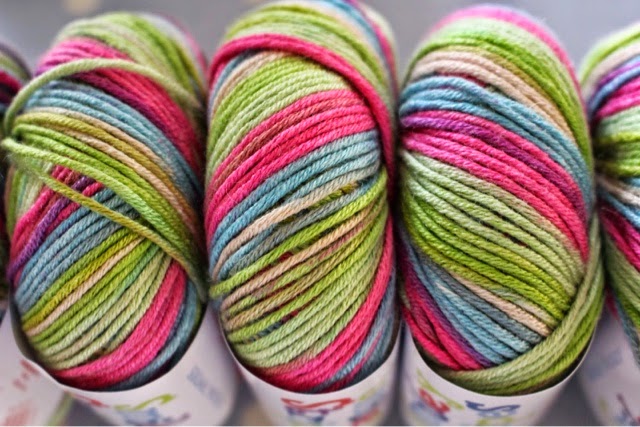 I bought this yarn ages ago (http://emeraldcottage.blogspot.co.uk/2014/07/lazy-days.html) because it was a bargain. Thats a good enough reason isnt it ?? It sat in my stash for months, I just couldn't decide what to do with it, but I kept getting it out for a snuggle :) It's Sirdar Snuggly Smiley Stripes, 80% bamboo and 20% wool, and is so silky soft to work with, just gorgeous. Its very similar to working with embroidery floss. The yarn itself has no give whatsoever, but the finished piece is beautifully stretchy, flowy and drapey, I absolutely love it. 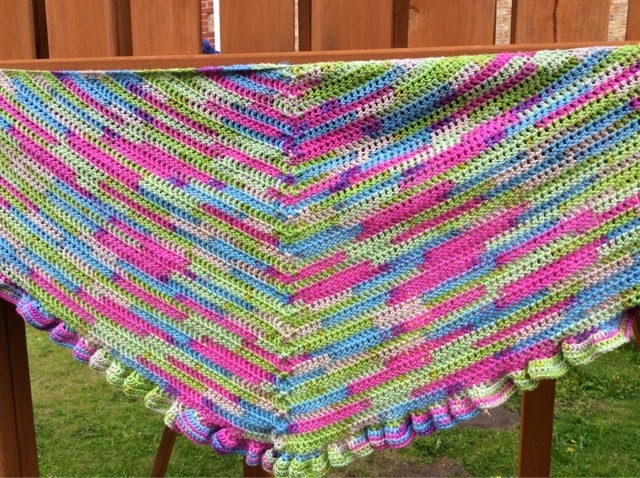 The pattern is the "Precious Jewel Frilled Neckerchief" from Simply Crochet issue 28. It's a very straightforward pattern, just rows of trebles with 2 increases at each end plus 2 increases in the middle. There is also a slight raised effect down the centre where a couple of front-post trebles are worked, but I'm not convinced that the effect was worth the bother, it's very subtle. 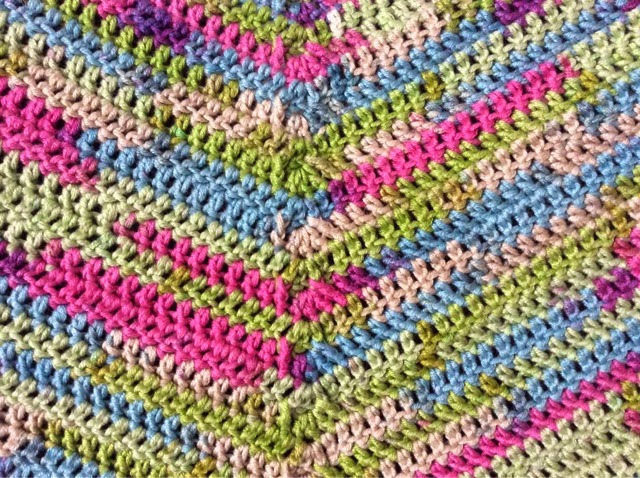 The edge is several dc's worked into each treble, then several rows of 1 dc in each dc. It gives a lovely gentle rippley edging. 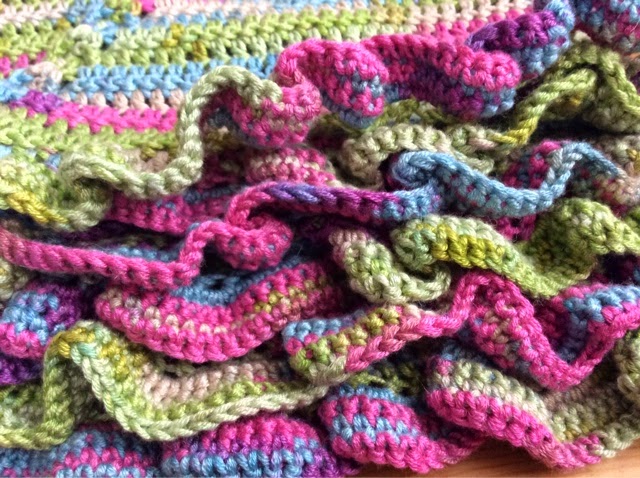 The colourway is called Balihoo. What a fabulous name for a yarn colour! Very Northern Irish sounding, I think. I'm sure a ballyhoo was slang back home for a party or similar. So I've decided to call it my Ballyhoo neckerchief. 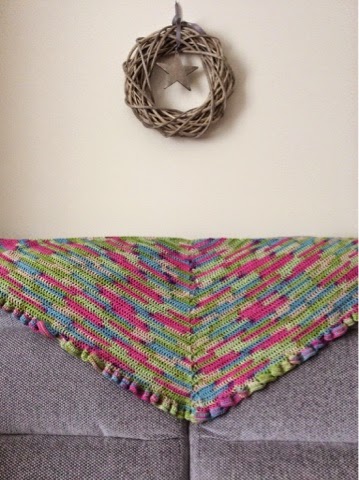 As it's traditional, I went a bit bonkers taking endless photos of the Ballyhoo ..... here is a selection .... and there's even one of it's creator modelling it :) 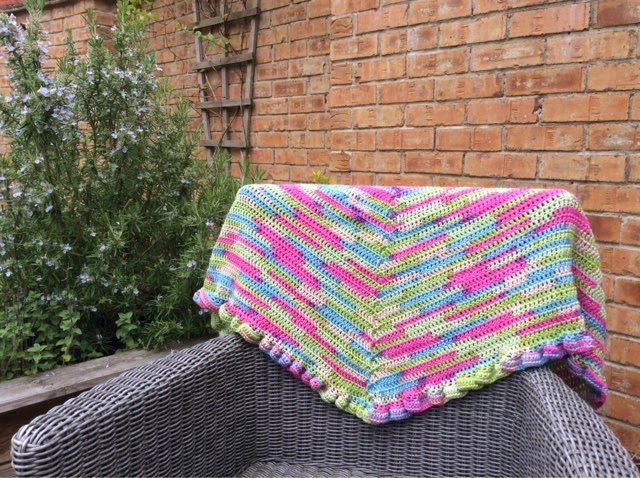 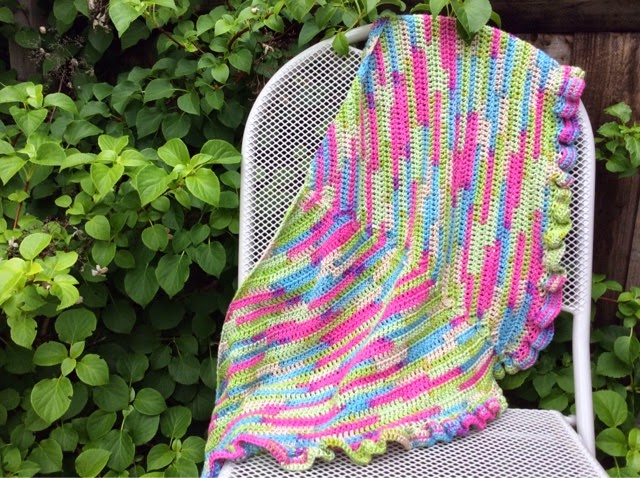 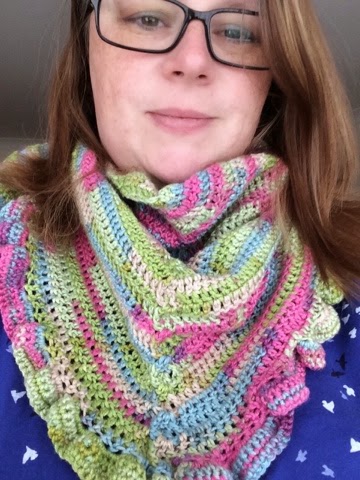 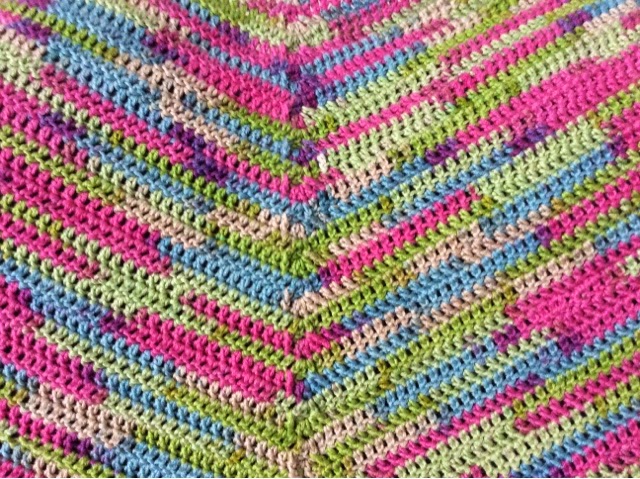 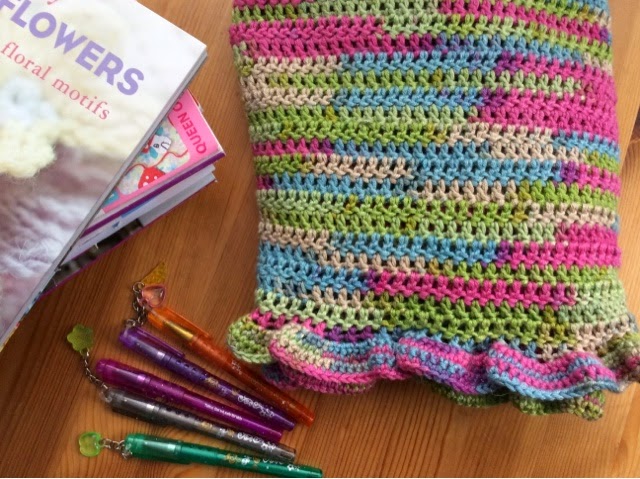 Its my birthday this weekend - on Sunday - so I'm sure I'll be back soon after that with photos of presents and cake :) Happy weekend,
Jillxxxxxxxxx
Posted by Jill at emeraldcottage at 19:45 21 comments: