May (and March and April) Days

Hello strangers, remember me ???!!!! Lost my blogging mojo for a while there, nothing worrisome going on, just life etc. 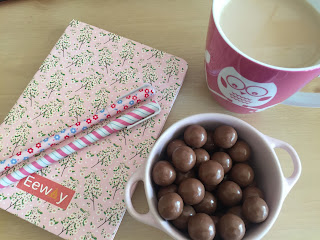 We had two weeks over in NIreland for Easter. You may remember that my Dad died at Easter last year, 2016. Very sadly, my uncle, my Dad's twin brother, died a year and 3 days after my Dad, just before Easter 2017, and of the same thing - cancer that had spread to lungs and stomach. We all just couldn't believe that the family had had to go through the same thing all over again. My Dad was the baby brother, well actually when they were born there were triplets, but the 3rd baby didn't survive, so technically my Uncle was the eldest and my Dad was the middle one. We took the children out of school to travel over a couple of days early for my Uncle's funeral, and once we had the funeral done we were able to settle down and enjoy our time over there. All the extended family are going to my cousin's wedding in a few weeks, and we were all saying how it will be lovely to get together as a family for a happy occasion for once. Whilst over there we had some lovely days out which I think deserve their own post so I'll share those another time, but for now here's a pic and maybe you can guess where we went. 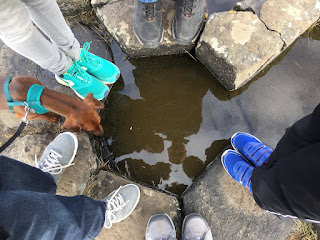 As you may or may not know I am training for the New York Marathon (New York Baby!!!!) in November, and have been doing lots of events as part of my training. I did an obstacle colour run (where they throw paint at you while you leap around on big bouncy castles - such good fun) with my daughter .... 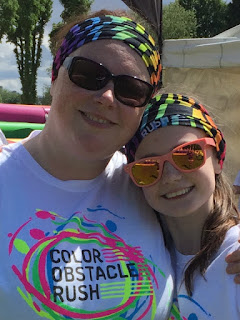 I also did a triathlon with a friend .... 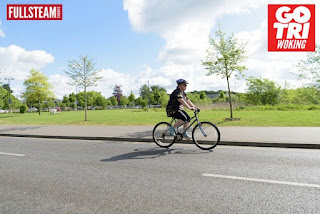 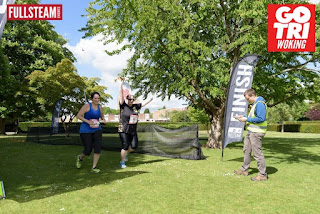 As you can see the weather was fantastic for both of those :) Sadly (or fortunately depending on how you look at it), there are no photos of me during the swim section of the triathlon!
I've also been doing parkrun every Saturday morning. For those of you who haven't heard of parkrun, it is a free timed 5k event that runs every Saturday morning at hundreds of parks all across the UK and indeed there are some international parkruns too. Its not a race, just a run, you can sprint, run, jog, plod or walk, and bring your kids, buggies, or dogs. I very firmly fall in the plod category and I don't bring the dog as it would freak her out. Parkrun is very inclusive, runners of all abilities are welcomed, and it's free, as the whole thing is run by volunteers. 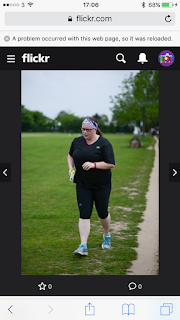 In other news our activities as a family have been somewhat curtailed by the fact that Little Tomboy broke her wrist! She fell off the playground play equipment at school, and although it wasn't REALLY bad, it was bad enough that she had to have an operation under general anaesthetic to straighten it. On my birthday. Hurrah. First time I'vve ever left the house on my birthday at 06:30 - as we had to be there by 7am.
Here she is in hospital recovering from the op - still smiling bless her - no overnight stay required thank goodness. 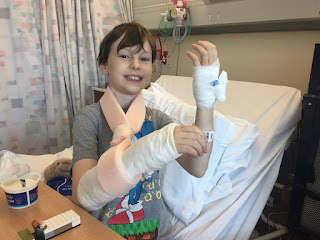 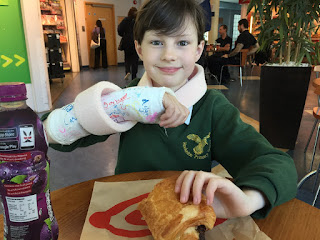 That's us in the hospital cafe having breakfast before her 08:30 appointment! 08:30! Have you ever tried to get a 9 year old to a hospital appointment in the centre of town before breakfast in rush hour traffic at the same time as getting the other 2 ready and off to school and then realising the patient has got dressed in normal clothes not school uniform even though she is going to school later so you've had an argument with her to get re-dressed. It wasn't terribly fun. Luckily the hospital cafe does a pretty good latte and The Best Pain Au Chcolat In The World, so that eased the pain. I am pleased to report she is doing very well, her arm barely hurts and she'll have the cast for just another couple of weeks. Currently we have covered the millions of signatures (very cool but she was bored of them!) with some rather fetching camo tape bought off amazon. And she's STILL smiling :) 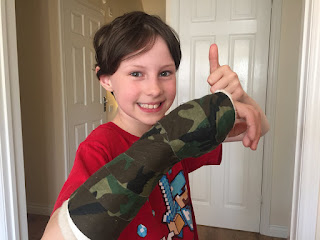 Tomorrow we have Mr 13's birthday, he will be Mr 14. He's having 9 friends to go paintballing and very disappointingly I'm not allowed to join in. Too embarrassing obviously. He's very into his artwork at the moment, does a lot of computer art, loves media studies, animation and computing, but he also loves drawing and sketching with what I call Proper Pens. And Proper Pencils. At least I hope they're proper because they cost enough! Here's a little sketch that he did the other day in a cafe while we were waiting for lunch. With just the one blue pencil. I just love this and its pinned above my desk. 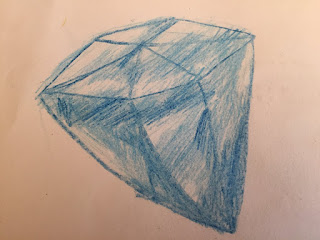 I popped into Hobbycraft today (can you tell whats coming) to buy him some more Proper Pens for his birthday but I seemed to come out with a load of yarn and fabric. No idea how that happened. 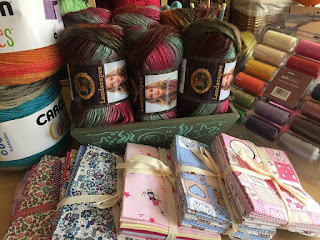 The fabric was reduced so of course I HAD to buy it, and I just loved the colours of the yarn, I'm going to use the Lionbrand Lamdscapes Yarn for a shawl/wrap and the caron cakes for lap sized blankets. And now I really really must stop buying craft materials of any sort. In fact I feel a no-spend challenge with associated blog posts coming along sometime soon ...

In crafting news its all been about the unicorns.  I'm selling them for charity to fundraise for my marathon for the National Autistic Society (Mr 13-soon-to-be-14 has autism). One lady wanted a large unicorn so here's what I made for her. The credit for the pattern goes to a lady called Marina Chuchkalova whose pattern I purchased on etsy. 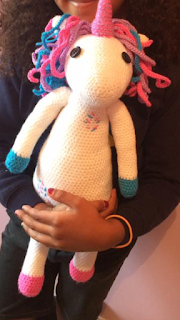 I've also made loads of little ones but don't seem to have a photo. I'll take one of the next one I make. Other than the unicorns not a lot has been happening on the crochet front. But I'm hoping to rectify that this weekend, I'm going for a spa weekend for my cousin's hen-do, as these things go it's going to be a fairly non-rowdy event so my crochet is coming with me and I intend to sit about, drink prosecco, and do my crochet, all weekend :) Bliss!

Posted by Jill at emeraldcottage at 17:46 12 comments: