Oh my goodness it's been 4 weeks since my last post!! Where has that gone?! It's properly autumn now here, all beautiful colourful falling leaves and crisp first thing in the morning. Only this week to go then it's half-term, the year's flying by ..... 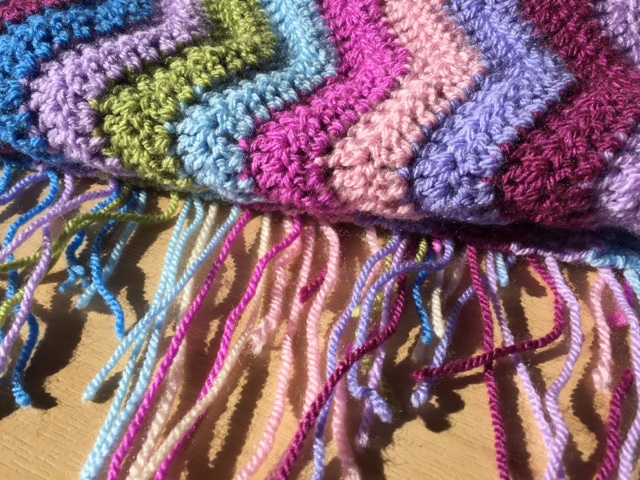 My big news since my last post is that I've launched my Facebook page .... www.facebook.com/jillemeraldcottage :D Launching it makes it sound like it was a massive event, well it wasn't. Although I did have to make sure I had a few things lined up to share on there. I'm hoping to use it as a platform for selling a few bits, my aim really is just to fund my yarn habit. I've made a couple of sales already .... 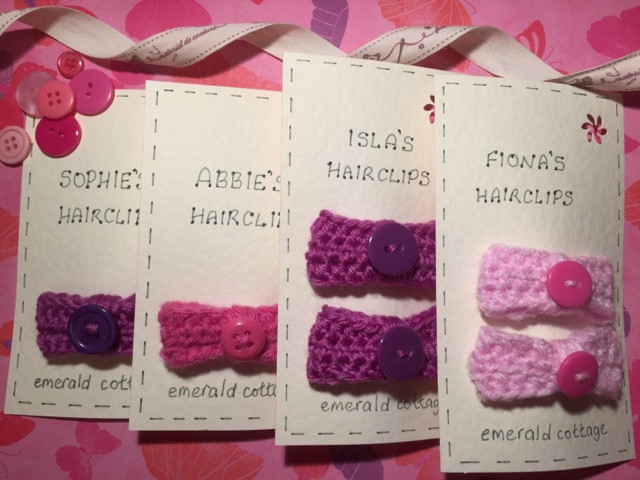 I hope I can keep the momentum up, and that it wasn't just beginners luck.

If you fancied visiting my page and giving it a Like or a Share that would be lovely thanks, so far it's my real-life friends who have Like'd and bought things, and obviously that's quite a limited market place. Some Likes further afield would be really great :)

The upside of a blogging break is that I do now have lots of things to show you here.
Last time I posted I was making Sewing Kit Jars. I sold two of these .... 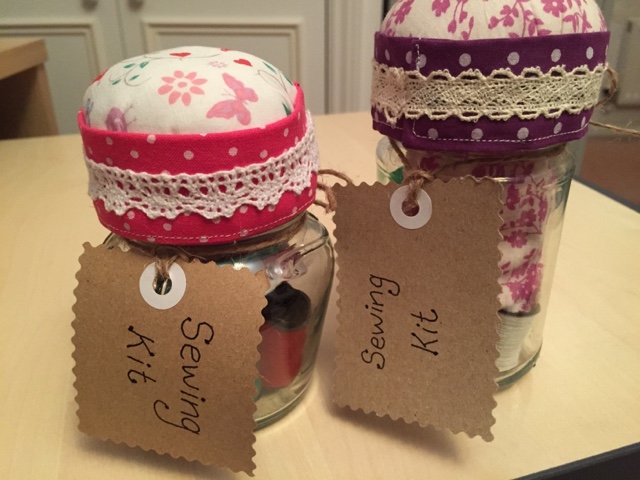 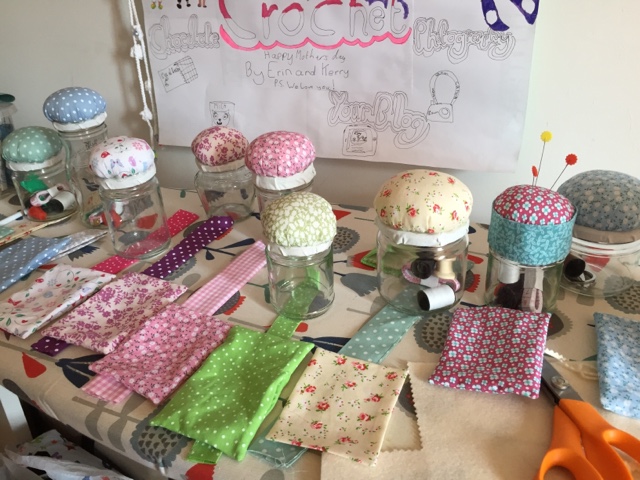 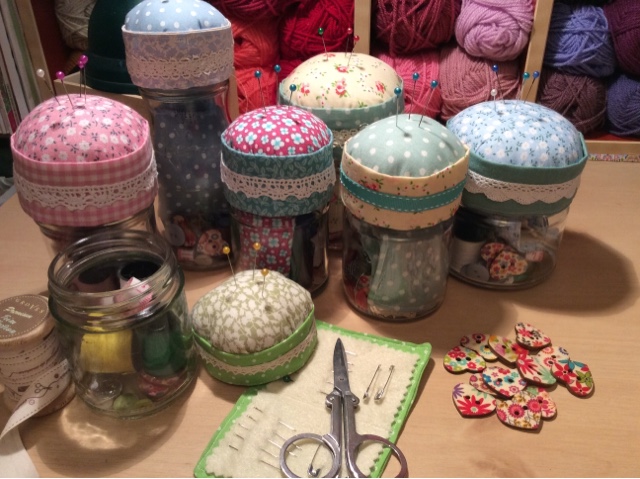 I've made another memory cushion, for the same friend as the last memory cushion (http://emeraldcottage.blogspot.co.uk/2015/09/everyday-cowls-and-more.html). My friend has a Dalmatian, and her late Mother had done a beautiful Dalmatian cross-stitch. The cross-stitch was very grubby and had rust marks and black pen marks, plus one side was stitched with about 4mm between the stitching and the edge of the fabric, making it really hard to secure. But I managed to sponge out the marks, and turn the skinny edge under just enough to make it usable. 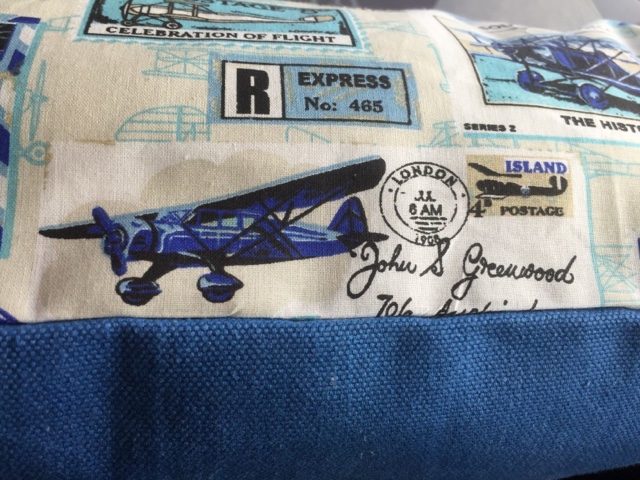 I've had the dark blue fabric in my stash for about 14 years. I bought it as a tablecloth years ago but it never fitted my table. I used part of it 12 years ago to make a drawstring bag for my son when he was at nursery, and the remainder has gone through a couple of house moves with me, like a faithful friend.
The airplane fabric was bought for another project but there was just enough left to make this cushion cover. 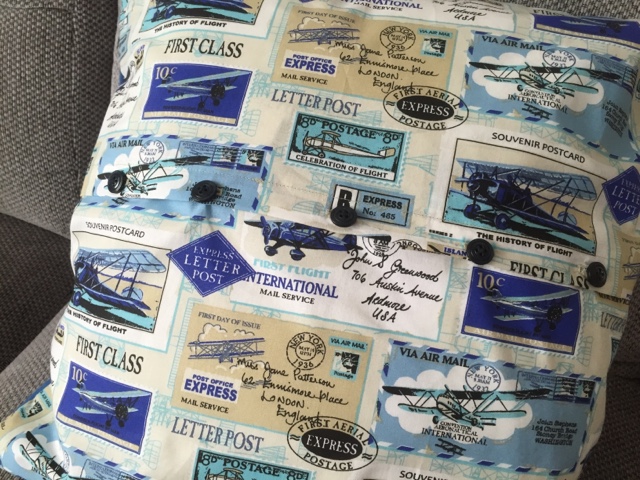 I braved the button-hole foot thingy on my sewing machine for the second time in 20 years :) And I did 5 buttons in the end. 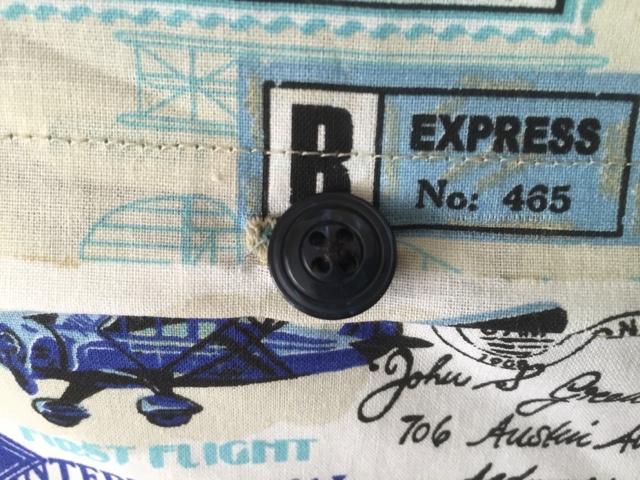 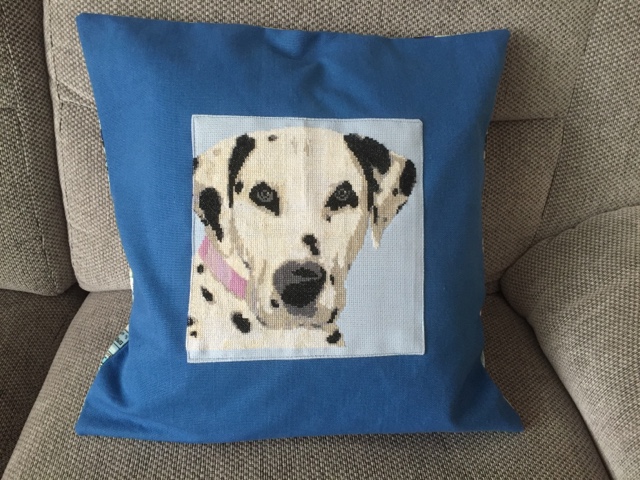 On the crochet front I've made a couple of little children's granny square bags, which my friend in Scotland ordered. I love making these, they are a really good one-evening project and simple enough to do in front of the telly :) The remit was - one girl likes pink, the other likes purple, and they both like turquoise as that is their Mum's favourite colour. I think I've met the brief ....? 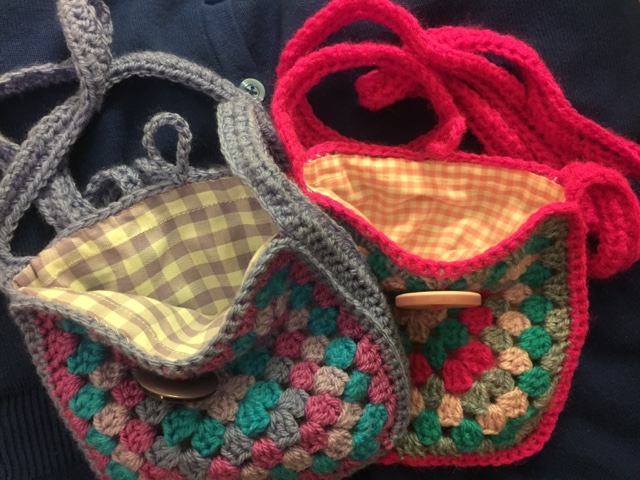 They're both lined and have a button fastening, just like the ones I blogged about here http://emeraldcottage.blogspot.co.uk/2014/12/children-granny-square-bags.html 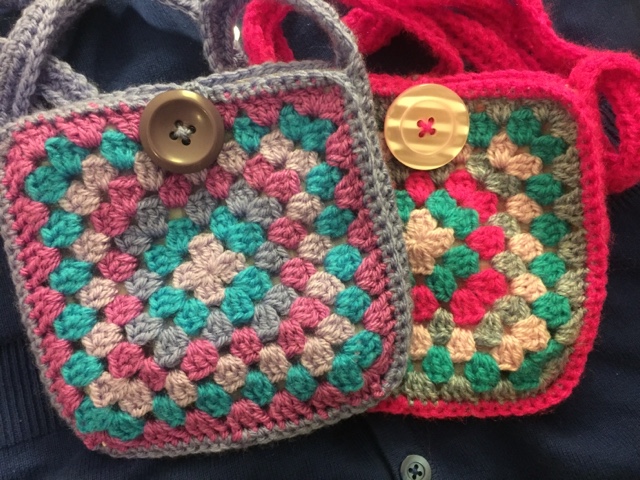 I've also been making key rings. Owls and hearts. Lots of pieces made but not quite assembled. 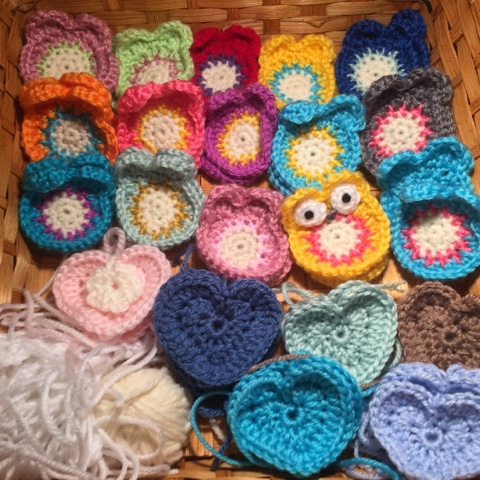 I'm doing a stall at our school craft fair at the end of November so I need a lot of small ticket items. I'm thinking mug cosies, Christmas stockings and decorations, fabric-covered note pads, pencil cases, doorstops, etc. Today I made my first Christmas stocking. I found this jumper in the charity shop .... 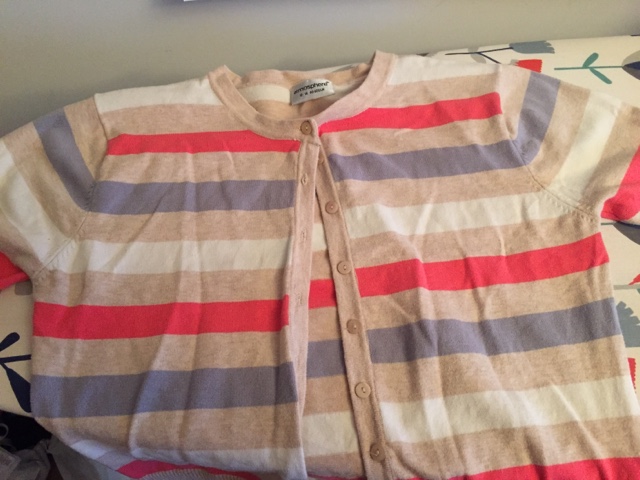 It's so soft, and the stripes just screamed Christmas stocking at me :) 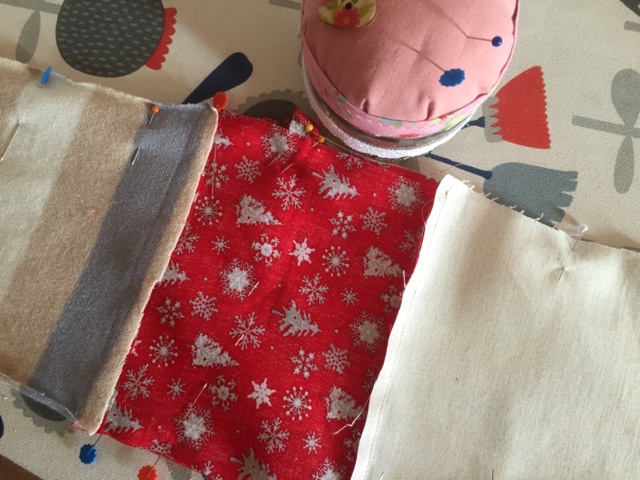 It took a while to get the pattern exactly as I wanted it, as each stocking is made from 13 pieces, but now that I've made one (and it looks quite good if I do say so myself :) it should be easier to run up a few more. 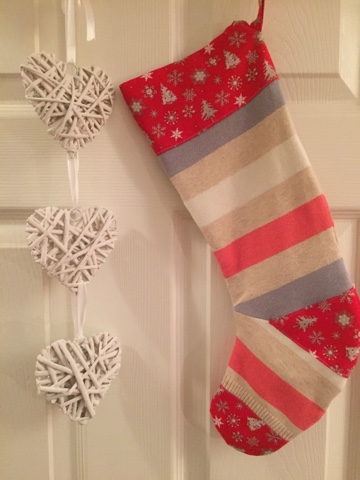 The stripey bit is a knit fabric, the red bits are plain old cotton. I've always been scared of sewing with knit or jersey fabrics but it worked like a dream. 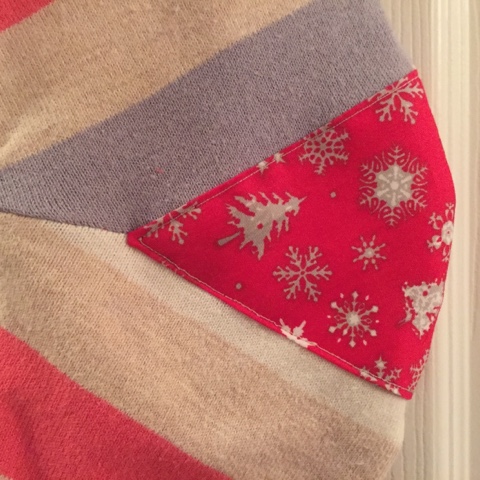 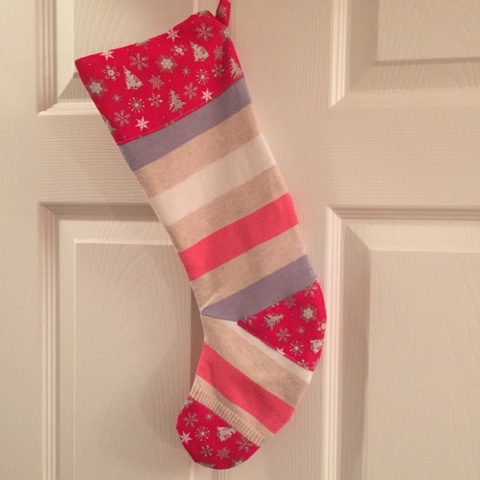 Now my dilemma is how much to charge ? I asked a couple of school Mums and floated the idea of £10 and they looked at me as though I'd said a thousand. I don't want to under-value the amount of effort I put in, but equally there's no point in even making the effort if noone wants to buy the thing. Little Tomboy helpfully suggested that a price of £2 might be better. Aaaah bless her. But no.

I have so many ideas, I find it really hard to focus on one thing at a time, but I'm hoping that the deadline of the fair will focus me. My friend makes cards and we are sharing a stall, I think our things will complement each other nicely.

Oh one other thing I wanted to show you .... I was doing a bit of clearing out old stuff and look what I found - the ceramic nameplate from my bedroom door from when I was little. Can't believe I still have that, isn't it fab :) 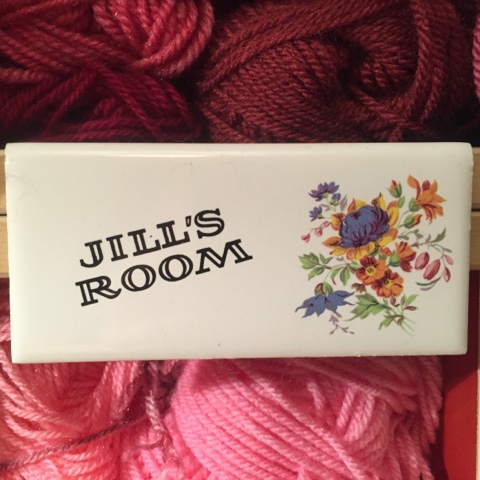 Posted by Jill at emeraldcottage at 17:47