I've been a SAHM (stay at home Mum) for a good number of years, but as a former "career girl" I still struggle with the fact that I'm "just" a housewife. Now, I must point out that I don't go round judging other Mums who stay at home, or thinking they deserve less credit or respect than women who work, it's just a role that I personally find tricky to settle into. I think it stems from the fact that I HATE HOUSEWORK. But doesn't everyone ??? It's Just. So. Repetitive. Plus the fact that at every meal time there is at least one person refusing to eat (never me, but not always a child either if you know what I'm saying ....), and I may not be the best chef but I don't think I'm that terrible.

The lovely Carrie from Northwoods Scrapbook does a "Happy Homemaker Monday" post every Monday (obviously) so I thought perhaps if I join in and embrace the homemaker-ism I will finally start to face facts that a Homemaker (capital H) is what I actually am! (and yes I do know I'm very lucky that we can afford for me to not have to go out to work). So off we go then ..... 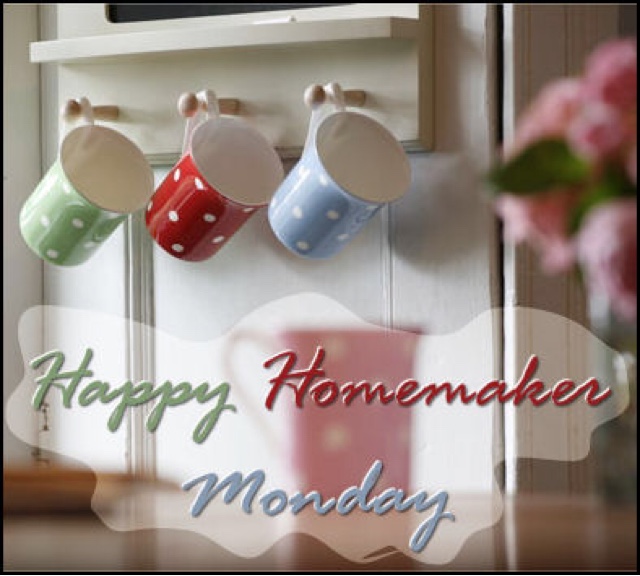 THE WEATHER OUTSIDE IS:
Surprisingly mild, it's been a very mild winter, daffodils all over the place already! 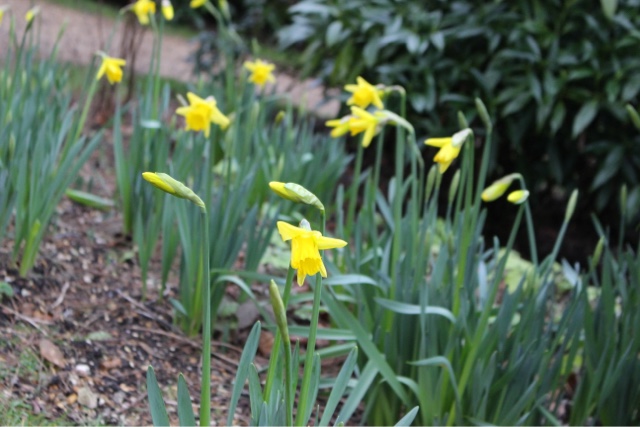 ON THE BREAKFAST PLATE THIS MORNING:
Normally I have porridge but I've got a horrible cold at the moment and was in need of naughty comfort food so I had chocolate mini weetabix, which is the hubby's favourite, they are dangerous if you ask me, so full of sugar, and you can't possibly stop at one bowl....
AS I LOOK OUTSIDE MY WINDOW:
I really must tidy the garden up, it looks even worse than usual in winter because:
a) I never got round to power washing the patio last summer and
b) the grass has grown more than usual due to the mildness so its a bit unkempt.
Neither of which excuses the completely dead plants at my front door - this is how it's meant to look ..... 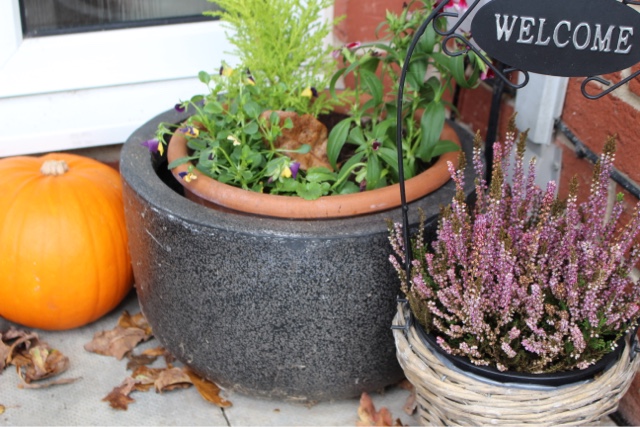 .... minus the pumpkin, of course. I'm not showing you a photo of what it's like now as you will run away and never visit me again.
RIGHT NOW I AM:
Feeling really rubbish with a stupid head cold that I really don't have time to be having :(
AS I LOOK AROUND THE HOUSE:
One word - laundry!!
ON TODAY'S TO DO LIST:
As you know I'm running the London Marathon in April (OMG) to raise funds for the National Autistic Society, and am fundraising like crazy. I've been blown away by the generosity of people and when I asked for donations for a raffle (do other countries have raffles where you win prizes ?) I received lots of gifts from normal mums like me, nothing fancy, no TVs or anything, just lots of nice ladies' gifts. So today's job was to collect a few more donations from some very kind people. Here's a small selection of what I've been given to date .... 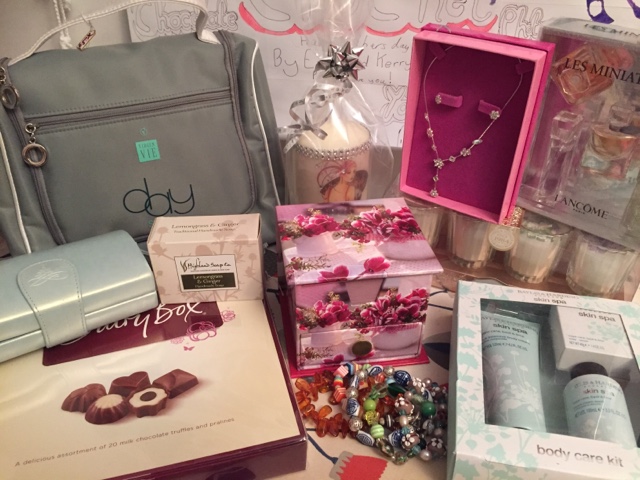 .... This is probably around a quarter of what I have, a very kind friend gave me all her old jewellery stock from when she was a Virgin Vie Jewellery rep, and another lady gave me 4 bottles of champagne! I can't thank them all enough :)

CURRENTLY READING:
I've just bought 2 second-hand crochet books, I love crochet books - even if I don't make anything from them I love flicking through them for inspiration. 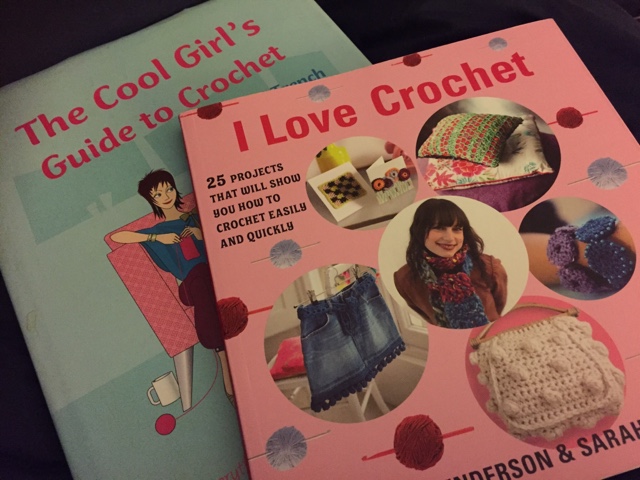 ON THE MENU THIS WEEK:
I'm gearing up for a Five on Friday post of slow cooker meals, so that's the inspiration for this week's dinners :)
Monday - Quorn paprika - here it is cooking .... 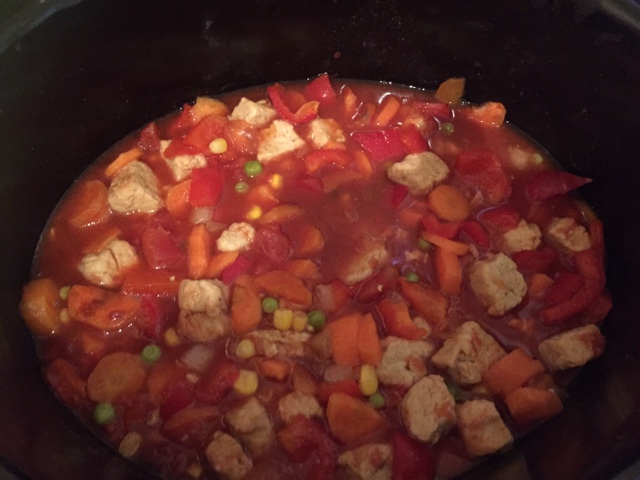 Yum! It's just Quorn pieces, onion, sweet corn, peas, carrots, peppers, veg stock, tin of tomatoes and a load of paprika. We have it with noodles and I stir in yoghurt at the end.

Tuesday - sausage caserole - been a bit lazy and bought a sachet for the sauce, but if it gets them all to eat it .... Served with new potatoes and carrots

Wednesday - 3 bean chilli - actually it's one type of bean (cannellini) and chickpeas but that doesn't make for a snappy title lol. Served with rice, I use Uncle Bens express sachets of rice. Maybe not as good or cheap as just cooking rice but better than reaching for the takeaway menu.

Thursday - prawn curry - a Jamie Oliver recipe but I add the prawns in at the end, don't fancy the thought of prawns festering in the slow cooker all day :-/ Again served with rice.

Friday - enchiladas - recently I found a great slow cooker recipe for this, it's fast becoming a family favourite. Served with guacamole and wholewheat tortillas.

I love my slow cooker, I am far more inclined to prep dinner at 10 in the morning when there are no whingers around, than after school when everyone is tired and grumpy. If anyone has any healthy veggie slow cooker meals (fish allowed) - send them my way please! And come back on Friday to see if I made all the week's meals in the slow cooker as planned!

WHAT I AM CREATING AT THE MOMENT:
Couple of things. I'm working on a bed blanket for a customer order, it's green and yellow squares in a checkered pattern with farm animal type things appliquéd on every other square. I'm pretty sure I've shown you the squares before ..... can't wait to finish the green ones, they've gone on forever ... 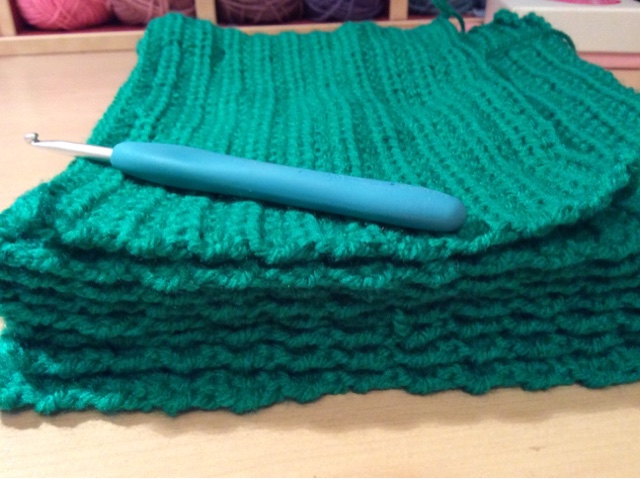 The squares are pretty dull, but I'm looking forward to doing the animals, they will be fun!
I'm also working out some little designs for some dinky little teabag tags .... more on that another day!

NEW RECIPE I WANT TO TRY THIS WEEK:
Well technically the sausage caserole is a new recipe as I haven't used a sachet before, and I've just realised I didn't check if it was veggie, remind me tomorrow someone ....

TIP OF THE WEEK:
Keep a pad and paper in the car .... I had to put a five pound note through someone's letterbox today and I forgot to bring an envelope with me, I had to go and buy a card, just for the envelope, as I didn't have time to go home, and I didn't want to put the fiver through the door on its own in case the dog ate it or something!! I'm sure I could have fashioned an envelope if I'd had some paper ..... maybe I should include an origami book too ??? But look how jolly a card I bought - sending it off to my Dad tomorrow (in another envelope of course lol) 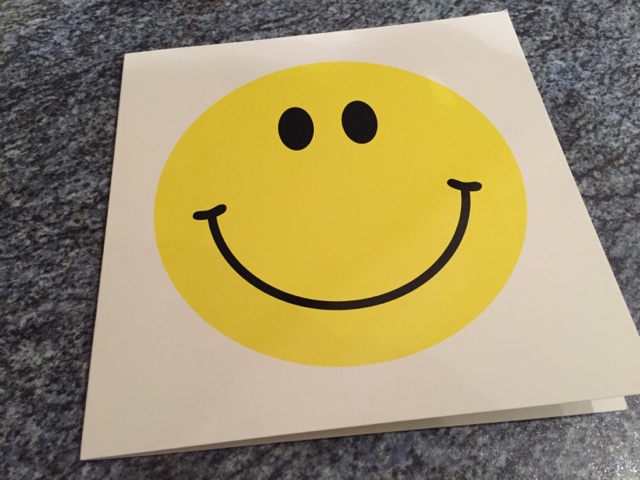 Linking in with Sandra from Diary of a Stay at Home Mom for Happy Homemaker Monday :)
Til next time,
Jillxxx
Posted by Jill at emeraldcottage at 22:59